Congratulations to Kate van Liere (history), the recipient of the 2022 Presidential Award for Exemplary Teaching.

The award is funded from an endowment established in memory of George B. and Margaret K. Tinholt. The cash gift is to be used for educational opportunities and experiences that will enrich the recipient’s career through professional and personal development. The recipient will be announced at the faculty award dinner in May.

Past recipients | About the medallion

Purpose of the Award

The Presidential Award for Exemplary Teaching is testimony to the fact that the heart of a Christian liberal arts university is the teaching by its faculty, who embody the goals of forming the Christian mind and shaping students’ lives. This award recognizes exemplary teachers and advances outstanding teaching at Calvin University.

Every regular faculty member who has been awarded tenure or a five-year renewable-term appointment is eligible for this award. Previous recipients may be nominated again for this award after four years.

Award recipients not only have exceptional teaching skills; they also consistently influence the lives and careers of Calvin University students in lifelong Christian ways. Award recipients will be selected based on the following criteria:

In the early spring semester, the dossiers are presented to the Professional Status Committee, which makes a recommendation to the president, who selects the award recipient. The dean and chair solicit comments from colleagues, alumni, and current students to supplement the above materials and to be used for the award presentation process.

In May, the award is announced at the spring faculty tributes and awards dinner.

The silver medallion which accompanies the Presidential Award for Exemplary Teaching has the Calvin heart-in-hand logo in the center, surrounded by symbols of the three offices--prophet, priest, and king—to which Christ and all believers have been called. All believers share in Christ's annointing. as prophets, we confess his name; as priests, we present ourselves as living sacrifices of praise; as kings, we battle against sin and the devil in this life, and reign with Christ over all creation for eternity. In the work and life of an exemplary teacher, we see these offices faithfully fulfilled. 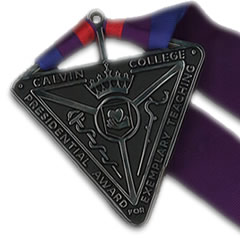 The crown symbolizes the office of king. Exemplary teaching means that we proclaim the lordship of Christ in our lives, in our classrooms, and in the entire cosmos.

Aaron's staff, in full blossom, represents the office of priest. Aaron was chosen by God to be his priest, and exemplary teaching demands that we show our students what it means to give God our lives in joyful sacrifice to him.

The snake lifted up in the wilderness symbolizes the office of prophet. As prophets, we lift up the name of the Lord and we testify to the good news of salvation in Christ. Exemplary teaching requires that God's glory and grace shine in all that we do and say.

The combined image of the Calvin logo ringed by the symbols of these offices represents the integration of faith and learning that characterizes exemplary teaching at Calvin University.

The tri-colored ribbon from which the medallion will hang also reflects the triple office of the believer: purple for the royalty of Christ, red for the high priest who became the ultimate atonement for sin, and blue for the voice of the prophet who declares shalom and justice by confessing the name of the Lord.

The Medallion was designed by Carl Huisman, Professor of Art (emeritus) at Calvin University, February 1996.