Mastering the art of practice 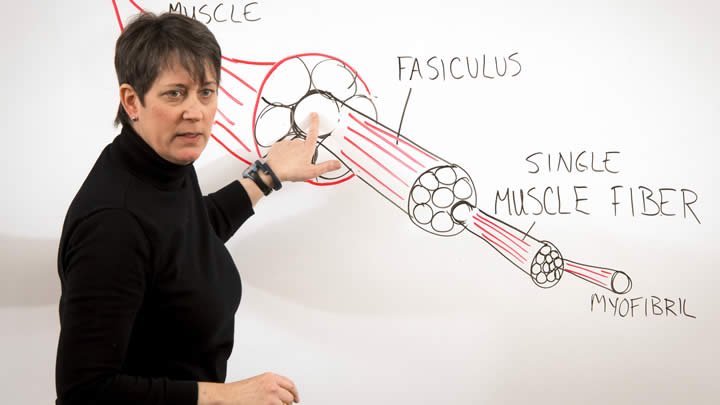 Julie Walton is the recipient of the 2014 Presidential Award for Exemplary Teaching.

Practice is a big thing for Julie Walton. In fact it’s at the heart of her teaching philosophy, an approach to her work in and out of the classroom that this year landed her Calvin’s Presidential Award for Exemplary Teaching, the college’s highest honor for its professors.

It’s a natural focus, said Walton, for someone with her background, a former college athlete who now works in the areas of exercise physiology and nutrition.

But the emphasis on practice has also become more nuanced and more layered as Walton has made her own commitments to becoming a better teacher and as she has worked at better understanding the Christian practices, including the practices of prayer, worship and hospitality.

“The Christian practices,” she said, “for me have played a huge role in how I think about my teaching, and also they have surrounded and undergirded the learning practices that I have tried to model for my students. We’re educating here for a bigger purpose. It’s a big, hurting world, and we need—and God calls—our students to be at work in it.”

A big part of that preparation for Walton is helping students learn how to learn, both in the classroom and lab and in their faith journey.

“I have observed that students are often not studious and have a poor concept of what a studious life looks like,” she said. “Year in and year out, students share with me that they struggle with the discipline of discipline. They find carving out time for a sustained and faithful relationship with God very difficult. I don’t want them to just think Christianly, but to live Christianly. I believe that this attitude is crucial to a student’s ability to develop a lifelong love of learning, learning that is informed by faith.”

It took awhile, Walton said, for her own educational journey to embrace a love for learning and for that learning to be informed by faith.

That it ever came to be so is evidence, she said, of God’s irresistible grace and His cosmic sense of humor. Raised a Christian in Naperville, Ill., Walton’s faith in her early years was pretty hollow. Even as a high school student she went through the motions as a Christian, but faith hadn’t taken hold in any sort of life-changing fashion.

She wanted to get away after high school, so she decided to attend Colorado State with an eye toward being a veterinarian. But as a freshman she decided to try out for the CSU volleyball team, made the cut and soon found that the sport was a major impediment in terms of her studies.

“We’d often leave school in vans on a Wednesday for matches in New Mexico or Utah,” she recalled, “and get back to campus on Sunday, all of which made studying to be a vet pretty tough.” She decided to switch majors, and at one point she thought about dropping out of college to travel the country. A semesterlong program overseas in Wales (the country from which her ancestors hailed) got her back on track, interested in school again and passionate about exercise science.

After graduating from CSU she pursued her master’s in exercise science at Ball State University, which had one of the best programs in the country. She earned her doctoral degree in exercise physiology at the University of Maryland.

At Ball State, Walton met two people who would be a huge influence on her life. The first was Leroy “Bud” Getchell, who co-founded the university’s nationally recognized human performance lab and is considered, with Kenneth Cooper, to be one of the fathers of physical fitness in the U.S.

Of Getchell, who now lives in Holland, Michigan, Walton said simply: “Everything I learned about teaching I learned from him. I thrived under his mentorship.”

The other person she “met” was C.S. Lewis. “Someone recommended I read Lewis,” she said. “I don’t even know who anymore. They probably meant I should read The Lion, the Witch and the Wardrobe or something like that, but all the Ball State bookstore had was Mere Christianity. So that’s what I bought.”

That semester in the Ball State nature preserve, under a big oak tree she named Clive, Walton read Lewis. And Christianity became real to her in a way it never had before.

“I haven’t been the same since,” she said.

Those who have worked with her and who have been her students see Walton’s faith in action in her work as a Calvin kinesiology professor.

Brian Bolt, her department chair, calls her a gem, “a tremendous asset to her students, our department, Calvin College and her professional field.”

Of his colleague of 15 years he said: “Julie can flat out teach. Her courses are developed with care and precision to prepare our students in the best way possible. She thinks about teaching, talks about teaching, attends workshops to explore teaching and analyzes her own teaching performance on a regular basis.”

Zach Strong is a Calvin nursing major who also is doing a kinesiology minor with a concentration in nutrition and has had Walton for numerous classes. He describes Walton’s teaching style as both unique and applicable.

“She encouraged all her students to explore what it means to work hard and what exactly that is going to look like in our profession … Professor Walton has taught me that work carries over into every facet of your life.

“One of the most humbling things I will take away from Professor Walton is her idea of faith in the classroom. She taught us how to pray differently and with a new perspective. She genuinely cares about her students, and it has been a pleasure being part of her classes for the past three years.”

Elise Metzger Snapper graduated from Calvin in 2009 and then went on to Walton’s alma mater, Ball State, for a master’s in clinical exercise physiology. She wrote: “Dr. Walton provided me with the tools that enabled me to take a poster presentation to an American College of Sports Medicine conference. She also guided me to an internship in Chicago for exercise and rehabilitation for individuals with disabilities. This opportunity opened many doors for advanced education and a future career. I am very thankful for all the time and energy Dr. Walton put into helping me find my calling and be the person I am today.”

For her part Walton demurs. When she learned she was the 2014 recipient of Calvin’s highest teaching honor thanks to a personal visit from college president Michael Le Roy, she was first relieved, and then a different emotion replaced relief.

“You always wonder a little bit when the president calls and says he would like to stop by your office and talk,” she said with a wry smile. “I guess maybe as humans we always assume the worst. So when he told me why (he was there), I was a bit relieved. And then I was mortified. There’s so many people at Calvin deserving of this award. I kind of thought ‘Why me?’

“I never planned to be a teacher, and I’ve made plenty of mistakes as a teacher, but I guess I’ve learned a lot, too. I’m passionate about what I teach and students get that. I mean I just totally, totally believe that if you eat well and get your daily exercise we would not need half the health care we have in this country. When you eat well and exercise there are no bad side effects. So that passion drives me as a teacher. It’s a big part of why I do what I do.”

Walton also believes that Reformed faith and thinking frame the topics of exercise and health and nutrition in ways the secular world has long ignored or misunderstood.

“The fallen nature of our world, our thinking and our bodies creates a unique and important vantage point from which to begin to look at the whole world of food, embodiment, play, sport and aging as elements of creation God meant for good which we see perverted on a daily basis,” she said.

Discussing these topics at a Christian college, she adds, makes perfect sense.

“I don’t recall ever wanting to be a teacher or professor, but a writer and researcher,” she said. “I was quite happily pursuing that desire when God called me to Calvin College. It is here that we learn in community, here where we make the concerted effort to explore the meaning of grace. Most importantly, we encourage one another to view our lives as worthy of God’s calling.

Neil Carlson, director of the Center for Social Research, received the Student-Faculty Research Award; Roland Hoksbergen, professor of economics, received the Advising and Mentoring Award; Deanna van Dijk, professor of geography, took home the Innovative Teaching Award and Joel Navarro, professor of music, received the From Every Nation Award for Excellence in Teaching. 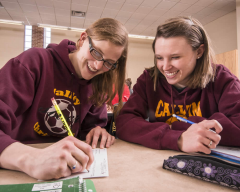 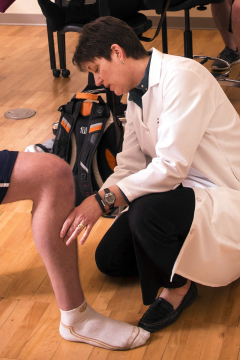 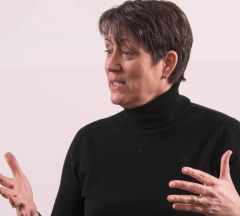