Dedicated to every student's success 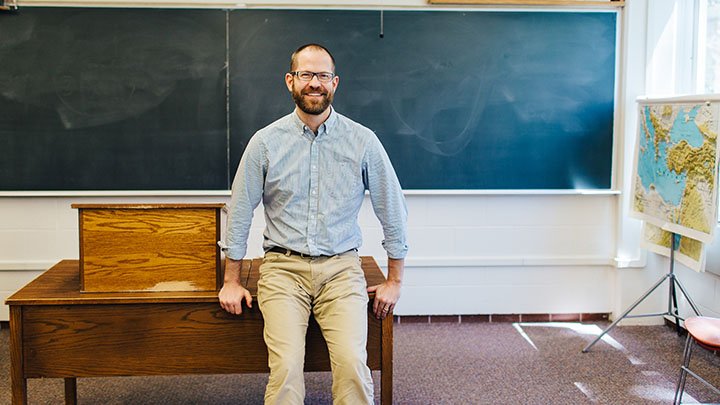 Established in 1993 the award includes both a one-of-a-kind medallion and a financial stipend from the George B. and Margaret K. Tinholt Endowment Fund, established at Calvin by a donor in honor of George Tinholt, a former member of the Calvin board of trustees.

The college presents the award annually as testimony to the fact that the heart of a Christian liberal arts college is the teaching by its faculty, who embody the goals of forming the Christian mind and shaping students’ lives. The award recognizes exemplary teachers and advances outstanding teaching at Calvin.

“Award recipients not only have exceptional teaching skills,” said Calvin provost Cheryl Brandsen, “but they also consistently influence the lives of Calvin College students in faithful Christian ways at Calvin, and beyond.”

For Lundberg, who came to Calvin in 2004, learning that he was the 2017 recipient of the prestigious award was a little disconcerting.

“There's a part of me that feels a bit sheepish about receiving it (the award),” Lundberg said, “because I am aware of how much excellent, compelling teaching takes place across this college every day, in the classroom, the lab, the gym. That was something that I experienced when I was a student at Calvin, though I think I may have taken it somewhat for granted at the time.”

Still Lundberg noted that he regards his time in the classroom to be the most important part, and usually the most rewarding part, of his job at Calvin. And, he added, he has learned a lot in the last decade at Calvin about what it really means to be a good teacher.

“I've learned so much about teaching from others at the college,” he said, “but most of all, I have learned about effective teaching from all of my colleagues in the religion department, especially those who were once my teachers.”

Lundberg, a 1997 Calvin grad who double majored in religion and Spanish, paid a special note of tribute to current colleagues and former professors Rick Plantinga and Tom Thompson.

“I took their Interim course my first year as a student at Calvin,” he recalled, “right as I was figuring out that physics was not for me. They introduced me to a host of big theological questions about life and death that I didn't know existed until that point. I got hooked on those questions, so I blame Tom and Rick for getting me into this business.”

Committed to his students

Lundberg's colleagues are equally effusive in their praise for him and his work, using such adjectives as exemplary, active and prolific. After observing him in the classroom, one colleague wrote about Lundberg's “relaxed manner of teaching” and his “excellent rapport with his students.” He continued: “They were very responsive to his teaching, as they asked and answered questions and made observations on the material.”

The selection criteria for the award include evidence of a long-term commitment to effective undergraduate teaching and demonstrated exceptional teaching skills which are evidenced in the testimony and lives of both current and former students.

Many remembered him as a wise discussion leader, a thoughtful theologian and a caring mentor.

Wrote one recent grad: “As part of the course, we had to discuss deeply many hot-button ethical questions of our day. From day one of our class, he framed our time together with a respectful, caring tone. He was a wonderful model for how to engage multiple perspectives, draw people’s ideas out and encourage thoughtful dialogue.”

And a current student wrote: “I have thoroughly enjoyed having Professor Lundberg as both an adviser and a teacher. I think he is very willing to work with his students and help their learning process in any way he can, especially those students with certain learning disabilities or struggles. I have only good things to say about him as a person and as a teacher. He has been my adviser since my freshmen year and I have always felt that if I had any questions about my major or core classes that I could ask him and he would be happy to help.”

Those words are especially meaningful to Lundberg who noted that one of his goals as a professor is to balance academic content and the unique people involved and also to always work to get the balance right between challenging and supporting students.

Another part of the criteria for the award is scholarly work and service to the college, the church, the profession or the community, and here too Lundberg excels. He has been a productive scholar who in recent years has served on academic panels, presented many papers at conferences, has been a referee for several articles in various scholarly journals and published numerous articles of his own, co-authored a book and is currently working on a monograph on the subject of martyrdom and violence and hopes to follow it with another one on martyrdom and ecumenism. He also served as co-leader recently of a study group on how theological convictions inform Christian work for justice on issues related to mass incarceration.

Calvin president Michael Le Roy noted that Lundberg once wrote of his teaching that "In the main, as I continue with my normal slate of courses, I will continue to look for small but meaningful changes that I can make to my courses and my pedagogy that will strengthen my teaching and my students’ learning."

“I love this approach to education,” Le Roy said. “Small but meaningful change. It's a great motto. And to what end? To strengthen our teaching and thus our students' learning. Matt’s commitment to excellent teaching at Calvin inspires us to excel in all facets of our mission at Calvin.”

“Sometimes teaching is frustrating,” he said, “but most of the time, it's tremendously satisfying. And I am deeply thankful to be part of this important work at Calvin.” 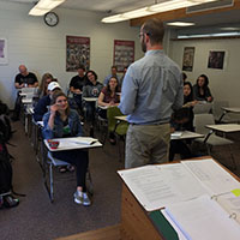 In addition to the Presidential Award for Exemplary Teaching, the provost's office gave out a number of other awards at the annual Faculty Awards Dinner, held Friday, May 5, 2017 at the Prince Conference Center.

From Every Nation Award for Excellence in Teaching
Eric Washington, history