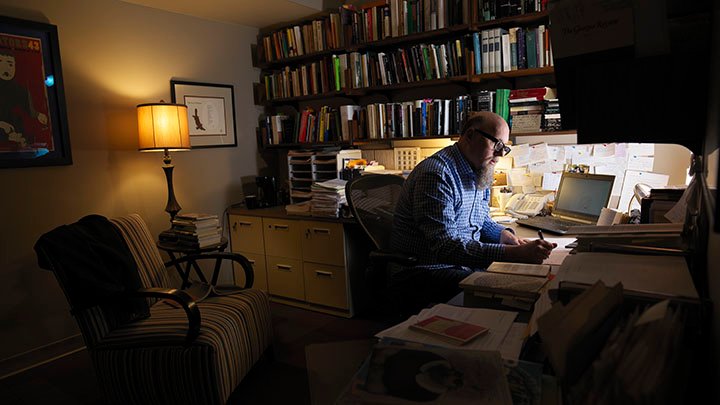 Lew Klatt is the recipient of the 2018 Presidential Award for Exemplary Teaching.

“That’s when the lights came on and I knew that I loved being in the presence of words.”

Calvin College English professor Lew Klatt’s love for language was brought to life in a college classroom by a writing professor.

A love of language

Klatt was interested in law at the time. “The reason I was considering that profession was because I enjoyed manipulating words in a persuasive way. It was really language that was my siren, seducing me.”

And it was the freedom to let his imagination roam and play, the opportunity to generate and probe existential questions, that turned him in a new direction.

“I became an English major after that first creative writing course I took,” said Klatt.

Now, it’s spring 2018, and Klatt’s imagination has been able to roam and play, inquire and probe, for 35-plus years. The impact of that freedom is hard to capture. But, with a Juniper Prize and Iowa Poetry Prize in hand, four poetry collections published, and the recent completion of a three-year term as the poet laureate for Grand Rapids, Michigan, it’s clear Klatt has earned the attention of his field and his city.

And now, his writing home for the past 13 years, Calvin College, is honoring his faithful engagement.

On Friday, May 4, 2018, Klatt received the college’s highest faculty honor, the Presidential Award for Exemplary Teaching. Established in 1993, the award includes both a one-of-a-kind medallion and a financial stipend from the George B. and Margaret K. Tinholt Endowment Fund. The fund was created by a donor in honor of George Tinholt, a former member of the Calvin College Board of Trustees.

The college presents the award annually as testimony to the fact that the heart of a Christian liberal arts college is the teaching by its faculty, who embody the goals of forming the Christian mind and shaping students’ lives. The award recognizes exemplary teachers and advances outstanding teaching at Calvin.

“Lew not only fervently practices his craft, he multiplies it—by teaching that craft to students on campus and beyond. Through him, they are learning the potential of writing as an art form and, specifically, the potency of poetry,” said Michael Le Roy, president of Calvin College.

“This is absolutely humbling, because there are a lot of unsung faithful teachers in this college, in this department,” said Klatt, of the recognition. “I also am gratified because, when like so many of your colleagues you do much of your work in the dark, early in the morning or late at night when nobody’s paying attention, it’s rewarding to learn that your efforts have yielded something positive. How wonderful.”

The yield of his word-sowing is plentiful: testified to by his former students. They see him as an effective teacher, thoughtful mentor, and compassionate voice; as an engaged, talented, and prolific poet.

“[Klatt] revolutionized how I write and think about poetry” wrote one student.

“He made me see the magic in them all [readings]—the various ways in which the authors had created a world, communicated a theme, or commentated on a culture. I never looked at the written word the same way after that class,” wrote one student.

Another student wrote: “I was taken aback by how invested he was in each student’s writing.”

“Every class session brought a new approach to learning, and I feel that my creative capacity grew,” wrote another student.

The testimonies of Klatt’s students are similar to the words he uses to describe his early role models who led him into a lifelong love of words.

“We need incarnate models—living practicing professionals in our field,” said Klatt. “I think their sense of awe and wonder was something that was contagious for me … My professors stoked the fire and they were so much farther down the road in their vocations that I really sensed there was something there, a lot there for me to go after.”

“He helps non-English majors to realize the value of language and literature outside the classroom,” wrote Chad Engbers, professor of English.

“His engagement with students is off the charts,” wrote Gary Schmidt, co-chair of the English department.

“Besides providing strategies and techniques for composing poems, I want to bring my students to a place of discovery of what words can do and give them potent examples of contemporary writers so that they can see what’s possible,” said Klatt. “The written word is an art form as much as it is a message delivery system. My hope is that they experience the energy of language and come to recognize that they’re a conduit for this linguistic vitality that’s part of culture-making.”

As he teaches literature, Klatt sees his best classroom work melding together his strong commitment to his faith, his craft, and his students:

“When I’m in the middle of a good, animated discussion and I’m taking the students through a series of questions that gets us deeper into the complexity of the text and when I know the material well, but I’m also suspending my knowledge and really listening to the students, paying attention to their insights, their observations, and finding a way to fold them into our class knowledge, I think in those kinds of discussions I’m at my best,” said Klatt. “I’m being playful, creative, improvisational, I’m adding to the knowledge, enriching it, but I’m also accompanying the students in their self-discovery and witnessing their appreciation for the power of language. In those providential moments of heightened conversation, we explore deep questions about faith, art, ethics, what it means to be human, all the things that a good piece of literature generates. If I can get that going and raise the intensity of the learning and encourage fellowship around a text … where students are actively engaged, they come out of it, I hope, more alive.”

Klatt sees himself as a lifelong learner, someone who is shaping and being shaped by words. And he’s grateful that through his teaching, his writing, and his work in the community, he’s able to cultivate in others a passion for imaginative literature.

“It would not be exaggerating to say that Lew’s public persona stands above the department like a giant billboard along the highway, a billboard that both celebrates Lew’s success as a master teacher, poet, and scholar even as it advertises the best qualities of Calvin College,” wrote Don Hettinga, professor of English. 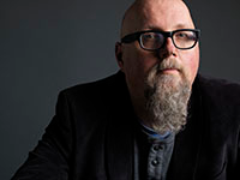 In addition to the Presidential Award for Exemplary Teaching, the provost’s office gave out a number of other awards at the annual Faculty Awards Dinner, held Friday, May 4, 2018, at the Prince Conference Center.