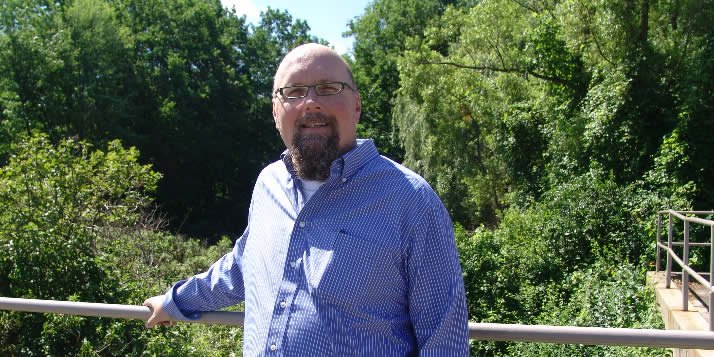 Lew Klatt was surprised with the Iowa Poetry Prize.

Lew Klatt thought that completing his latest poetry collection was the start of a long process: “Sending the book out, receiving several rejections, having it maybe become a finalist at some publishing house and then finding a home,” recited Klatt, a Calvin professor of English.

Instead his collection, Cloud of Ink, took a shorter route to its audience. The manuscript won the 2010 Iowa Poetry Prize and will be published by The University of Iowa Press.

"There’s no one way that a book becomes a book,” Klatt concluded. “I was really quite stunned that my manuscript, in its first iteration, had won the prize.”

The Iowa Poetry Prize, established in 1990, is bestowed on a poetry collection in its unpublished form every two years. Klatt is one of two recipients of the 2010 award. (The other is Julie Hanson.) “It’s fairly significant,” Klatt said of the honor, adding: “Any award is significant anymore because there are so many people competing.”

Cloud of Ink, whose title refers to the ink cloud squirted by an octopus, explores Klatt’s preoccupation with language as obfuscation:  “I’m interested in language as a smoke screen, in people hiding behind words,” he said. “I think religious people are particularly good at this. We have our own shibboleths and our ways that we let people know that we’re a member of the tribe. But shibboleths are no substitute for authenticity.”

Raised in Cincinnati, Ohio, the son of two teachers, Klatt enjoyed the wordplay that was intrinsic to his family life: “We always settled disputes at the dinner table by pulling out the dictionaries,” he said. Later on, a creative writing course changed his life. “I saw the power of language,” he said, “and how it could be used in a potent way and how it could make you feel intense emotions—how it could open up the imagination.”

Klatt earned a BA in English from Wittenberg University and a master’s of divinity from Gordon-Conwell Theological Seminary in 1991. He went on to earn a masters of arts in liberal arts from St. John's College in 1998 and a PhD in English from the University of Georgia.

He found inspiration for his work from an avante garde poetic tradition, the L-A-N-G-U-A-G-E poets: “They were interested in the texture of language, its sonic qualities, its textual qualities, the way letters can be re-arranged to create all these wonderfully new meanings,” he said.

Klatt has published poems in many journals, including the Columbia Poetry Review,the Notre Dame Review, the Boston Review, the Denver Quarterly, the Chicago Review, FIELD, the Cincinnati Review, jubilat, the Colorado Review, the Iowa Review, Eleven Eleven and Verse. His 2009 collection, Interloper, was honored with the Juniper Prize.

His colleagues are excited about Klatt’s recent honor. “The University of Iowa, perhaps especially its Writers' Workshop, has a great tradition of producing and supporting excellent writers and writing,” said English professor and department co-chair William Vande Kopple. “Any prize connected with the University of Iowa is a great honor indeed.”

Klatt first taught at Calvin from 2004 through 2006 and returned in 2007. “For a Christian College, Calvin has been on the forefront of engaging culture … ,” he said. “One of the wonderful things about Reformed theology, the Dutch expression of it, is the theme of all of life redeemed—that you can come to the kingdom with whatever skills and vocation you have. … I think it’s exciting to be a part of that project.”

Cloud of Ink celebrates the versatility of language and, at the same time, explores its limits, Klatt said. “Poets especially want to memorialize themselves with words, but none of it is permanent. They may be remembered by their own generation or even subsequent ones, but history is the ultimate eraser. The comfort for the Christian writer is to understand that her words have not been wasted; for a time and for a season, the poems entertain, provoke. Perhaps God himself enjoys them.”

From Cloud of Ink:

THE LILY ALWAYS HANGS ITS HEAD

The bud of the lily is closed. You

haven’t the foggiest idea why. You want it to soar when deployed.

You want a little zeppelin with propaganda.

To leave behind a paper trail.

The blossom engineered as if with goldbeater’s skin
seems close to inflated. Or,

caught up in the atmosphere, fly-by-night.

You look again at the stem. Upon which nods the head
of a Pelican!

And that is how you would leave it if addressed.

But there is always another version. Where the Pelican
sticks out its neck.