Discovering a deeper passion for poetry 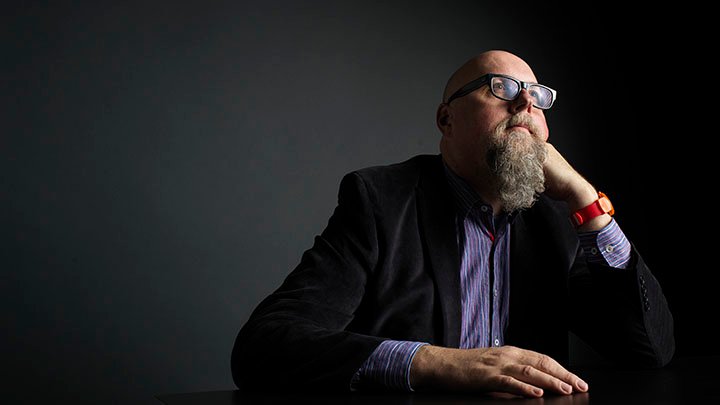 Calvin College professor of English Lew Klatt has served as poet laureate for Grand Rapids since 2014. In that position, he has served as an ambassador for poetry, creating programs in the greater metropolitan area that foster the writing and reading of poems. On Monday, April 24, 2017, the Grand Rapids community will gather at 6 p.m. at the Grand Rapids Public Library, in part, to thank Klatt for his service these past three years. As he transitions out of this role, Klatt reflects back on the highlights of his time as poet laureate.

What one initiative would you say had the greatest impact on the Grand Rapids community during your three years at the post?

In all my projects, I wanted to use the art of poetry to create synergies. Perhaps the program that was most effective in this regard was the GRAND POEMS IN RAPID TRANSIT project, which brought writing workshops to after-school programs, involved students in getting to know their local history, spurred participants to value public transportation by displaying their haiku on buses and bringing the kids to the downtown Central Station for the project’s dedication ceremony, and provided a public space for the literary arts. The project brought together groups that don’t typically work together—the Grand Rapids Historical Society, The Rapid bus system, the Grand Rapids Public Library. I felt especially gratified that, with the help of Tim Ellens and Vicki Seaburg and the designer Thomas Venhuizen, I could involve the Calvin community in something that would contribute to the flourishing of the city.

What project did you enjoy working on the most?

The MOTION POEMS Film Festival at the Wealthy Theatre last fall was a blast. Poetry can be intimidating; many of us feel frustrated by poems because they don’t behave like other forms of discourse. Yet we all love movies. What a great opportunity, then, to experience poetry through a medium we already recognize as both powerful and pleasurable. It was wonderful to see the interplay of the two arts and to have film critics, filmmakers, and poets from GVSU, Hope, and Calvin talking together in a panel discussion after the screening. There were many students in the audience who have their hands in both film and poetry and understand that the arts complement—rather than compete against—one another. That we were able to hold the event in a neighborhood theater was an added bonus.

What's one thing you learned during your time as poet laureate?

It’s not easy to mobilize and coordinate volunteers! But when you’re able to cast a vision and bring people together and harness their talents in working toward a common goal, that’s enormously satisfying.

How has serving in this role enriched your love for poetry?

Having to articulate what I love and why I love it to a sometimes unreceptive or indifferent audience, I couldn’t so easily dismiss the ways in which they have felt stymied, even betrayed, by poetry. My enthusiasm might work for those already entranced by the art, but not for the skeptical. The process of finding ways to help others appreciate what poems can do pushed me deeper into my personal affection for poetry and complicated my own understanding of it. I conceived the projects during my tenure as an imaginative, if also modest, means to solve the problem of poetry’s bad reputation and to generate (or renew) interest in the art. Along the way, I came up with a one-page “Rules of Thumb for Reading Poetry” document that is meant as a primer for those bewildered at how to approach a poem. Much of that document has to do with poetry’s pleasures. As poet laureate, I’ve also been interviewed often about poetry and its role in public life. I find that I love it all the more as I advocate for it. Learning to make public the things you privately hold most dear certainly exposes you and makes you feel vulnerable. But getting in touch with those passions and learning to share them reminds you why you’re alive and what you were put on this earth to do.

When you took on this role you said you were looking forward to helping kids develop a love for poetry. Is there a moment from these past few years when you saw a student's love for poetry take hold?

Aside from the haiku workshops, where so often our time together fiddling with language was pure play, I was struck at how proud the kids were when they saw their haiku “published” on posters that were of professional quality, thanks largely to Thomas Venhuizen and Vicki Seaburg, whose design work made for a stunning presentation. These kids had come with their parents and teachers to the downtown celebration at Central Station expecting perhaps a little fanfare but not a packed reception full of people abuzz, talking about their work. Their faces were radiant as they walked around the display and had their pictures taken in front of the posters. I’ll never forget the excitement of that afternoon.

What's one piece of advice you'd like to give to the next poet laureate?