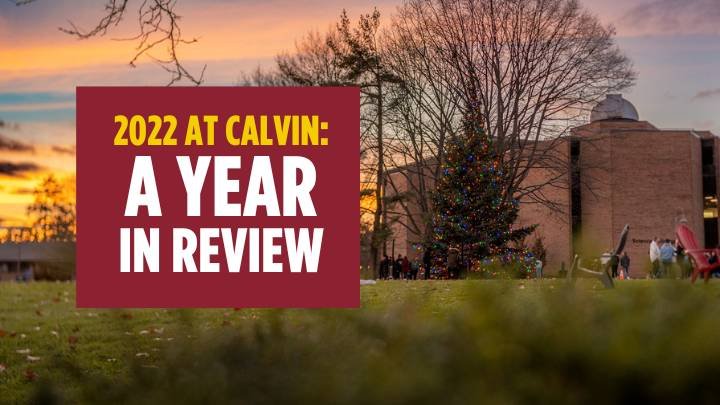 The 2022 calendar year at Calvin University included a presidential transition, new programming and new spaces, and milestone moments for the state of Michigan. Most importantly, it included many instances of the university leaning further into its mission of equipping students to think deeply, to act justly, and to live wholeheartedly as Christ’s agents of renewal in the world.

So, as 2022 draws to a close, News & Stories highlights a dozen ways Calvin has experienced momentum over the past year. Note: This list is representative and in no way exhaustive of all the great things happening at Calvin.

1. The Calvin Prison Initiative (CPI) had an historic year in 2022. In May, Calvin University awarded degrees to 76 inmates in a grand celebration in Ionia, Michigan. It marked the first time in the state of Michigan that bachelor’s degrees were awarded behind bars. In August, the undersecretary from the U.S. Department of Education paid a visit to CPI and determined what was happening there should be a national model for prison education.

3. In May, Joel Adams was selected to advise the U.S. Department of State as a part of the 2022-2023 class of Jefferson Science Fellows. Adams, who spent the past 30-plus years as a professor of computer science at Calvin, is among the first experts to be selected since the new Bureau of Cyberspace and Digital Policy was established in fall 2021.

4. In June, Adejoke Ayoola was appointed as the inaugural dean of the School of Health. An accomplished advisory board is leading alongside her. New partnerships, like the Pine Rest Academy, are already being established, and renovations to North Hall are now in progress to help increase student opportunities and client success.

6. In July, a residential master plan was made public that expands and invigorates living spaces around the Calvin University campus. The new plan provides a roadmap toward updating all residence halls, including adding connecting lounges on each residential floor, increasing accessibility through elevators, open-air staircases connecting lobbies, and residence hall basements, and updated kitchen and community spaces.

7. This fall, more than 1,000 incoming students began their pursuit of an undergraduate or graduate degree at Calvin. The entering class showed academic strength and was record-setting in terms of ethnic and geographic diversity.

8. In September, the School of Business officially opened its doors with a groundbreaking ceremony. The school also introduced new programming in 2022, including a new Operations and Supply Chain Management major. Students are also able to make their business ideas a reality with the launching of the entrepreneurial incubator, the Startup Garage.

9. In October, Calvin launched a Leadership Development program for underrepresented faculty and staff aimed at helping people of color on staff at Calvin to have greater opportunity to become leaders at the institution. Helping lead the effort is Rev. Dr. Michelle Loyd-Paige, who, in August, received the Dante Venegas Award, a prestigious honor given out by the Office of Race Relations recognizing distinguished leadership in diversity and racial justice in the Christian Reformed Church.

10. In October, more than 2,000 people gathered in Van Noord Arena and many more online to witness the inauguration of Dr. Wiebe Boer as Calvin’s 12th president and to formally welcome Wiebe, Joanna, and their family to Calvin. President Boer delivered an inaugural address titled: “The Greatest Generation is Now.”

11. In October, the board of trustees approved the university’s athletics strategic plan, which adds women’s acrobatics and tumbling, men’s volleyball, and men’s football to its portfolio of NCAA Division III athletic offerings. The plan also includes major upgrades to the university’s outdoor athletic facilities, which are already underway.

12. Calvin continued to demonstrate its commitment to sustainability. In July, Calvin became the first university in the state to pursue Solar-as-a-Service as an approach to accelerating the energy transition. This fall, two sections of an engineering class discovered a path for Calvin to eliminate its natural gas-related net CO2 emissions from its heating. And, in December, Calvin University was designated an arboretum—the entire campus, a rarity in higher ed.