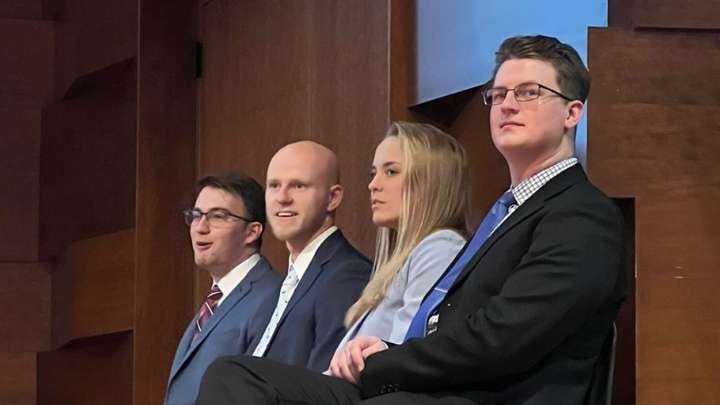 Sam Hoover (second from left) was one of four students in ENGR 333 who presented the team's findings on November 30, 2022.

It's early September and the first week of class for Engineering 333, and Professor Matt Heun poses this question: What would it take to eliminate Calvin’s natural gas-related net CO2 emissions from its heating?

“We were all just sitting there thinking, ‘oh my goodness this is going to be so much work. How are we going to get this done?’” remembers Sam Hoover, a senior mechanical engineering major.

To up the ante, there was a real client for this project, and he was seated in the back of the room: President Wiebe Boer.

Hoover was right. The project would be a heavy lift. It would require the 45 students between Heun’s two sections of the class to do a full analysis of all of the buildings on campus in order to discover the issues, uncover the inefficiencies, and work toward viable solutions. In total, the students invested approximately 1,800 hours over three months into the project.

But, in late November, Hoover stood on the Covenant Fine Arts Center’s Recital Hall stage with three of his student peers as they presented: “An Analysis of Calvin’s Heating System in the Pursuit of Carbon Neutrality.”

“The students went from knowing nothing [about this matter] to making a presentation,” said Heun. “One of the great joys of being a professor is bringing students along on the journey.”

With President Boer looking on in the front row and students, faculty, staff, and guests in the audience, the students presented an in-depth analysis of Calvin’s current state and its desired future state related to heating its buildings without carbon emissions.

The team presented strategies that would help Calvin move up the timeline significantly for achieving the President’s Climate Commitment that was signed in 2017, which stated Calvin would be carbon neutral by 2057. These included: reducing heating load through efficiency improvements, shifting the fuel source of heating systems from natural gas to electricity, and removing carbon emissions from electricity.

“It’s cool that the president of the university has taken the time to sit down, ask for our thoughts, ask for feedback, and given us an opportunity to use the skills we’ve developed to help better the university and help give options for the future,” said Hoover.

The team surely made discoveries related to the project and presented the university with options for the future. Those recommendations are included in the report. But what’s not included in writing, but perhaps far more important for the students, are the opportunities this project has presented.

Claire Sheppard, a senior mechanical engineering student who has a job lined up with GMB Architects in Grand Rapids, Michigan, says having two sections of the same class working together on one project, each with five specialized groups, taught her valuable lessons in collaboration and problem-solving.

“This project was very similar to what it will be like in the workforce, with each group having their own task,” said Sheppard. “Having two different sections, we had very different ideas of what should be done, so for the last week we were trying to come together for a presentation where you have two very different ideas, trying to combine those ideas led to many difficult conversations and trying to validate findings and make sure everyone is on the same page.”

Hoover, who has a job lined up with Constellation Energy in Cordova, Illinois, notes the development of his communication and math skills as a key takeaway from this project, along with the ability to put into action what he’s learned in the classroom.

“It’s helped us grow, practice the skills we’ve learned, really helped us prepare for the future,” said Hoover. “We’ve been able to practice how to be good Christian engineers, and we had this cool safety net with Professor Heun helping us along the way.”

While the project was clearly a win for the students, it so too was for the client.

“I was really impressed with the final public presentation from our Calvin University Engineering 333 students,” said President Boer. “I’ve worked in both McKinsey & Company and Boston Consulting Group and the process they followed and the solutions our students came up with was at the same level of rigor and excellence.”

“President Boer was very enthusiastic, very supportive of the students, and very complementary of the students and how far they got on this project,” said Heun. “But perhaps the biggest compliment to the quality of work of the students is that he asked me the other day ‘what are we going to do next year?’”