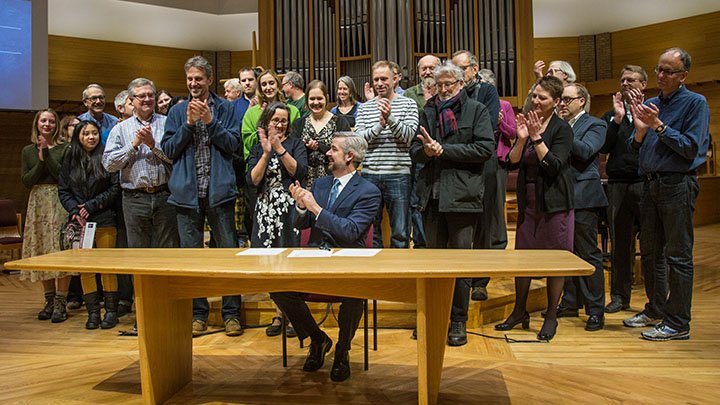 After signing the climate commitment, President Le Roy celebrates with faculty, staff and students who have been instrumental to sustainability efforts at the college.

“What this signifies is that as a community we are pledging over the next 40 years to take a systems approach to mitigating and adapting to a changing climate. Along with other aspects of sustainability, Calvin will address the climate challenge by reducing greenhouse gas emissions and by integrating resilience into curriculum, research, and campus operations,” said Le Roy. “We believe that this commitment is an act of faith that responds to what God reveals to us in our study of scripture and nature. In addition, we believe that it will enable us to serve students and deepen our contribution to a vital, ethical, and prosperous civil society.”

Le Roy’s decision to sign is informed by the work of the sustainability task force. In 2016, Calvin college vice presidents Sally VanderPloeg and Todd Hubers commissioned the nine-member, cross-divisional team to tackle an objective from the strategic plan that states “Calvin will complete a cost implementation analysis to inform a decision on whether Calvin becomes a signatory of the Second Nature Carbon Commitment.”

Their results convinced Le Roy that this was feasible.

“We teach our students to live out a love and fidelity to Jesus Christ, who gave his life so the whole of creation could be reconciled to God,” said Le Roy. “It is for this reason I have chosen to sign this declaration during the Calvin Environmental Assessment Program’s (CEAP) poster session. I’m excited to participate with our students as a co-creator in the mandate to “cultivate, keep, and name” this corner of creation that God has entrusted to us.”

The college’s commitment to creation care extends back more than three decades. In 1980, Earthkeeping: Christian Stewardship of Natural Resources, a groundbreaking book on creation care, was published by Calvin faculty. In 1985, the college put those words into action by establishing the Calvin College Ecosystem Preserve, which now expands to cover 100 acres of the 400-acre campus. The Bunker Interpretive Center which was built at the entrance to the preserve in 2004, became the first gold LEED-certified building in Grand Rapids.

In 1990, the student-led Environmental Stewardship Coalition was established; in 1997, CEAP was formed uniting faculty from diverse disciplines to direct student learning to better understand the campus environment.

In 2007, the board of trustees approved a Statement on Sustainability, which challenged the college to advance its commitment in its faithful application of biblical and theological principles in everything from curriculum to waste management. This foundational document continues to guide the college’s work today.

In 2009, the Plaster Creek Stewards (PCS), a collaboration of faculty, staff and students working with local schools, churches and community partners to restore the health and beauty to the area’s most contaminated waterway, was formed. To date, PCS has received nearly $3 million in grants for education, restoration and research efforts.

Around the same time, Calvin College began one of the first campus green revolving funds (Calvin Energy Recovery Fund), which to date has saved the college $200,000 and more than 2,100 MTCE (metric tons carbon equivalent) in emissions.

A complete timeline of creation care milestones at Calvin College is available at  www.calvin.edu/go/sustainability.

Today, Calvin College is recognized as a leader in environmental sustainability. In 2017, the college received a STARS Silver Rating for sustainability achievements from the Association for the Advancement of Sustainability in Higher Education. The college was also one of 227 institutions included on the Sierra Club’s list of Cool Schools, included in the Princeton Review’s Guide to Green College’s and named a Tree Campus USA by the Arbor Day Foundation.

“We desire to be faithful stewards of what God has entrusted to us,” said Le Roy. “We are doing that here at Calvin, and we will continue to provide leadership in this area in our community and in the world.” 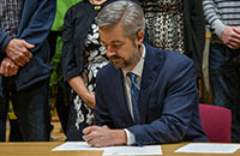