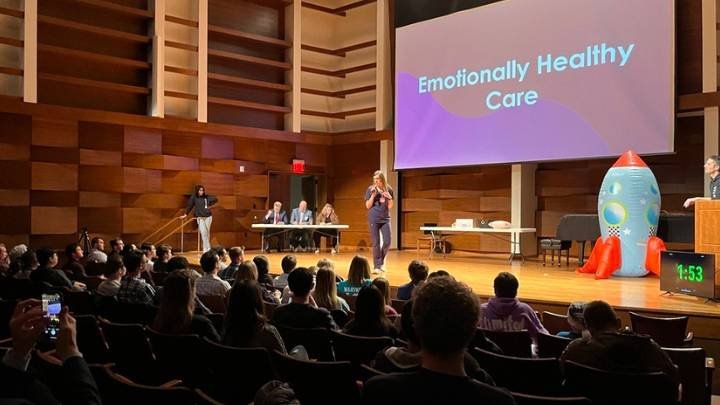 Wearing a robe, senior biology major Nathan Anderson stretched his arms wide, yawned, looked off into the distance and asked: “Do you struggle to get up for those 8 a.m. classes like I do?”

Dressed in nursing scrubs, senior nursing major Lauren Holwerda stated: “In Grand Rapids, hospital administrators are expecting 30% of their nursing staff to quit within the next 12 months due to burnout.”

Strolling across the stage with his two friends lounging behind him in lawn chairs looking at a TV screen setup on a stand, sophomore mechanical engineering major Sam Sands reflects: “A couple of weeks ago I went to go watch the first game of the World Cup and I had a problem because I couldn’t figure out where to stream it.”

On Monday night, standing in front of a recital hall filled with their peers, their professors, and some local businesspeople, a dozen students took two-minutes each to layout a real problem and then present a novel business idea that would help resolve it for their customer. It was the Calvin Startup Garage’s Fall PitchUp Competition.

“Public speaking and doing stuff like this terrifies me,” said Holwerda. “I signed up for it figuring it’s just two minutes, so the cost-benefit analysis was pretty good, and the reward was super high.”

The reward? $1,000 for the top idea, $800 for second, $400 for third, and $250 for fourth. The ideas were judged based on desirability (are there a good # of people who would use the product or service?); viability (will the idea generate money and be sustainable?); feasibility (does the technology exist to make this product or service feasible?), and presentation (did the speaker captivate the audience?).

The students presenting had four judges to impress: President Wiebe Boer, Associate Dean of Campus Involvement and Leadership JB Britton, Associate Athletic Director and Women’s Volleyball Coach Amber Warners, and the audience. Each would have an equal share of the final vote.

“Everyone can have a business idea, but not everyone has the courage to share it,” said Ashlynne Bailey, a sophomore majoring in marketing: professional selling who is the operations manager of Calvin Startup Garage, the entity that put on the competition. “I was really impressed with all the ideas presented tonight.”

So, too, were the judges. Though, they also offered helpful critique.

“It’s one thing to tell me, you should have showed me,” said Warners after one of the pitches.

“It’s a brilliant idea, but once again you’ve heard us say this, how are you going to make money?” wondered Boer about another pitch.

The night left participants with much to ponder, namely ways they could sharpen their ideas and presentations.

“Even if you’ve got a great idea, done the research, and presented it all well, some people still won’t like your product just because it doesn’t impact them on a regular basis,” said Peter Olson, a junior studying accounting and finance, after pitching a solution to the wear and tear on climbing shoes.

Aidan Bakker, a senior mechanical engineering major who pitched a drone-related concept, learned “how telling a story about your idea is one of the greatest ways to get other people on board with your idea.”

Anderson, who presented the Passive Aggressive Alarm Clock, was excited about his product, but said “I wasn’t as prepared as I could have been to rationalize why it was something people needed.”

Organizers hope the event helped build up resilience and confidence in those who presented and perhaps encouraged future pitchers.

Sands was in the audience for last year’s PitchUp competition. “I thought it was awesome, so I wanted to come up with something for this year. My friends and I had this problem, so I thought why not pitch it?” His idea this year, StreamIt, earned him second prize and $800.

Sands and Holwerda, who took home the evening’s top prize of $1,000 for her idea Emotionally Healthy Healthcare, have been honing their entrepreneurial skills as members of the Calvin StartUp Garage, which launched this fall with an entrepreneur-in-residence Jon VerLee.

The students participating in Startup Garage have weekly meetings with VerLee and interface with a team of Calvin alumni mentors who have started, run, and sold successful businesses.

“It’s beneficial to work with the entrepreneurial community at Calvin where regardless of how my pitch goes, they will be supportive,” said Holwerda. “If it’s a good business idea, the Startup Garage is a community of connectors and encouragers, and if the idea stinks, they’ll give you really good constructive criticism to either help you through it or improve your idea. It’s a win-win really.”

“So many students have amazing and creative business ideas, and we need to continue to provide resources, encouragement, and a safe space for their business ideas to flourish,” said Bailey.

President Boer has invested in dozens of business ideas in the past, and he left the PitchUp competition encouraged.

“As both an investor and a pitch competition judge for over a decade, I was very impressed with the quality and breadth of the ideas presented by the student entrepreneurs,” said Boer. “I’m excited that with support from the Calvin Startup Garage and the entrepreneurial ecosystem that our university offers, some of these ideas could be developed into solid, fast growing revenue generating businesses.”

“PitchUp is a great opportunity for students to dream about creating a future that does not yet exist. Some do that by pitching ideas, others do that by attending and cheering on their classmates,” said VerLee. “For everyone, it increases their creative mindset for what the future can look like.”