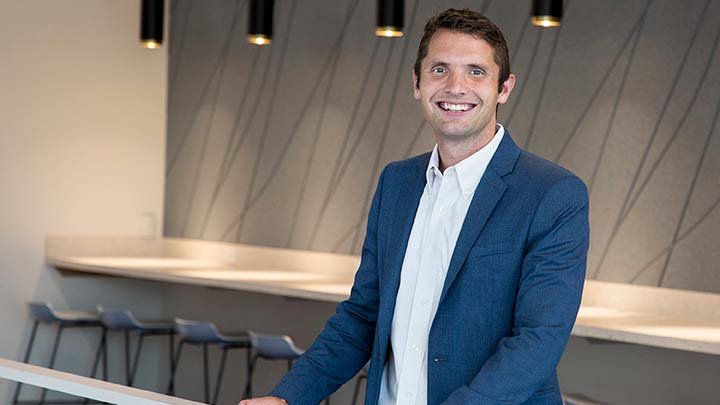 Jon VerLee is a 2008 alumnus of Calvin and the director and Entrepreneur-in-Residence for Calvin Startup Garage.

It’s 2014, Jon VerLee is seated across the table at Starbucks from Tom Betts.

VerLee is a 2008 Calvin grad, at the time a youth pastor at a large church in Grand Rapids. He was at a crossroads and needing “business” advice.

“I called Calvin, I didn’t graduate with anything that even rhymes with business,” said VerLee.

He was connected with Betts, a marketing professor at Calvin. An hour later, he recalls “I left with the single-handed best business advice I ever received.”

That advice led to a decision that changed VerLee’s life and now has the potential to have ripple effects for individuals and communities.

An Entrepreneur at Heart

VerLee has always had an entrepreneurial bend to him. In high school, he and a friend tried to start a web design company. When he started college at Calvin, he tried to blaze a new path. He majored in psychology, communication, and recreation in an attempt to “try to create a youth ministry degree at a university that didn’t have one.”

His time at Calvin connected him to internships and eventually a part-time, then full-time youth ministry role at Ada Bible Church, a large multi-site church in Grand Rapids, Michigan. While he enjoyed his work in the ministry, he saw an opportunity to serve the church more broadly.

Seeing and solving the problem

“A few years into my time at Ada [around 2010], the church switched from a legacy church management software platform to a more modern platform for a growing church,” recalls VerLee.

He remembers the switch not being smooth sailing. “I would sit at Tuesday morning staff meetings with the student team circled up and we’d recount weekend highs and lows,” said VerLee. “And week-after-week-after-week the topic of pain around database management was coming up.”

VerLee saw the problem, he knew the power of technology, and he deeply understood the church. His entrepreneurial mind was determined to dig in and find a solution.

“I thought if a church of this size is struggling to use software like this how on Earth does the much more typical church of 300-400 people on a weekend manage software and is there room to serve churches of that size with software tailor-built for them that’s easy to use with white glove support when they get stuck, because they aren’t able to afford a tech team at church.”

So, VerLee would spend nights and weekends developing a minimal viable product and then he started to meet with local pastors to answer the question: “is this a digital paper weight or actually something of value?”

Toward the end of the first year, a church said yes to what VerLee was offering: Breeze, a user-friendly church management software. Soon after dozens more began to sign on.

In Breeze’s second year, VerLee got a call from a company in Atlanta who was interested in acquiring the company. VerLee, who was still a youth pastor by day, was struck with the question: “Who am I? If I’m a youth pastor and this is a side project, this is a great deal. However, if I’m a business founder and this is a viable company, selling now is far too premature.”

Sitting across the table at Starbucks, Betts gave this advice: “I wouldn’t sell.”

Fast forward seven years later to 2021 and it’s obvious why VerLee calls that the “single-best” business advice he had ever received.

In those seven years, the company had expanded to serve 9,000 churches and was employing almost 50 people. VerLee sold in 2021 “for an amount I am still shocked by and blessed by.”

Investing in a Startup

After selling, VerLee and his wife Kerrie wanted to bless others with what they saw God had entrusted to them. VerLee circled back to Betts. That conversation evolved into the Calvin Startup Garage.

“The purpose is to create 100 Christ-centered companies in the next 10 years,” said VerLee.

VerLee is volunteering his time over the next four years to be the director of the Startup Garage and an Entrepreneur in Residence. The VerLees are also putting up $500,000 over that time to fund it, with part going toward operational expenses and part seeding an endowment that the university hopes to grow to $2 million with the help of Calvin alums and friends of the university. This endowment will allow the incubator to achieve long-term financial sustainability.

VerLee is investing in this way to make the maximum possible impact.

“The goal of a business is not to make money; money is a byproduct of creating real value in the world. That value is delivered both to customers through products as well as to employees through company culture and care. We leaned into that in caring for our team in significant ways for insurance and other benefits,” said Verlee about his former company Breeze. “I fell in love with business not only to change the world, but to create a place people love to work at.”

From that experience, VerLee learned not to think “how do I start another company that does this, but rather how do I create a system that creates companies that do this.”

“Startup Garage creates that opportunity for students from every discipline at Calvin to be equipped to create a business around a passion that they have,” said Jim Ludema, dean for the School of Business at Calvin University. “The idea is that students can start and grow businesses that deliver real value in the marketplace and also serve as agents of renewal in their communities.”

Ludema says the Startup Garage will equip emerging founders both within the Calvin ecosystem and beyond “with the skills and the financial resources to get companies off the ground by providing these entrepreneurs with funding, mentorship, and community.”

The students participating in Startup Garage will have weekly meetings with VerLee and will interface with a team of Calvin alumni mentors who have started, run, and sold successful businesses. The incubator will host Pitch-Up competitions and Shark Tanks where students can compete for seed funding for their businesses. Students will also have the opportunity to compete in other local and regional competitions.

After a few years, the Startup Garage aims to expand to not only equip Calvin students, but also support those in the West Michigan community who could benefit from interfacing with the entrepreneurial incubator.

Ludema is especially excited to see how the Startup Garage will help connect Calvin alumni business owners with their alma mater. “We are really excited to have Calvin alumni business leaders who have started and run businesses to come in as mentors, coaches, advisors, and guest speakers,” said Ludema. “We want the alumni community to be actively involved with Startup Garage and also to help build its endowment.”

And VerLee and Ludema, along with a team of faculty business leaders are driving forward with the Startup Garage because it aligns with the values of the School of Business and Calvin University as a whole.

“The culture changing impact that can happen when Christ is at the center of a business is tremendous,” said VerLee. “What I mean is these companies are redemptive forces in the world. The dial is turned to the opposite end … from exploiting people to finding creative ways to make the world as Christ intended it to be before the fall.”