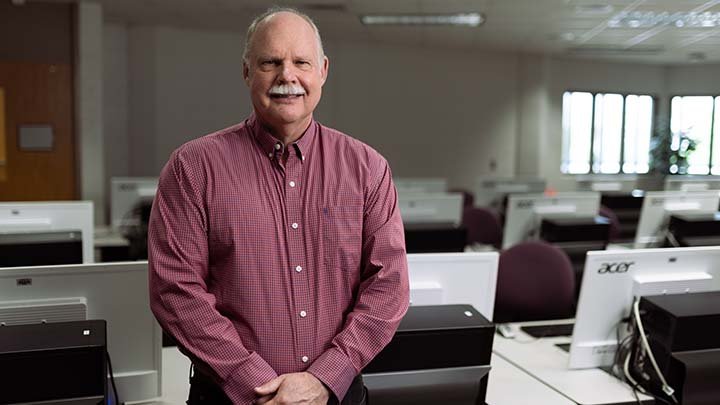 For 30-plus years, Joel Adams has been equipping and advising his students at Calvin University to be agents of renewal in their fields. Now, the professor of computer science is being asked to advise the Secretary of State.

“This is an opportunity to have input into U.S. Policy,” said Adams, “and if we take seriously this business of every square inch [matters to God], even the U.S. State Department ought to be included in that area. It’s all under Christ’s reign.”

Adams has been selected to be part of the 2022-2023 class of Jefferson Science Fellows (JSF), an initiative of the Office of the Science and Technology Adviser to the U.S. Secretary of State. While this is JSF’s 19th class of Fellows, Adams is among the first experts to be selected since the new Bureau of Cyberspace and Digital Policy was established in fall 2021.

According to the Department of State, this new bureau will address “the national security challenges, economic opportunities, and implications for U.S. values associated with cyberspace, digital technologies, and digital policy.”

Adams will serve in the Bureau of Intelligence and Research, Department of Cyber and Emerging Technologies. He will be an analyst, reading broadly and advising on emerging technologies.

“Whenever a question comes up from one of our diplomats about the implications of something, our group will write a two-page brief, circulate that among the intelligence community to make sure we are not off base, and then the final result of that will go to diplomats and can help form U.S. policy.”

While most Jefferson Science Fellows hail from large research universities, Adams sees his preparation at Calvin University, a smaller private institution in Grand Rapids, Mich., as second to none.

“Teaching at a place like Calvin, you teach a variety of courses. You need to be broadly prepared and trained across your discipline,” said Adams. “I’m not nearly as narrowly pigeon-holed like faculty members at bigger places may be. My experience at Calvin prepared me for learning whatever I’ll need to learn about the emerging technologies that will be of interest to the diplomats.”

At Calvin, Adams has both kept up with what he calls “the rapidly changing nature of technology,” and contributed to creating new knowledge in his field. At Calvin, he has operated and involved students in a robust research program supported by multiple National Science Foundation grants, written numerous research papers, and authored several well-received textbooks.

“You don’t get grants for doing things people have already done by-and-large,” said Adams. “You have to be doing new things, constantly learning, generating new knowledge, and discovering new things through the grant activity.”

While Adams is retiring from the faculty of Calvin University, he continues to see his former colleagues as trusted advisers to him in this new role.

“It’s quite possible questions will arise that my background hasn’t prepared me for,” said Adams. “If it’s something way outside my area of expertise, I’ll go to Calvin faculty to ask if they can steer me toward a resource or provide a resource.”

And not only will he lean on his former colleagues, but he will approach his work at the State Department in the same way he approached both his teaching and his research.

“I would hope that the reformed perspective would inform any work I would end up doing for the State Department,” said Adams. “Technology often seems to be created by idealists, people who don’t believe in human depravity. From a reformed background there are people who behave badly in this world. If we design technology, we need to do that in full awareness of that fact. We shouldn’t design the internet in a way that is so idealistic that it enables internet trolls, but that’s what happened. So, technology needs to have safeguards … Human depravity is a real thing. If God created the creation good, it’s all tainted by sin, and in a global context there will be people who use things to their bad capabilities.”

The State Department hopes people like Adams can help identify and address these emerging threats.

“By taking these steps, we will be better able to make sure that the United States remains the world’s innovation leader and standard setter,” said Antony Blinken, secretary of state.

Adams hopes to inspire more Calvin faculty to apply to become Jefferson Fellows in the future.

“Hopefully this kind of clears a path for other Calvin faculty,” said Adams. “I hope I’m the first of many.”

Adams is awaiting top security clearance but expects to begin his service to the State Department as early as this fall.