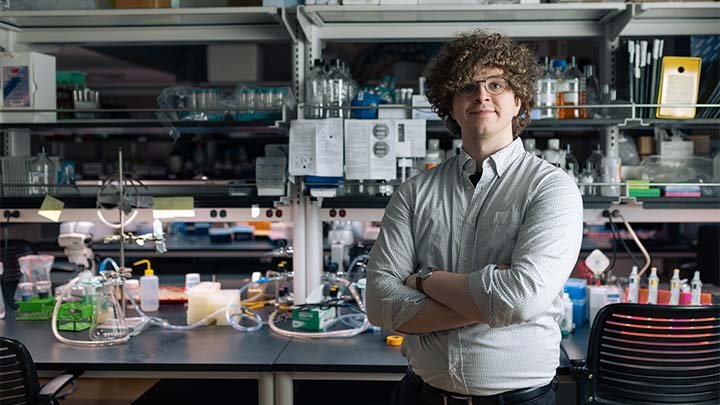 Fenton Lawler, who graduated last month from Calvin University, was recently named a Beckman Scholar. Typically, students in their sophomore or junior years receive this award, because of the requirement to study two summers beyond receiving it. However, in Lawler’s case, he has studied each summer during his four years at Calvin with his dedicated professor and mentor, Douglas Vander Griend.

In 2019, Calvin University was one of 13 higher education institutions to be awarded a Beckman Scholars Program. The prestigious and exclusive award is given out by the Arnold and Mabel Beckman Foundation, recognizing institutions that excel at providing undergraduate research opportunities for students.

Calvin also received the award in 2008 and 2014. The 2019 award provided Calvin with $104,000 to fund four students in carrying out specialized, long-term research in chemistry and biology over three years. Fenton Lawler is the fourth student from the 2019 program and the 12th Calvin student overall to be funded by this exclusive research program.

Lawler has maximized his experience during his undergraduate career at Calvin, wearing many hats in different research scenarios. One such instance was one Vander Griend was surprised by: pioneering a new design for a medical robot.

“[Fenton] has been the robot whisperer. He’s been the guy that's finally got this robot to do what we wanted it to do all this time,” said Vander Griend. “He disassembled it, and he rebuilt it. If we modified the configurations, he was familiar with everything—beginning to end—from the electronics to the servos to everything else. So yeah, he's really mastered that piece for us.”

Lawler offered his gratitude for the opportunity to learn more about chemistry and get some hands-on experience working in a lab.

Discerning his next path

Lawler will receive his two degrees in electrical engineering and biochemistry. His interests lie in neuroscientific studies, where he hopes to eventually learn more about differentiable neurodevelopmental disorders, like ADHD and autism.

He hopes to keep his future discipline broad, with his interests determining his career path. “I want to eventually get into that neuroscience PhD program. But what that is exactly, I don't know yet. It's kind of too early to tell. I might end up doing something a little bit more engineering focused,” said Lawler. “Or I may never touch engineering again for the rest of my life. We'll have to see.”