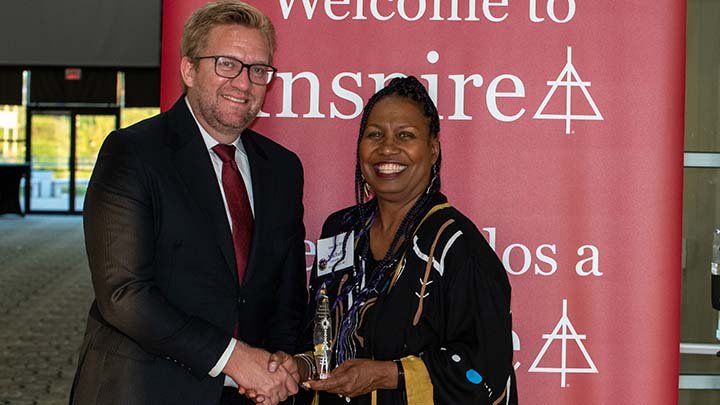 It’s late afternoon on Monday, July 11, and Michelle Loyd-Paige is checking her email.

On this day, when she opened her inbox, one email caught her off guard.

“WHAT? No way!” recalls Loyd-Paige of her reaction.

The email was notifying Rev. Dr. Michelle Loyd-Paige, the executive associate to the president for diversity and inclusion at Calvin University, that she was one of just two recipients of the Dante Venegas Award. The award is the Office of Race Relations’ method for calling out distinguished leadership in diversity and racial justice work in the Christian Reformed Church. Loyd-Paige is being recognized for her work in a community setting, while Sheila Holmes, a pastor from New Jersey and the other 2022 recipient of the award, is being honored in the area of pastoral and congregational work.

“I’m just doing my job day-in and day-out, so to be recognized with this award is mind- blowing,” said Loyd-Paige.

But Loyd-Paige’s faithful obedience day-in and day-out to her calling over the past several decades is no small matter. For 37 years, she’s served Calvin University as a professor and administrator, most recently for nearly a decade in a cabinet-level position created to advance the university’s commitment to diversity and inclusion.

This is significant, considering that LinkedIn research shows the average turnover rate for a chief diversity officer is just three years, with many leaving because of a lack of resources, unrealistic expectations, and inadequate support from senior executives.

“Calvin’s aspirational mission and my personal mission are in alignment,” said Loyd-Paige as a key reason why she’s stayed at Calvin for so long. She adds a felt obligation to continue in this work both to honor those who came before her and the generations that will call Calvin home in the future.

Viewed as a trusted guide

In 2015, Loyd-Paige received the Floyd Skinner Justice Award. In 2017, she was recognized as Calvin’s Woman of Achievement for the YWCA Grand Rapids Tribute Awards. And, in 2021, she was selected as one of the Office of Race Relations’ 10 Champions of Justice.

Loyd-Paige is a trusted guide on matters of diversity and inclusion, and she has offered her perspective generously to the church, the university, and to Christian organizations all over the country. She’s regularly contributed her voice to the Antioch Podcast, mentored other diversity professionals, and has developed resources to help organizations, including co-authoring Diversity Playbook: Recommendations and Guidance for Christian Organizations, which was released last year.

“I get calls at least twice a semester from leaders at other campuses or other organizations asking me ‘how do we do this?’ They say, ‘we really see what you are doing, and we want to be able to do something here,’” said Loyd-Paige.

While Loyd-Paige has provided much value in helping many organizations around the country strengthen their commitment to antiracism and diversity work, her faithful work over 37 years at Calvin University has been her primary focus.

And though at times her work has been challenging and exhausting, she’s found Calvin to be a place that is committed to continuous improvement in its diversity efforts.

Loyd-Paige has spent much of her time at Calvin helping the university’s faculty, staff, and leaders lean further into the institutional core value of diversity and inclusion. She shares a few illustrations where she’s seen firsthand the “fruit of her labor.”

“I was at a cabinet meeting, and something was being proposed to cabinet by an outside consultant and one of the other cabinet members said, ‘there’s not a lot of diversity reflected in that,’” recalls Loyd-Paige. “To see, without prompting, without coaching, without me having to say anything, someone else notice that what was being presented didn’t have much diversity reflected in it, and for them to say you need to bring that back to us with some diversity, that was a proud mama moment for me.

“During the pandemic when all the Cultural Competency and Professional Development (CCPD) training was virtual, 83% of faculty and staff had reported completing at least one CCPD activity. It was the first time we not only met our target, but beat it, and that was a proud moment for me.

“When the Global Campus rolled out their summer/fall course offerings this year, I looked and noticed half of them had significant diversity content included, even when the courses didn’t have to. That was a proud moment. When a commitment to diversity shows up in the work that people are doing because it matters to the institution and it matters to them, that’s a win.”

“There are few recognitions and awards that are more deserving. There are countless examples illustrating how the Calvin University community has leaned further into its commitment to diversity and inclusion because of Rev. Dr. Loyd-Paige’s faithful leadership in this area over many, many years. I wish she could stay longer. Believe me, I’ve asked her!” said Dr. Wiebe Boer, Calvin’s 12th president, a role he assumed earlier this summer. “What I do know is our focus as an institution to diversity and inclusion will grow stronger and be accelerated because of the foundation Rev. Dr. Loyd-Paige has laid for us. This is my personal commitment to honor her legacy.”

Loyd-Paige announced that the 2022-2023 academic year will be her final season at Calvin. She leaves confident in the future of the institution she served for the better part of four decades.

“When I’m talking with Dr. Boer, I hear the energy he has around diversity, equity, and inclusion,” said Loyd-Paige, who also served on the presidential search committee who recommended Boer. “He has a desire to see Calvin be more diverse, not just U.S. diverse, but globally diverse. Buckle your seatbelts, it’s going to be amazing.”

“Diversity work is not some passing trend. It’s not some woke agenda. We are commanded to love our neighbor as ourselves—that’s the second commandment. The first is loving God, and we can’t say we love God without loving our neighbors, loving our brothers and sisters,” said Loyd-Paige. “Jesus came to destroy the oppressive systems. He sat with the marginalized. He invited the marginalized into wholeness. As Christ followers, we should have this market on lockdown.”

Loyd-Paige received the Dante Venegas Award, which comes with an engraved crystal trophy, during Inspire 2022, an event designed specifically for ministry volunteers and leaders from Christian Reformed and Reformed churches across North America.