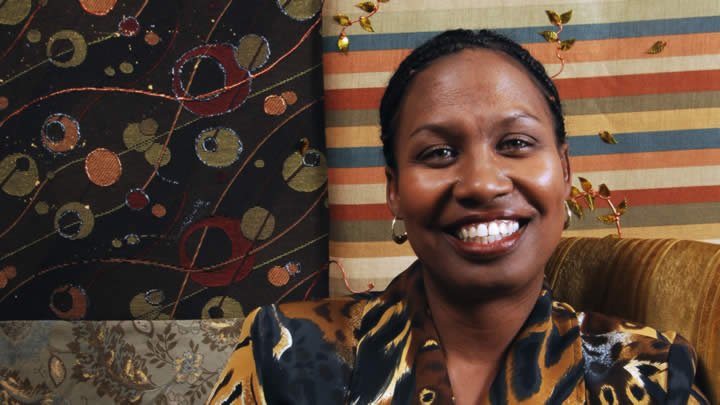 For 33 years, the “giants” of Grand Rapids have been gathering. These giants are categorized not by being tall in stature but by being strong in character and influence. And this year, one of Calvin’s own is being honored.

Calvin’s dean for multicultural affairs, alumna Michelle Loyd-Paige (who is currently serving as the interim executive associate to the president for diversity and inclusion), is the recipient of the Floyd B. Skinner Justice Award.

A program of the Woodrick Diversity Learning Center at Grand Rapids Community College, the annual Giants Awards and Banquet honors African American leaders “for their exceptional contributions shaping the history and quality of life of greater Grand Rapids.”

Of the suite of 13 Giants Awards, the Floyd B. Skinner Justice Award is reserved for candidates who “exemplify a concern for peace and genuine respect for people, fairness and equity.” As the award criteria notes, Skinner—a civil rights attorney—was an influential voice in promoting African American employment in Grand Rapids.

Loyd-Paige fits the bill both as a Giants Award winner and specifically as a Justice Award honoree.

As a cabinet member, she influences policy decisions that broaden inclusion efforts at the college. As a sociology professor, she inspires students through courses like Contextual Diversity Studies, Bridging the Racial Divide and Diversity and Inequality in North America.

“Michelle is a champion here at Calvin,” says vice president for advancement, Ken Erffmeyer. “A champion for education, a champion for faithful living and a champion for building a community where all can have a seat at the table.”

Loyd-Paige's local involvement has included work with the Women of Color Collaborative, the Angel Community Church Leadership Council and the Partners for a Racism Free Community Advisory Board. Through her extensive publication history and professional speaking appointments Loyd-Paige has shared her wisdom and experiences freely with others in the community and beyond, sparking important and ongoing conversations on topics including, but not limited to, African American leadership, reconciliation, health and faith.

Loyd-Paige says she was surprised by the award. “I would have thought it would be more likely that I would find gold in my backyard than to be recognized as a ‘giant,’” she says. “Not because I do not think that my work is important; it is very important work. However, the work that I do is often in the background, working through committees and having small conversations. Being recognized as a ‘giant’ leaves me speechless and encouraged to continue working as one of Christ's agents of renewal.”

With the award, Loyd-Paige joins the coveted company of past giant honorees, including former Calvin history professor Randal Jelks, who received the Hattie Beverly Education Award at the 2008 Giants Awards and Banquet.