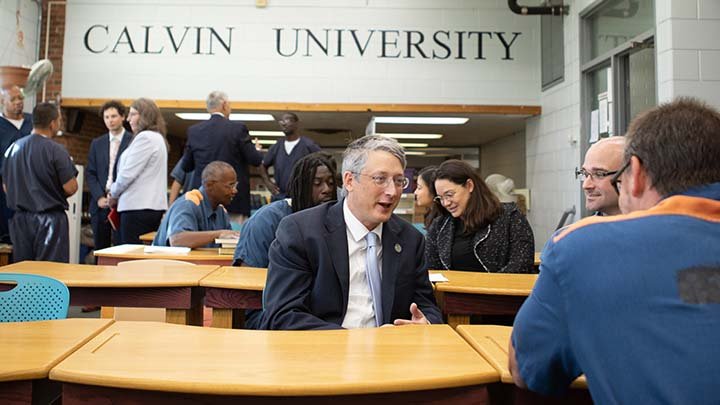 Undersecretary James Kvaal talks with a student and graduate from the Calvin Prison Initiative program during a visit.

“When we first walked into this room nearly a decade ago, the plants all hanging in here were dead,” said Cioffi. Pointing at the greenery in the room, “Now they’re alive and flourishing.”

Cioffi used this metaphorical picture to emphasize a bigger reality—one that his audience for this visit would understand more clearly as the day went on.

The guest list included leaders of the U.S. Department of Education, Michigan Department of Corrections, Calvin University, Calvin Theological Seminary, State Legislature, and the Council for Christian Colleges and Universities.

“We’ve never had all the players in the same room,” said Cioffi. “But they are all partners in this work.”

The newest visitors were from the U.S. Department of Education.

“This is the first prison I’ve stepped foot in,” said James Kvaal in a press conference following the morning visit. “We’ve done a number of listening sessions with incarcerated students, with people who operate these programs, and we’ve learned a lot from those conversations. But it’s a special opportunity for me to see up close how these programs work.”

As Kvaal and his team listened in at a 90-minute roundtable discussion in the newly built schoolhouse building on the property, he witnessed the power of partnership and collaboration.

“It started a class at a time and building trust on the front lines,” said Jul Medenblik, president of Calvin Theological Seminary, the institution who held the first class inside Handlon in 2012, which laid the foundation for the now flagship CPI program.

And trust surely needed to be built. Assistant deputy warden John Sutton, who has served 30 years in corrections, recalled what he told Cioffi early on: “This isn’t going to make a difference.” At the five facilities he had worked at previously, Sutton had seen many programs “come in with a bang and flutter out.”

But, one year into the program, his tune changed. “It’s getting better,” he recalls telling Cioffi.

Now, Sutton is singing its praises: “it’s a good program, best one I’ve ever seen. They stayed the course.”

So, too, has MDOC, under the leadership of Director Heidi Washington.

“This isn’t a fad or just a popular thing. We will invest everything to make these programs a success,” said Washington.

Washington sees the clear benefits to the students and her employees too. “None of this is possible without our staff at the facility. They have to want this as well. Little by little, seeing is believing. The way it changes the facility makes life better and safer inside,” said Washington. “We’re ALL IN here.”

So too are some state legislators, like senator Mark Huizenga.

“I’ve never seen any reform that’s changed the body of a prison [like this kind of educational program],” said Huizenga. “Not only are they changing a person’s life, but the longitudinal benefits are vast.”

Raymond Potts, a member of the first graduating class from the Calvin Prison Initiative who is serving a life sentence, helped illustrate some of those added benefits.

“My two daughters want to go to college now because they’ve seen me graduate, they’re calling on me to help them,” said Potts, holding back tears. “They saw the livestream of graduation and said ‘Dad, I can’t tell you how proud I am.’”

Equipped to lead, be fully human

“This program allows men to walk into purpose, possibilities, pragmatic considerations. We’re in this to change. When you’ve been part of the problem, you need to man up and be part of the solution,” said Potts.

Potts and fellow alums of CPI are doing just that. Potts is helping mentor students in the cognitively challenged housing unit and he is also a tutor and a teaching assistant in the CPI program.

“This is their home. They have the ability to change the culture here,” said Cioffi. “This program consists of 2/3rds lifers or those with long sentences, which is unusual. These are men who are going to be long-term leaders.”

“The numbers on ROI will be persuasive,” said Kvaal at the conclusion of the roundtable, “but I don’t think anyone can say it better than Raymond, to be able to give people an opportunity to be who they are meant to be.”

As the leaders strolled a few hundred yards from the red Schoolhouse Building, complete with a 100-year-old school bell, through the prison yard, their last sight before exiting was of two inmates tending a beautiful flourishing garden filled with dozens of varieties of flowers.

It's a beautiful picture of what’s growing inside the 20-foot-tall fences of Handlon.

“There’s cement and dirt at most places [like this],” said Sutton. “Ten years later, this is what you see [here]. Critical incidents are down, fights are down. It’s like a campground almost.”

A national model for prison education

The department leaders reflected on their morning at Handlon.

“It [This program] really has a strong sense of mission, and it really has touched people’s lives and changed their lives, and I think that is an incredible opportunity for these students,” said Kvaal.

“We are determined to continue to expand Pell [funding],” said Roberto Rodriguez, assistant secretary of the U.S. Department of Education’s Office of Planning, Evaluation, and Policy Development. “You can’t help but be struck by how exemplary this program is and in some ways the uniqueness of it.”

“Calvin, and the CPI program, is a leading exemplar of what high-quality prison education programs can be. We want to see more programs like this across the country,” said Amy Loyd, assistant secretary of the U.S. Department of Education’s Office of Career Technical and Adult Education. “This is the way to not just transform the lives of people who are incarcerated, but also their families, their children, their future generations, their communities. We really are talking about a ripple effect that extends far beyond the walls of this correctional facility and really transforms how people think about the role of education in human life, preserving human dignity, giving the men we met with today passion, power, purpose, potential, possibilities …”

“Now, with the visit today, we hope that this will be an opportunity to not only expand this in Michigan, but to expand this program across the United States for the benefit of those within,” said Wiebe Boer, president of Calvin University. “We look forward to further partnerships with the government to make this happen.”

The Calvin Prison Initiative has already sent two teams of graduates of their program to two prisons in Michigan to provide peer-to-peer support to programs that have recently started in those facilities through other colleges or universities.

“The goal of our program is being realized right now by getting teams together and getting them serving,” said Cioffi. “Seven-plus years in, the program has now actually started. We want a Calvin team in every prison in Michigan.”

“Keep an eye on this program,” said Potts. “It’s far-reaching. It will have broad dynamics.”