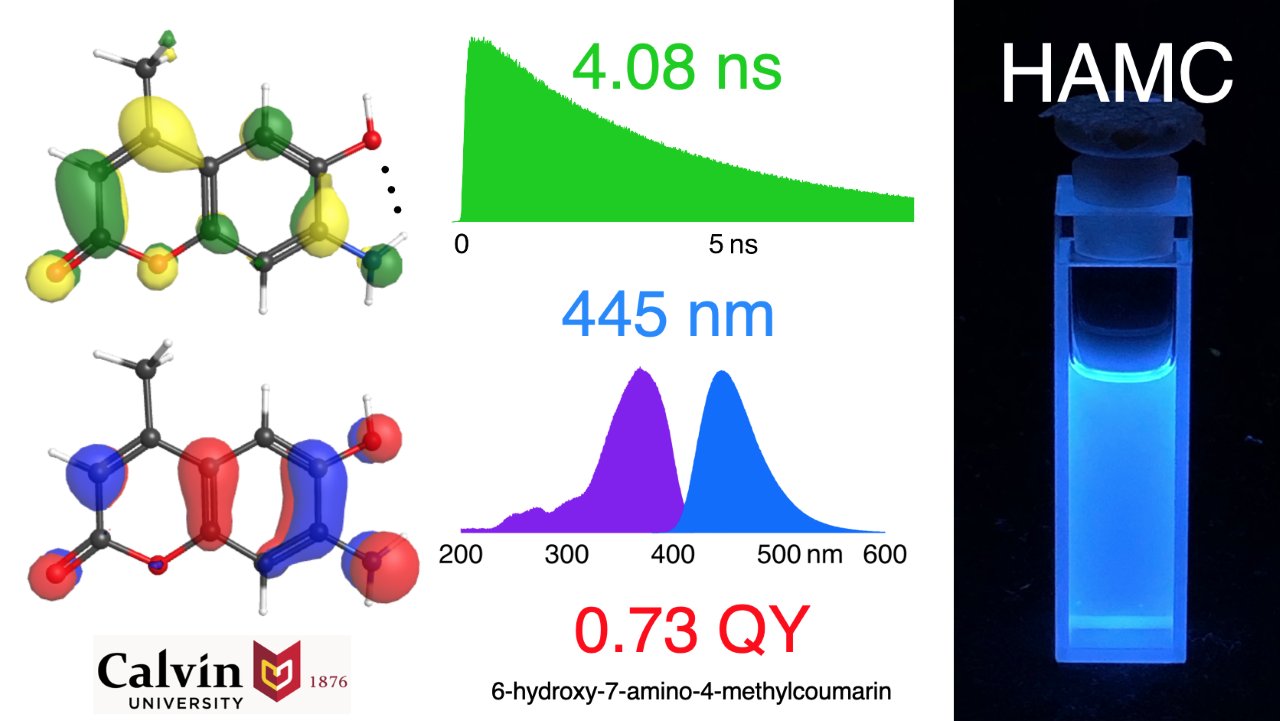 Last fall, Chemistry Professor Mark Muyskens and a group of students created a compound never seen before: a clear liquid that, when shown under UV light, glows a beautiful bright blue. Soon after discovering this coumarin from a series of syntheses, Professor Muyskens held a naming competition for the compound.

“It's not necessarily traditional that if you [just] make a new compound that you will name it,” explains Professor Muyskens. “There probably have been hundreds or maybe thousands of molecules that have been synthesized at Calvin that are brand new and they don’t all get named.”

After reviewing the names presented by students, the chemistry department settled on “Knightletin,” after Calvin’s mascot and for its chemical similarity to aesculetin, the compound they were studying.

Students Compose an Article for the Journal of Fluorescence

Before naming the compound, students Leah Knoor, George Du Laney, Isaac Jonker, Liam Hoogewerf, Yukun Tu, Hunter Pham, and Joy Yoo composed an article (Aesculetin Exhibits Strong Fluorescent Photoacid Character) explaining their processes leading up to the discovery. The article was then published in the Journal of Fluorescence as the first to explain the new compound.

Though not all students were in the lab at the time of the compound’s creation, they all certainly shared the same excitement as they realized what they had helped create.

“It was just such a great experience because it gave us a new perspective that none of us were expecting to get because we're not a lab that makes molecules, so we had absolutely no idea that this was going to happen,” senior Leah Knoor explains excitedly. “We got to study a completely new compound that nobody has ever heard of before, and then we got to write a paper about it. It was a great team experience.”

“The students who are working in my lab are learning about doing science, and so they are seeing something on the cutting edge of new molecules and new properties,” says Professor Muyskens. Not only are students able to experience firsthand the novelty of their discoveries, but they’re also playing a role in scientific history.

“The product of writing these papers and reporting the properties of these molecules is one aspect,” Professor Muyskens continues, “but the fact that these students are getting experience is another important outcome of doing the research. The students get that experience in science.”

Zoology-turned-biochemistry major Leah Knoor didn’t expect to find a new interest in chemical synthesis, but she’s excited to use her experience as she applies to grad schools. “This is a good illustration, especially in research, of how even when things don't go as you expect them to, they can still be really great successes,” she explains. “[Knightletin] wasn't necessarily a failure, but it was just an intermediate…we were going to throw it away if it wasn't a special molecule, but the fact that it was something brand new was surprising.”

At Calvin, students continue to foster their aspirations, which reveal to them truths about their vocations. Exciting, new insights always lie in wait for students to discover. We hope that as Calvin grows, students will continue to show their bravery, diving into the unknown and expanding their knowledge so that they may also grow.