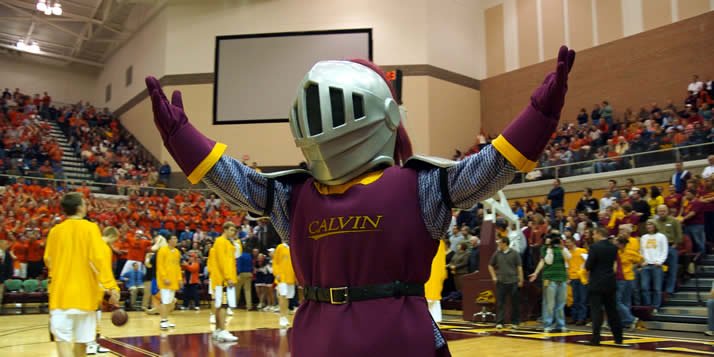 The European standard of the knight of the Middle Ages as an elite warrior sworn to uphold the values of faith, loyalty, courage and honor is the essence of any good school mascot;  picture Sir Lancelot or other Knights of the Round Table.

The legacy of the Calvin Knight dates back to 1926, but its inception actually has little to do with valor and bravery. In fact, it is presumed that the “Knight” nickname actually came about through the work of a Grand Rapids Press reporter who misunderstood “Calvin-ites”—a reference to the Calvin team used during the early 1920s due to the lack of any other moniker.

“Calvin Knights” stuck. Now, more than 80 years later, pride and a strong sense of tradition have grown around the nickname. Eight national championships have been won; 233 MIAA titles have been attained; 305 All-Americans have been named, all under the dubbing of Knight.

But always without a true mascot.

Rumblings among students and the administration about a mascot  have been around for some time. Then, in the early 2000s, student senate suggested that Calvin earnestly pursue the possibility of a mascot. The project gained some momentum early on but died off without student body support. About this time , “Cal” showed up, but as Cal was not a knight—more of a gladiator actually—and not strong in appearance (more like a cartoon character). He did not win the hearts of students nor the loyalty of fans.

In fact, a Calvin Facebook group started in the mid-2000s calling for a real mascot: “Join this group if you’d rather have a cool mascot, like a knight!”  The idea garnered some support among the 68-member Facebook group and beyond.

The senate  executive team worked closely with communications and marketing designer Gary Lepsch, designer of the new Knight logo, as well as college administrators, and the student life and health, physical education, recreation, dance and sport departments for input on the plan.

“We took a lot of things into consideration,” said Rispens. “In surveys we gathered that the students wanted a fierce knight—something with class that stood for Calvin’s values, not a goofy thing like some other schools. We wanted it strong but not too ominous. We also wanted a knight with the helmet on; no face, so that we could keep it gender neutral.”

Student backing was extremely important in the process, he added. “We had surveys that allowed students to choose things like the helmet type, tunic or no tunic,and the accessory: shield, sword or lance. Each design was then passed by a full student senate vote.”

The result is the new Knight to be unveiled at the Calvin-Hope men’s basketball game, held 7:30 p.m., Wed., Feb. 11 at the recently opened Van Noord Arena. The new Knight costume was produced by Street Characters Inc., the mascot design company for more than 30 professional and 100 college sports teams.

Everyone is a Knight

A revitalization of school spirit is among the goals student senate has for the new character. “The addition of the new arena gave us the opportunity to rethink the game day experience,” said Shirley Hoogstra, vice president of student life. “A mascot adds playfulness and an element of school spirit that we haven’t had before.”

The mascot also emphasizes the premise that “everybody is a Knight,” according to Norm Zylstra, coordinator of student and young alumni programs. “We’re hoping to take some of the emotion raised at sporting events and take it to other campus events like Dance Guild and Improv,” he said. “Having the mascot create excitement all around campus will help to underscore that we’re all Knights, not just the big, fast, strong people. Knights is not an athletic term; it includes everybody.”

Watch students vie for a chance to don the mantle of the Knight. 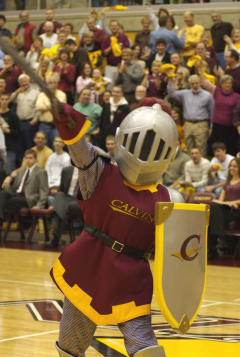