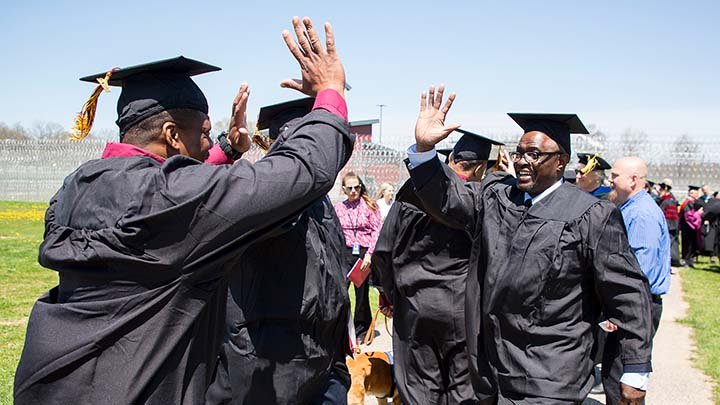 On Monday May 9, 2022, the first-ever bachelor's degree graduation ceremony was held behind bars in the state of Michigan.

Shouts of joy ring out inside a big white tent as one-by-one names are read.

76 men dressed in black caps and gowns make their way to the front of the tent. Some are donning maroon and gold honors cords; others wear medallions around their necks. The graduates walk one-by-one past faculty decorated in full academic regalia to receive their diploma and a handshake from Calvin University president Michael Le Roy.

For many of these men, the last time their family member heard their name read was at their sentencing, for some two or three decades ago. The emotions in that moment were likely disappointment, anger, sadness, shame, guilt, and regret.

But today, each graduate beams, smiling ear-to-ear. Their family and fellow grads shout, wave, and their tears are ones of joy.

The covered tent shields the view of 15-foot-tall barbed-wire fencing just steps outside. The gowns conceal the numbers that span the upper backs of the men’s blue uniforms.

But while these coverups are temporary, the transformation of the 76 men is not.

“Almost always we are called by our number or when we are in our [housing] unit, by our room number,” said Shawn England, a 2020 graduate. “So, to hear your name and to have your family hear your name in a positive light, that’s an exceptional gift for all of us—to have it publicly acknowledged that we’ve done something positive with our lives.”

The Commencement ceremony on Monday, May 9, 2022, at the Handlon Correctional Facility in Ionia, Michigan, marked the first time bachelor’s degrees were handed out behind bars in the state of Michigan. As Todd Cioffi, the director of the Calvin Prison Initiative, watched the prison yard lined with graduates in cap and gown anticipating their walk into the tent, he described the emotions he was feeling as “sheer joy.”

“This is the realized dream you all had,” said England as he stood in line talking to Cioffi.

“Here we are,” said Cioffi in amazement.

“To see that, it’s tremendous,” said Le Roy as he looked out at the lineup of graduates. “Crime diminishes, but education elevates. It’s an honor to be a part of the last seven years of elevating students here.”

Overcome by the moment

As the students entered the tent, the audio of pomp and circumstance was overpowered by continuous clapping from family and supporters and shouts of joy and celebration from the graduates. It was an unconventional entrance, but given the gravity of the moment, perhaps completely appropriate.

“Wow, what an entrance that was,” said Heidi Washington, the director of the Michigan Department of Corrections, as she began her remarks. “I hope you now believe you can do anything you set your mind to.”

Le Roy began his remarks with thanking the many who have made this program possible, getting choked up as he offered words to the faculty and staff of Calvin Theological Seminary and Calvin University.

“Before we did it [started the CPI program], we had discussions among the faculty about whether it could be done. And you are the evidence that those who believed it could be done were right,” said Le Roy looking at the faculty seated in the front row. “I want to thank you for demonstrating and living out this belief in the power of the gospel and the power of education, in that order, to change lives, to bring renewal, and to elevate the human person.”

“Thank you to the Calvin students, especially those who are graduating today, thank you for being diligent and curious, and hopeful, for being willing,” he paused holding back tears, “willing to imagine and work toward a different kind of future for yourselves. That’s just unbelievable, and it’s inspiring.”

Patrick Campbell offered the student remarks. He was paroled just two months ago, but joyfully chose to go back inside prison walls to be with his peers on this momentous day.

“Donors, policymakers, faculty, staff, MDOC administrators, look what together you have created. By giving, you have enriched the lives of others … by giving God is praised. God, thank you for giving us this opportunity,” said Campbell.

Campbell then went onto talk about how this program is different than other college programs inside prison.

“Other programs focus on information; CPI focuses on formation and transformation. So, what does formation and transformation look like?” asked Campbell. “Graduates growing vegetables for Kent County Meals on Wheels … training leader dogs for the blind … mentoring prisoners with developmental disabilities and mental health concerns … running worship services, substance abuse programs, facilitating discussion groups when professors couldn’t come in due to COVID, helping inmates at risk for suicide, and cleaning and working with MDOC staff to attempt to contain a viral pandemic despite the impossibility of the task.”

Called to live out the mission

Campbell then issued a challenge to his fellow graduates: “We have been given an incredible privilege with this education, and now it is our privilege to serve others with the gifts that we’ve been given … Serving as agents of renewal, we now seek to live our best lives, [we are] prime citizens awaiting our chance to help redeem every square inch of creation whether that is in the prison community or beyond the fence.”

The Commencement speakers then offered remarks. First, Jerline Riley, referred to as “Mother Jerline,” shared about the power of forgiveness and then gave an emotional plea.

“As I watch you young men, that gives me hope for mankind. If they counted you out and you making it, they counted me out and I’m making it, think of what the rest of the world could do if we could get all together. Let’s unify.”

And then, John Rottman, professor at Calvin Theological Seminary, who was a key person in the inception and development of the Calvin Prison Initiative, offered his remarks.

“CPI, in my view, has always been God’s idea and God’s work,” said Rottman. “I’m here today to thank God for all the people he roped into joining what he’s doing here at MTU. I could keep you here all day with stories of inmates whose lives have been transformed and professors especially who found new energy in participating in what God is doing here.”

But, instead after thanking many, he closed his remarks with the words of the psalmist, “you see the Lord has done this, and it is wonderful in our eyes.”

A charge of encouragement

To conclude, Jul Medenblik, president of Calvin Theological Seminary, offered a final charge of encouragement, asking the grads to place these words in their hearts and to carry them with them:

“Love you, you are made in the image of God.”

“Be safe … There will be temptations that come your way, but be wise.”

Following the ceremony, the grads recessed out to “Oh Happy Day” and enjoyed a light dessert reception just outside with their fellow grads, their families, faculty, donors, and supporters.

“Seven years ago, John Rottman, Dave Rylaarsdam, the director of MDOC, they said wouldn’t it be great if,” said England. “This is the culmination. Their dream has become a reality.”

And though the fencing, barbed-wire, armed security, and metal cell bars still exist, graduates like England can now dream themselves.

“Prison isn’t a place where dreams grow. Your dream is to get out,” said England. “[But] people in this program learn there are other dreams as well. Ultimately, you have to dream outside of yourself. I spent most of my life making the world a worse place, I now get to make it a better place.”