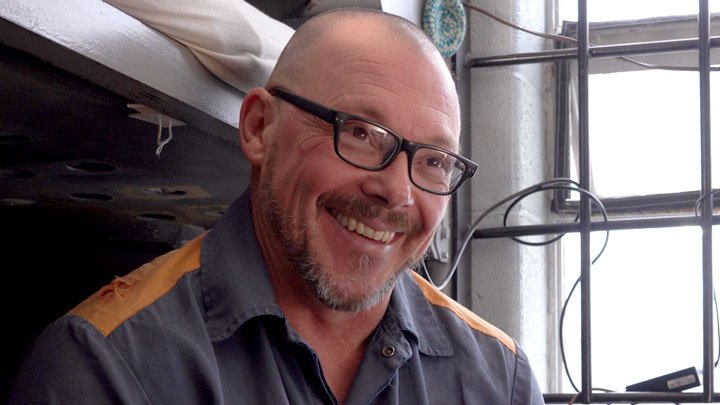 Thirty years ago Shawn England made a decision that would cost him his life.

Growing up in Fort Pierce, Florida, England was a self-described narcissist.

“I was the only one that mattered, I thought of everything in relation to myself,” recalls England.

England lived in a violent area, went to a violent school, had teenage parents, and they lived well below the poverty line. Add to that, England was in no way slow to become angry, and it was a recipe for impending destruction.

“There was nothing to intervene to allow me to escape that violent world that was my life,” said England. “It’s what I understood. I walked around on two legs, but I did nothing of worth.”

England’s only way out was a destructive path. In February 1991, England was sentenced to life without parole for first-degree murder.

“My life’s trajectory ended badly, and honestly at first when I came to prison, I didn’t care,” said England. “I reveled. You can mess with me if you want to, but I will kill you. It was a very dangerous place.”

His initial psych evaluation only “cemented in” England’s identity. His evaluation labeled him having above average intelligence and being narcissistic.

“That [evaluation] also informed later what I thought about myself. That’s who I am,” said England.

England would bounce around from prison-to-prison like most lifers. When he turned 21, he was sent to Jackson, which he dubbed “the big boy school.”

“There are no words to describe walking into 12 block at Jackson. The foyer is a dogleg and then it’s like being in the belly of a beast,” said England. He describes cages on both sides, and when he entered everyone was at their cage trying to figure out where the new guy was headed.

“Five minutes later, here comes the porter asking where you from, what you got, and how you answer quickly determines what happens. You learn very quickly,” said England. “Emotions are not your friend. You cultivate a stone face, a grim face that will serve you to a certain extent, but ultimately you have to pop someone in the mouth, that’s the reality of prison.”

It was about not showing weakness. It was a survival tactic. And England had developed this over the years.

“I’ve always cultivated anger,” said England. “Anger has always been my response to helplessness, to powerlessness.”

This default setting, as he described it, would be nurtured over the next two-plus decades. And so would his intellect. Before coming to prison, England was befriended by a small kindred of Odinists. At the time, he said it satisfied a need for something more. So, when he came to prison, he was an apologist for Odinism.

While he was defending Odinism, he was also playing offense. He was reading and studying the Bible, so that, he could prey on Christians. “I knew the Bible and I used it to try and break people’s faith, this blind faith, people who were parroting verses with no understanding of it,” said England.

A slight shift in focus

Then, England was transferred to Kinross Correctional Facility, and things started to change. He had been weightlifting for a long time in prison, but for the first time he took something he was good at and used it to benefit others as an over-40 fitness instructor.

“For a guy who has never thought outside of himself, this was a big change,” said England. “I also noticed that my religious beliefs had begun to change, though my behaviors largely had not.”

He was then moved to Lakeland Correctional Facility in Coldwater: a move that would change his life forever.

“A couple of days after I got there, a man walks up to me and holds out his hand and says ‘Hi, I’m Matt, how are you?” recalls England. “I was like … ‘o-k-a-y.’ Guys don’t do this to me. It’s grim most of the time, they look at me usually and think ‘this is not a friendly person.’”

But Matt took a chance.

“We started hanging out, and we would talk, he never proselytized, never did any of that, we just walked,” said England. “This guy had some serious setbacks in life, pretty famous in the MDOC (Michigan Department of Corrections) because of his case and what happened to him. He had a commutation, and had it yanked through no fault of his own.”

“I asked him how do you live like this (with joy) in light of all that’s happened to you?”

Old is gone, new has come

England, who had been persecuting Christ followers for years, underwent a Saul to Paul-like conversion.

“When you fully participate in the spirit and accept Christ, I’m now reading the Bible with the missing decoder ring—faith. No wonder I didn’t understand it before, I now had spectacles and suddenly I could see. I recognized right then that I had wasted my life. I had squandered the gifts God had given me.”

England continued to explore his relationship with God thanks to Matt’s mom who paid for him to take classes through Christian Leadership University. Not long after, a bigger opportunity came England’s way. An inmate he’d known for some time showed him a flyer for a new initiative being offered at Handlon Correctional Facility.

“I realized very early, partly revelation, partly Matt’s tutelage that God uses his servants and if I want to be God’s servant and use gifts God gave me, I needed to find a way to do that.”

So, England applied for the Calvin Prison Initiative (CPI), a partnership between Calvin University and Calvin Theological Seminary that provides a Christian liberal arts education to inmates at the Richard A. Handlon Correctional Facility in Ionia, Michigan.

“Coming on the heels of my surrender, I knew this was part of God’s will—I knew God wanted me to be a part of this program, to be a more well-trained servant. When God gives you much, you need to give much back. This is how I sought to do that.”

In June 2015, England was accepted into CPI, and in August 2015, he was transferred to Handlon to join the inaugural cohort in the new program that would offer inmates a chance to receive a bachelor’s degree in faith and community leadership. The environment he was entering was once dubbed Gladiator School. And England knew that education alone would not change the culture.

“We are aiming to create a moral community, and we use education to get there,” said Todd Cioffi, the director of CPI. “We are not just informing people; we are forming people to be in relationship to the Triune God and to one another.”

For England, he knew firsthand that is the only way to transformation.

“Without that, this program would not be worth having,” said England. “The Aristotelian idea of repetitive action forming virtue is not right. You cannot educate someone into morality, you use it as a tool to foster morality. They have to come to that in their own selves, only way to do that is for them to realize they are not alone.”

Through the CPI program, opportunities have opened for England.

He’s mentored and tutored his peers, been a teaching assistant, including designing and facilitating classes for non-CPI students who are going home with the goal of helping them internalize the need for a moral compass. He’s also led Bible studies and delivered sermons.

“Christ dug the well,” said England, “but Calvin is helping me deepen and shore up the well. A moral education is what’s necessary to shore that up.”

And it’s not just England who is changing. So too is the culture at Handlon.

“When you move into D unit—the unit where the CPI students live—it’s a completely different world (from the rest of the prison), it’s like being delivered into the Promised Land,” said England. You go in the unit in the morning from 6:15 to 8:00 and there’s nothing but Bible studies. In the open yard at night, 30 guys are out there having church. These guys are praying, reading scripture, delivering messages, we have the liturgy of the Word, we are out there every single night … We want to start a community that moves out and rethinks how they behave.”

England graduated with his bachelor’s degree in May 2020, and did so with excellence, earning a perfect 4.0 GPA. But it’s not what he points to as his greatest achievement.

“Some people get into this program to get out, they feel like this is going to be their ticket,” said England. “But a large percentage in this program get into it because they think they have a better chance of positively affecting people’s lives. That’s what I’ve tried to do through this program, what I’m trying to do now. My purpose isn’t to get out of prison, at least not physically, it is to live a more flourishing life.”

And to help others do the same—a far cry from what he had done most of his life.

“Since I stood on that yard on November 4, 2014 and prayed the Holy Spirit down, my life has never been the same,” said England. “It’s an internal change that has redefined who I am.”