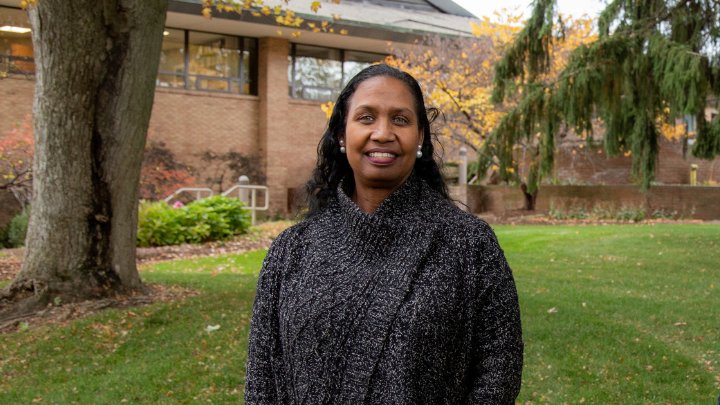 Michelle Loyd-Paige is the executive associate to the president for diversity and inclusion, a cabinet-level position created by former president Michael Le Roy.

“If we could have retained [more people of color] who have ever worked at Calvin we would have a more diverse workforce today,” said Michelle Loyd-Paige, executive associate to the president for diversity and inclusion.

Loyd-Paige says in recent years Calvin has not lost ground in compositional diversity. In fact, she notes that the university has maintained “if not slightly increased” its staff diversity year-over-year. She credits initiatives related to hiring that are part of the Strategic Diversity and Inclusion Action Plan as key to making progress in hiring.

But Loyd-Paige says the door into Calvin for people of color seems to have been a revolving one.

“It’s not the same people year to year. People leave, more people are hired. So, it’s almost like a revolving door,” said Loyd-Paige. “We are doing the hard work of recruiting people of color, so let’s be just as intentional about developing that candidate.”

Creating a pathway to leadership

Enter The Leadership Development Program for Under-Represented Calvin Staff (LDPU) that launches later this month. Like the improved hiring practices, this initiative is one of several stemming from Calvin’s Strategic Diversity and Inclusion Action Plan. It falls under the objective: “Increase the presence of international faculty and staff and those from historically underrepresented groups in leadership roles to approximate their proportion of the faculty and staff.”

The LDPU is a yearlong program administered by the executive associate to the president for diversity and inclusion in collaboration with the Office of Human Resources. It is designed for early to mid-career faculty and staff of color and intended to increase staff engagement and visibility, as well as increase confidence, knowledge, and skills appropriate for current roles and to seek promotions and other leadership opportunities at Calvin.

Through a cohort program involving reading, assessment, reflection, writing, mentorship, and guided conversation, participants will be supported and challenged as they grow their leadership capacity. Cohort groups will meet from October to March and have an opportunity to either attend a local gathering of the Global Leadership Summit or a Leadercast conference. Participants will also have individual mentors and will work with their mentors to develop their strategic career development plans as well.

“Most people of color leave Calvin because someone else has offered them a role, they are not seeing how they can fit in or advance here,” said Loyd-Paige. “This program aims to help people of color see themselves as a leader, not one day or someday, but right now to understand the places of influence they currently have and to prepare them to take on future leadership roles at Calvin if they so desire.”

Loyd-Paige is a diversity trailblazer at Calvin University and is esteemed within Christian higher education for the work she’s done over the past four decades. She has received national awards recognizing this work.

While she knows that there is much work to be done throughout all of higher education, including at Calvin University when it comes to retention of faculty and staff of color, she is encouraged by the progress Calvin has made and how leadership has embraced diversity and inclusion as a core value of the institution.

A commitment from leadership

“Under former president Michael Le Roy’s leadership, the work of diversity and inclusion became more institutionalized, and the awareness became a higher priority,” said Loyd-Paige. “And when I’m talking with President Wiebe Boer, I hear the energy he has around diversity, equity, and inclusion. He has a desire to be more diverse, not just U.S. diverse, but globally diverse. Buckle your seatbelts, it’s going to be amazing.”

“What I do know is our focus as an institution to diversity and inclusion will grow stronger and be accelerated because of the foundation Rev. Dr. Loyd-Paige has laid for us,” said Wiebe Boer, president of Calvin University. “This is my personal commitment to honor her legacy.”

“People will go and stay where they are known, not invisible, where the organization says we want to invest in you,” said Loyd-Paige.

The LDPU is a step in that direction and the inaugural cohort of ten staff members has their first meeting on Monday, October 24.