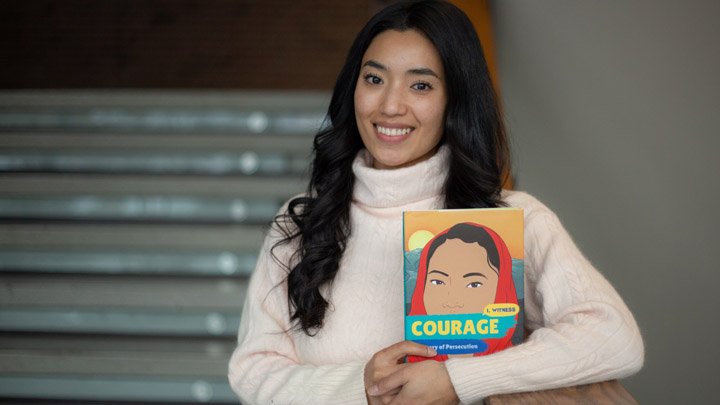 “If you want to make the world a place where justice and freedom are more valued than racism, persecution, and oppression, it’s up to you,” wrote Freshta Tori Jan. “You have to take hard risks, and it won’t be an easy journey.”

Tori Jan knows this from experience.

On January 11, 2022, her book, Courage: My Story of Persecution, will be published. In it, Tori Jan, a senior pre-law student studying international relations, shares her journey fleeing the Taliban in Afghanistan, relentlessly pursuing education against all odds, and learning the power of her own voice.

Tori Jan and her family are Hazara, a minority ethnic group that has faced a devastating amount of persecution and prejudice. In the fourth grade, Tori Jan witnessed Hazara communities get attacked and killed one after another—and yet no one did anything about it.

However, she witnessed her father’s courage amidst these great trials. He was kidnapped by the Taliban three times, barely surviving the last encounter which left him paralyzed and unable to provide financially for his family. Despite this, his stories gave Tori Jan the strength to follow in his stead and be courageous.

“I saw that my father had been brave and selfless. He was pure courage,” wrote Tori Jan. “His stories instilled in me the importance of being a fighter, a risk-taker. His experiences gave me wings of courage.”

After a series of terrible death threats and Taliban attacks, Tori Jan and her family knew it was time to flee the country. When she got accepted into a high school in Texas, her mom encouraged her to go even though she was the family’s sole provider at that time.

“I remember my mom said that she would lay down her life for me so I could go change the world, to change our community, and our country,” said Tori Jan. “It was incredibly difficult, but I really wanted to step up and actually do something. I wanted to continue my dad and my mom’s legacy.”

Once in the United States, Tori Jan was torn between her new experiences and her past back home. She began to be invited to speak locally at different events, where she learned how to use her voice to advocate for the people suffering in her country. She soon began to also speak around the country talking about gender rights, the importance of breaking stereotypes, and the Hazara genocide.

“People need to realize that their voice and their thoughts are one of the most important places to start,” said Tori Jan. “Your voice can carry so much power. By even telling a family member about an issue, you can start a chain of awareness in your community.”

Never Too Young to Be a Leader

Courage: My Story of Persecution is the third book in the I, Witness series by W.W. Norton & Company which shares first-person narrative stories of contemporary young people who have faced terrible challenges in their lives. The series is aimed at readers 9–12-years-old, and Tori Jan wants young people to know that they are not too young to become leaders.

“You can be a kid and still able to be a leader in the world. You can start by speaking against those wrongdoings that you see,” said Tori Jan.

She advocates that difficult social and political concepts need to be taught to kids even at a young age.

“Those generations are the ones that we will be depending on going forward, and it’ll be in their hands how we fight for justice,” she said. “Stopping wars, stopping genocide, stopping political warfare. If we’re not setting them up from the time they are kids, then when really is the right time to do that?”

As a young person in Afghanistan, Tori Jan was often limited in her access to knowledge outside of her textbooks, requiring her to sometimes reach out to elders in order to learn about the world around her. Her current international relations classes also continued to shed light on the complexities of global, social, and political issues. For example, in one class, she remembers learning about the Rwandan genocide

“The more I learned about it, the more I was like, ‘this is literally what’s happening with my ethnic group, and no one is talking about it,’” said Tori Jan. “It made me righteously angry.”

With a new book out and one more semester at Calvin until graduation, Tori Jan is not slowing down. With the influx of Afghan refugees in the United States, she has been able to fill a vital role of advising and educating Americans who are providing aid, assisting refugees herself, and supporting her family who have newly landed in Grand Rapids, Michigan. She also founded the Hazara Advocates USA group in hopes of spreading awareness of her people’s struggles and is applying to law school to focus on international law.

Tori Jan hesitantly admits that she has a lot on her plate.

“It’s a lot, but it’s very fulfilling work that’s been a big part of my vocation. I’m just so grateful to be able to have a platform to serve in that way.”