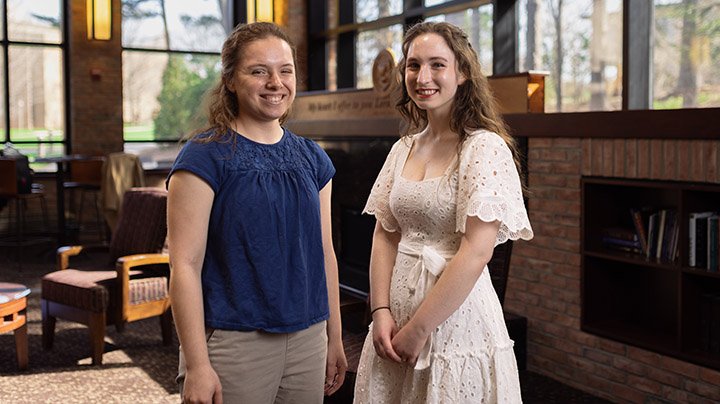 “My Calvin education has challenged me to think critically and take risks,” said graduating senior Michelle Merritt. “I am not sure that the person I was at 18 would have chosen to move to Mongolia, and in a different environment I might not have gained that kind of confidence.”

For Merritt and recent graduate, Sarah Gibes, their paths after graduation look a little different than what they were first expecting when they entered Calvin.

Merritt, a 2022 graduate with double majors in linguistics and Chinese, received a highly competitive Fulbright English Teaching Assistantship grant. The Fulbright Program is the flagship international education exchange program sponsored by the U.S. government. Merritt will be teaching English to university students in Ulaanbataar, Mongolia in 2023.

Gibes, a biochemistry, English, and German major, received a United States Teaching Assistantship of the Austrian Federal Ministry of Education, Science, and Research. This program, administered by the Austrian government and Fulbright Austria since 1962, aims to increase understanding between Austria and the United States. Gibes will serve as an English class teaching assistant for two high schools in Salzburg, Austria during the 2022-2023 school year.

Recipients of Fulbright grants are selected on the basis of academic or professional achievement, as well as demonstrated leadership potential in their fields. In addition to English Teaching Awards, Fulbright also offers awards to pursue graduate study or to conduct research with advisers at foreign universities.

Professor Dwight TenHuisen, Calvin’s Fulbright Program advisor for student awards, notes that “the awards are very competitive so you can never know whether a student will be selected for an award or not. It’s always disappointing when such strong students are unsuccessful in their bid to receive a Fulbright.” He states that in Merritt’s case, however, the campus committee and he had great hopes because “she had a very impressive application, demonstrating not only how well equipped she was for the task but also how the experience will be an important part of her professional development.”

“It is a joy to work with students as they prepare their applications. In the process, I get to learn not only about their academic experiences at Calvin but also about their life goals,” said TenHuisen.

Calvin Mentorship Made a Difference

Merritt came into Calvin with the desire to study linguistics and Asian studies. Knowing that Calvin offered two years of Korean classes, Merritt decided on a whim to learn a little Chinese as well. That quickly became her second major.

“I am fascinated by the social functions of language—how to learn it, how it shapes communication, the ramifications of speaking certain languages fluently but not others,” said Merritt. “Teaching ESL/EFL at the university level is one of my key interests, and so having the chance to develop that skill right out of university is a rare, perfectly suited opportunity. At the same time, I will be broadening my own language skills through immersion.”

“During the two years Michelle studied Chinese with me at Calvin, I found her to be not only brilliant, but also incredibly industrious and insightful,” said Herzberg. “Her well-deserved Fulbright in Mongolia will give her the opportunity to learn yet another language and culture to further expand her knowledge of world languages and cultures. What Michelle will offer her university students there is a vibrant and caring teacher who will enhance their knowledge of the world, just as they will do the same for her.”

Merritt credits the support of her professors in helping her get to the point of being a strong candidate for Fulbright.

“I have had an astonishing number of Calvin professors invest in me personally and professionally, said Merritt. “I do think that many of the qualities which make me a strong candidate for Fulbright have been instilled or developed by Calvin. The mentorship of Calvin faculty has been integral to my own scholarship. In addition, the smaller environment that Calvin provides allows for abundant leadership potential; I am not sure I would have had so much autonomy in my research work or as a student organization leader at another institution.”

The Importance of Public Service

Gibes came into Calvin with an open mind about what she wanted to study. After switching majors seven times, she landed on biochemistry, English, and German with a pre-med focus.

“It’s been an eclectic academic experience, to say the least,” said Gibes. “Calvin has allowed me to pursue a diverse range of activities. From completing a German major to editing for Chimes to tutoring and working as a TA for the biology and chemistry departments, Calvin has provided an array of opportunities.”

These opportunities included taking a pre-health interim course in Nepal in 2020 with Professor Kumar Sinniah, of the chemistry and biochemistry department, in which they explored medical practices in low-resource, mission-focused healthcare settings.

“Sarah will be a fantastic ambassador for the Fulbright-Austrian program,” said Sinniah. “Sarah was not only able to think deeply, but she was also able to grasp the bigger questions and elicit thoughtful discussions among the group of students who participated in the course. Her essay on the inequalities that she observed in Nepal and her own privilege was an honest, and thoughtful reflection. She brings a wide range of experiences into this position, and her students will be absolutely delighted with her.”

Gibes is excited for the opportunity to invest into the Austrian community that she’ll be a part of.

“I believe that public service is important, and that investing in young people is a particularly important form of public service. This grant allows me to pursue both of those things,” said Gibes. “I’m looking forward to working in an international context, learning about the Austrian secondary and post-secondary education systems, and building long-lasting connections with the Austrian people.”

During her time teaching English in high schools, Gibes also plans to enroll at the University of Salzburg and work on courses in medical and molecular biology.

“I hope my experience can encourage other students to step outside the box,” said Gibes. “There is so much to learn about the world. Pre-professional studies or anxieties about graduate school resume building should never prevent anyone from taking on the challenge of living in a different country, culture, or language.”