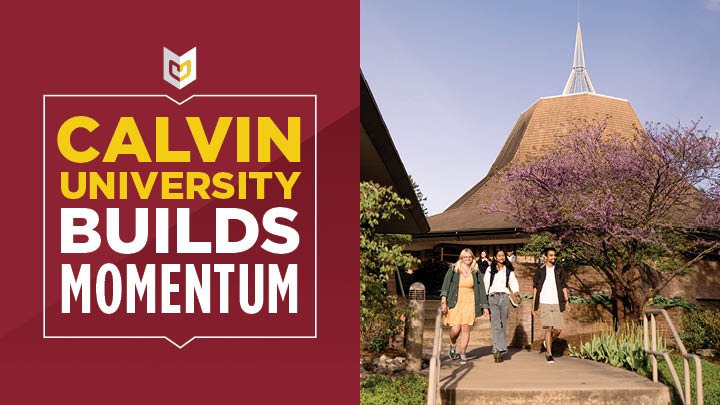 Since Calvin, which was established in 1876, changed its last name from “college” to “university” on July 10, 2019, a lot has happened. The name change, though the most visible, was part of a much larger vision. In short, that vision’s goal is to make the mission of Calvin more accessible to a greater diversity of learners worldwide, to develop as a trusted partner, and to deepen and strengthen the institution’s commitment to the Reformed Christian faith.

In just 36 months, Calvin has experienced a lot of momentum in moving toward this vision. Here’s the short list:

2. Established the School of Business thanks to a record-setting $22.25 million gift, selected its inaugural dean Jim Ludema, and completed the state-of-the-art building for fall 2022 classes.

3. Appointed Dr. Adejoke Ayoola as the inaugural dean and an accomplished advisory board to lead the School of Health, which was established with a $15 million gift. New partnerships, like the Pine Rest Academy, are already being established.

4. Launched The de Vries institute for Global Faculty Development in an effort to deepen and strengthen the university’s commitment to the integration of faith and learning.

6. Awarded bachelor’s degrees to the first three graduating classes of the Calvin Prison Initiative program during a Commencement ceremony held inside the confines of Handlon Correctional Facility in Ionia, Michigan. The ceremony was the first-of-its-kind in the state of Michigan.

7. Received an A- rating from S&P Global Ratings in an independent assessment of Calvin’s financial position. Calvin’s outlook is defined as stable.

8. Opened new doors for students with disabilities. A $1.2 million grant from the U.S. Department of Education puts Calvin on a path to be the first university in Michigan to offer a Comprehensive Transition and Post-Secondary program.

9. Calvin professors continued to advance scholarship and receive top honors in their fields. They’ve been selected to advise the U.S. Department of State, asked to contribute to a major international report on the future of education, authored a diversity playbook for Christian organizations, published major national studies on parents and education, received the rank of chevalier from the General Consul of France, and won the Lilly Fellows Program’s Book Award.

11. Became the first university in Michigan to pursue Solar-as-a-Service as an approach to accelerating the energy transition. The move signals a deepening of a long-held commitment to sustainability and creation care and is a significant step toward Calvin’s goal of achieving carbon neutrality by 2057.

12. Appointed Dr. Wiebe Boer as Calvin University’s 12th president. Firmly rooted within the Calvinist tradition and Reformed heritage of Calvin University and globally connected, coming from one of the most populous and diverse cities in the world (Lagos, Nigeria), Boer is uniquely positioned to lead Calvin University as it continues to expand its portfolio of learners and deepen its commitment to the integration of faith and learning from a Reformed perspective.