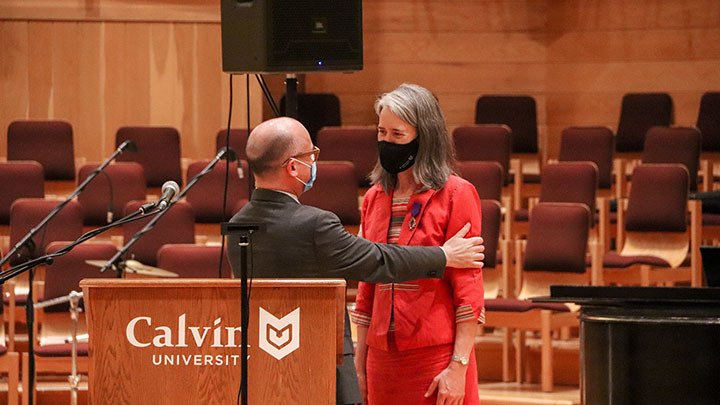 Professor Jolene Vos-Camy was admitted to the French Order of Academic Palms by the Consul General of France in Chicago, Guillaume Lacroix, during a ceremony at Calvin University on April 7, 2021. Photo courtesy: Jonathan Pheifer

Professor Jolene Vos-Camy was admitted to the French Order of Academic Palms by the Consul General of France in Chicago, Guillaume Lacroix, during a ceremony at Calvin University’s chapel on April 7, 2021. Vos-Camy, alongside Dan Golembeski from Grand Valley State University, was awarded the rank of chevalier, one of the oldest and most prestigious honors given by the French Republic.

First created by Napoleon in 1808, the honor recognizes excellence in “teaching and in the development of knowledge.” The French consulate in Chicago states that the award goes to “outstanding professors or researchers in humanities, arts and sciences who have contributed greatly over the years to promote French language and culture in the USA and strengthen French-American relationships.”

“The French culture just continues to fascinate me.”

Vos-Camy first became fascinated with the French culture and language when she was an exchange student in Pau, France at the age of 16. From there, she studied French at Calvin University and went on to earn a PhD in French literature at Indiana University. While finishing her dissertation in 1997, she accepted the position of professor at Calvin in part because she was asked to develop a study abroad program in France. Having been influenced so strongly by her own study abroad program, she was inspired to work toward helping new students experience it as well.

“It’s amazing to see students experience this for the first time,” said Vos-Camy. “And I get to talk to students before and after about it. The excitement of seeing something new, the challenge of functioning in a foreign language. You are so scared—and you do it! It’s such a confidence builder and eye opener. The experience changes their views of the world. You get a better understanding of what it means to be a world citizen.”

“I am elated that Professor Vos-Camy received such a high-ranking award from the French government,” said student Sarah MacCarthy. “Professor Vos-Camy was the first professor I met at Calvin University and was also the professor for my first French class. She inspired me to add a French minor to my engineering degree, and her passion for the French language continues to encourage me to move forward in learning it. I believe that after so many years of dedicating herself to learning the French language and teaching it to others, she definitely deserves this award.”

“It’s overwhelming,” Vos-Camy said of receiving the award. “I’m very touched and grateful to my colleagues who wrote letters of support. It’s a huge honor.”

Outside of the classroom, Vos-Camy has developed connections with local high school French teachers and the local French-speaking community. In 2020, she became the president of the local Alliance française de Grand Rapids.

Professor Otto Selles says, “Despite a heavy load as a teacher and an administrator involved in many demanding committees, she has managed to pursue an active research career, participating in international conferences and publishing in peer-reviewed journals. Professor Vos-Camy has also shown a commitment to French-speaking culture outside of France by leading two Interim trips to Haiti and participating most recently in a conference in Côte d’lvoire.”

Vos-Camy’s research concentrates on French 17th-century literature, often focusing on female authors like Antoinette de Salvan de Saliès. Recently, she has also been interested in a connection between one of Molière’s plays and slavery in the Mediterranean.