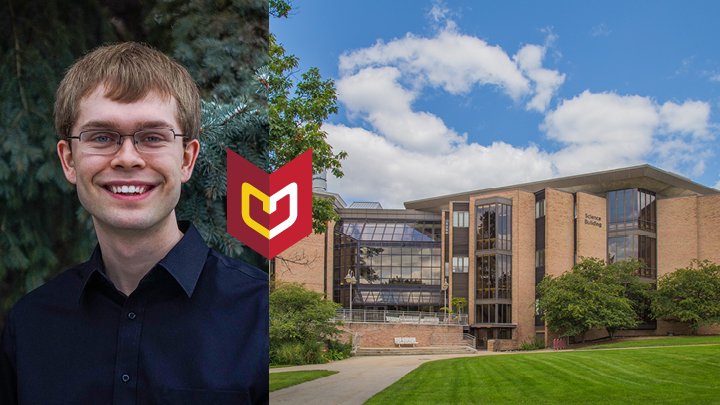 The Fannie and John Hertz Foundation, a nonprofit organization dedicated to empowering the most promising innovators in science and technology, has announced its 2021 recipients of the Hertz Fellowship.

The 12 students who received the prestigious award cut their teeth in research at places like Stanford, Harvard, Princeton, and MIT. For Nathanael Kazmierczak, his path ran through Calvin University.

“It’s hard to imagine I would have been better prepared in any other environment,” said Kazmierczak. “The research front at Calvin is fantastic.”

From his first year to graduation, Kazmierczak found opportunity through proximity. Like his peers at Calvin, he worked one-on-one with a professor and that experience provided him access to every aspect of the research process.

“Professor Vander Griend gave me space to try my creative solutions to problems and provided guidance to the right resource when things didn’t work out,” said Kazmierczak. “This allowed me to discover precision and efficiency in how I understood scientific problems.”

Kazmierczak started doing research with Doug Vander Griend, chair of the biochemistry and chemistry department, during his first year. A few months later, he spent ten weeks in his lab as part of Calvin’s Summer Research Program.

“He joined my lab, did the summer, and he didn’t stop. The hours came and went, but we still had ideas and he wanted to learn more,” said Vander Griend.

From student to peer

And so he continued to research throughout the academic year and by the end of the second summer of research, “I was working with a collaborator, exchanging research and ideas—that is exceptionally rare in undergraduate research. The work he did for me was comparable to a graduate thesis.”

Kazmierczak’s research led to three peer-reviewed journal publications, with two additional ones in the works.

“The level of hands-on involvement I had in the process of publishing with Professor Vander Griend was special, and I would not have gotten that anywhere else,” said Kazmierczak. “I was involved in the whole process: conceiving studies, executing studies, doing the writing, the editing, interacting with the submission process to journals. Professor Vander Griend gave me opportunities to participate in all those processes, and as a result I learned the scientific system really well.”

And Vander Griend also advocated for his student in other ways. When Kazmierczak was a Beckman Scholar from 2016-2017, Vander Griend nominated him to give an oral presentation at the Beckman symposium in Irvine, California. As a result, Kazmierczak was one of only two undergraduate researchers asked to speak.

Vander Griend also secured funding for his research team, including Kazmierczak, to attend the American Chemical Society (ACS) conferences with him, one in Washington D.C., the other in Philadelphia. Kazmierczak had the opportunity to present at both conferences.

“That was incredibly special because the environment at ACS meetings is enormous, thousands and thousands of people are there,” said Kazmierczak. “You get to meet all sorts of people from a diversity of institutions and practice presenting to large audiences.”

A major and minor melody

Kazmierczak admits that while his coursework and research experiences in the science division were second to none at Calvin, his confidence to present in front of large groups was honed in another discipline, his second major: music.

“As a freshman I was invited to play classical guitar for Calvin’s music festival, said Kazmierczak, who also sang in the gospel choir and was involved in many musical performances at Calvin. “To come in and present the art that I love so much really helped me learn how to carry myself in front of people.”

Kazmierczak also obtained minors in mathematics and ministry leadership during his time at Calvin, but the worldview he picked up at Calvin perhaps provided him with the most lasting value.

Shaping the mind and the heart

“My time at Calvin was incredibly formative in so many ways,” said Kazmierczak. “It is important when you go to college that you learn the details of your discipline: for me, to learn details of good chemistry and good musical performance. But what ultimately matters is the character formation that comes out of education—something that is unique to the liberal arts philosophy. By engaging in so many aspects of God’s creation and thinking about the connections between them, you develop an understanding of the truth, goodness, and beauty—three of the great virtues. Learning to love the true, good, and beautiful, and learning to have one’s character shaped in that way is something you can’t get anywhere else but in a liberal arts environment, especially a Christian liberal arts environment. It’s one of the most special things my education has given me.”

Set up for future success

And Kazmierczak’s time at Calvin also set him up to pursue his career vigorously. The Hertz Fellowship is one of the most generous awards of its kind, providing support for five years of graduate research and the freedom to pursue innovative ideas wherever they may lead. The fellowship empowers extraordinary innovators at a pivotal point in their careers, helping to shape their scientific pursuits and accelerate real-world impact.

“The 2021 Hertz Fellows embody the kind of transformative scientific talent our nation and world need now,” said Robbee Baker Kosak, president of the Fannie and John Hertz Foundation. “The fellows we’ve selected demonstrate an unusual capacity for creative exploration and problem-solving. We’re pleased to support their research and look forward to the impact these fellows will have on our future.”

Kazmierczak is excited for the journey ahead, and especially the community he’s joining. Hertz Fellows receive lifelong professional support, including mentoring and networking with a connected, powerful community of more than 1,200 researchers who have been awarded the Hertz Fellowship since 1963.

One of those fellows is a fellow Calvin grad, Cheri Ackerman ’11.

“When I look at things past Hertz Fellows have gone on to do, including Cheri, they have been involved in entrepreneurial startup scientific business collaborations that have opened new frontiers on the cutting-edge of science.”

A track record of success

And the path to the cutting-edge of research continues to pass through places like Stanford, Princeton, Harvard, MIT, and Calvin University.

“The quality of independent research that students are able to do at Calvin is so important for later success in graduate schools,” said Kazmierczak. “So, in my view, the undergraduate research experience at Calvin is hard to beat even when you look at all these other institutions that have Hertz Fellows.”

“I think we have a great and notable history of helping our students achieve the highest levels of scientific research, which means presentations, publications, and awards, like Beckman Scholars, like Goldwater scholars, Hertz scholars, you look at any of those lists and we are all over those lists,” said Vander Griend. “What that means is two-fold, we get promising students full of potential and we have the wherewithal to help those students actualize that potential.

“Nathanael has the right attitude and mental capacity to make a huge impact. It’s just a question of what he chooses to focus on.”