Calvin alum responds to the pandemic with innovative diagnostics 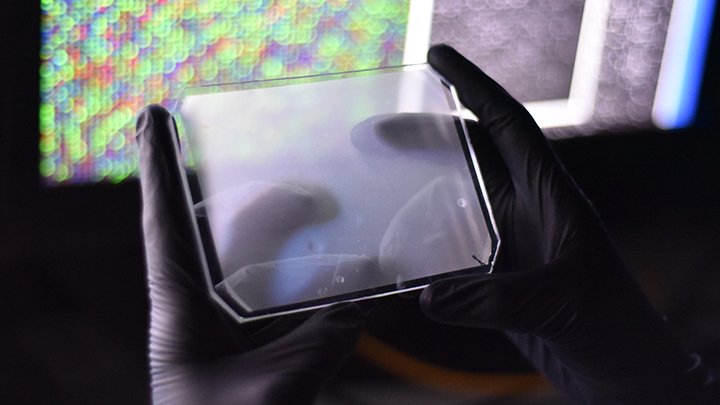 What Cheri Ackerman is doing in the lab as a postdoctoral fellow at the Broad Institute of MIT & Harvard is about as relevant as it gets in the current environment.

“We were working on this a couple of years before the pandemic happened and then this turned out to be more relevant than we thought it was going to be,” said Ackerman, a 2011 Calvin grad who majored in biochemistry and Spanish.

Leading in the lab

The this Ackerman is referring to is a new technology developed in the lab she’s working in that flexibly scales up CRISPR-based molecular diagnostics, using microfluidic chips that can run thousands of tests simultaneously. A single chip’s capacity ranges from detecting a single type of virus in more than 1,000 samples at a time to searching a small number of samples for more than 160 different viruses, including the COVID-19 virus.

Ackerman is a co-first author on a paper that highlights this technology which appeared in Nature in late April 2020.

“The thing that motivated this project is a longstanding need for diagnostics, and that is something that our collaborators have been working on for a long time,” said Ackerman.

So, at the Broad institute, there are a lot of engineers and scientists that work under the same roof. Scientists get to hang out with us engineers who work on technology, and new ideas are born from that.”

“We started dreaming about what would it look like for us to actually have a diagnostic platform that would allow you to diagnose every viral infection a person could get,” said Ackerman about her conversation with Cameron Myhrvold, a postdoctoral fellow. “What would it look like for every person who went to the doctor to get a real diagnosis, to know which virus made them sick? Could we design technology that was comprehensive enough, fast enough, cheap enough that you could imagine testing every single person for every single virus every time they got sick and actually get that level of data throughput, sample throughput?”

So the two labs, one an application-focused virus lab, the other a technology development lab, teamed up to address this problem. The result? Combinatorial Arrayed Reactions for Multiplexed Evaluation of Nucleic acids (CARMEN). In short, it’s a technology — validated on patient samples — that provides same-day results and could someday be harnessed for broad public-health efforts.

The team of researchers is now actively working on technologies to make CARMEN available as a point of care tool.

“This is an amazing story of interdisciplinary research and the power of people listening to each other and hearing the needs across disciplines and how people in those disciplines can meet those needs.”

Ackerman’s leading role in this amazing story had its genesis in a 10th grade biology class.

“I learned how DNA goes to RNA goes to protein,” said Ackerman, of the class. “This literally blew my mind. I thought this was the coolest thing I could possibly imagine in the world.”

Just a few years later she found herself in Professor Dave Koetje’s biology lab at Calvin University. “I was doing normal lab things like pipetting, and I remember him coming up to me and saying, ‘hey, I think you are kind of good at this, what do you think about summer research?’”

From there, Ackerman’s piqued interest was soon cultivated into a deep passion. She got connected to a summer research experience at the Van Andel Research Institute, had an opportunity to compete for the Beckman Scholars Program at Calvin, and soon knew this passion was only beginning.

Her next stop was grad school. She earned a PhD in chemical biology at the University of California-Berkeley. She also won the prestigious Hertz Fellowship, which meant a full ride scholarship.

“The morning she received it [Hertz Fellowship], I was in a meeting with the provost,” said Calvin biochemistry professor Eric Arnoys, who was Ackerman’s research adviser at Calvin. “We had just got word, and the provost turned to me and said, ‘this is the equivalent of being an NBA lottery pick, it’s a big deal.’

And this NBA lottery pick panned out. She’s working in one of the most prestigious labs on research whose relevance is unparalleled at this time. But, it’s not what she’s doing, but rather why she’s doing it that matters most to her … and that depth of learning was established at Calvin.

“The aspect of incorporating faith and science has also been really powerful in my life. Calvin was a place where I learned that my mind and my faith are not at odds. In fact, they work together,” said Ackerman. “I have the amazing honor and opportunity to work at an institute like MIT and the Broad, and it’s not just to be a scientist there, but it’s to be a person that cares about other people and is salt and light … Having that sense of grounding, the sense that the work that I do is because God has put me here, to God be the glory for this work, it is just an amazing way of going through life, and I think Calvin was central to me exploring that and feeling comfortable owning that, feeling comfortable expressing that.”