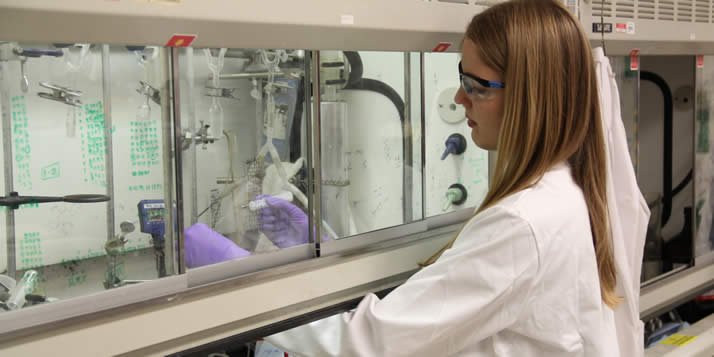 Calvin College is one of just 12 institutions nationwide to receive a 2014 Beckman Scholars Program, which is awarded to colleges who are committed to quality undergraduate research.

“This is a very notable statement that what’s going on in chemistry, biochemistry and biology at Calvin is comparable to the best that’s going on anywhere else in the country,” said Carolyn Anderson, a chemistry professor at Calvin College.

The $104,000 award—funded by the Arnold and Mabel Beckman Foundation—will fund in-depth research experiences for four students in biology, biochemistry or chemistry over the next three years. Each of the scholars will pursue an independent research project under the direction of a faculty mentor. The goal of the program is to develop future leaders in the areas of scientific research and innovation and to prepare students well for graduate school.

This is the second time Calvin College has been awarded a Beckman Scholars Program; the first was received in 2008 and funded a cohort of four scholars. Anderson says the first time an institution is chosen it shows that they have the right qualifications. The second time: that they can walk the walk.

“The fact we’ve funded this again is evidence that we not only look good on paper, but it speaks highly of the capabilities of our first four students and the work that they have done.”

Anderson said the Beckman Scholars Program was a jumpstart for the four extremely talented students, all of whom went on to become Goldwater Scholars at Calvin. And, all four have won major graduate awards, studying at places like UC-Berkeley, MIT and the University of North Carolina.

Anderson, who researched alongside two Beckman Scholars from the first group, says a major benefit of the program is that the students are funded well, so that they don’t need to seek additional employment but can focus solely on their research.

“Having that kind of focus really enabled them to take research to another level, to a point where they could really be peer collaborators,” said Anderson, “where they could come to me and say ‘this is the next study we should do, I think we should try this.’ They were able to direct their research more than most students.”

The newest award will allow Calvin to recognize four new Scholars over a three-year period with at least one recipient per year. A group of Calvin College science faculty have reviewed applications from current students and selected two students to begin research this summer. Andrea Bootsma, a senior chemistry and mathematics double major will be researching alongside Carolyn Anderson and Susan Hromada, a junior biochemistry major, will conduct research with chemistry professor David Benson.

Each student named a Beckman Scholar will be awarded $26,000, $5,000 of which is for the scholar’s faculty mentor. The funding covers two summers of full-time research and 10 hours per week of research during the academic year in between. Scholars are also expected to attend a national meeting to present their work.