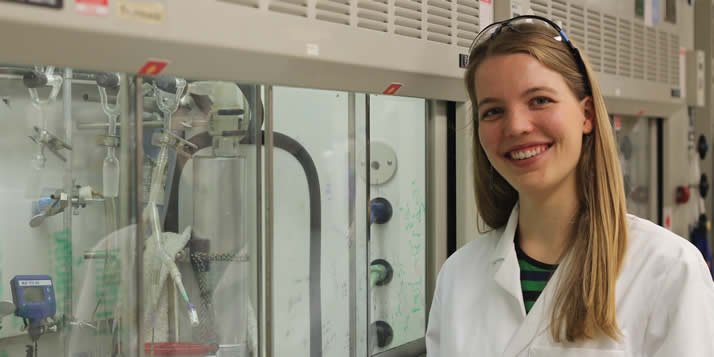 Cheri Ackerman, a former Goldwater Scholar, seeks a balance as a Christian and a biochemist.

During her first year of earning her PhD in chemical biology at the University of California, Berkeley, 2011 Calvin grad Cheri Ackerman applied for a Hertz Fellowship. The fellowship, bestowed by the Hertz Foundation, supports gifted leaders in the applied sciences and engineering. It is awarded to 15 to 20 applicants out of 600.

Ackerman was among the finalists chosen to undergo two rounds of interviews for the award: one conducted by a technical interviewer and another conducted by an experienced scientist or engineer.

“It can be a pretty nerve-wracking process,” Ackerman admitted. “A lot of people talk about the Hertz interview as one of the worst things you can go through in grad school.” As she was praying about the interview, Ackerman got a sense that her purpose in the application process was to represent God—no matter what the outcome. “It was pretty clear that God was going to be there, and He would give me peace,” she recounted. “I got to the interview, and it went so smoothly.” When she landed the second interview, Ackerman again prayed and again heard the message: “God was (saying), ‘Go into that interview, and glorify me, and show those interviewers that you’re my daughter.”

When she learned she was one of the 15 Hertz Fellows for 2012–2013, Ackerman was eager to give credit where it was due: “I can definitely see that it’s not something I’ve necessarily earned,” she said. “Yes, I worked hard for it. Yes, I researched. But I look at it as a gift from God.”

The $250, 000 Hertz Fellowship will pay Ackerman’s Berkeley tuition for five years and provide her with a sizeable stipend. The idea behind the award is to free up young minds to innovate, said Ackerman: “You get to pick the projects you work on and to pursue ideas that might seem crazy.”

The fellowship is a rare opportunity in the current landscape of science funding, said Calvin chemistry professor Eric Arnoys: “With a lot of funding, you have to be confident that things are going to ‘work,’ or you might not see funding again,” he said.

Ackerman impressed Arnoys even in her first year at Calvin, when he interviewed her for a research position: “She was asking me questions about my work that I may have gotten from someone in my field or someone who was visiting for a seminar … ,” he said. “She’s the type of person that the award should go to. She’s extremely bright. She’s curious. She’s persistent.” (Ackerman was Calvin's sole Goldwater Scholar for 2010–2011.)

Arnoys is equally impressed by his former student’s character: “Both in her words and her actions, there’s no secret what she believes, but she’s also humble,” he said. “She treats everyone as equals.”

Having completed three research rotations at Berkeley, Ackerman is pausing to sketch out the topic of her PhD research. She’s interested in creating new chemical tools that allow biologists and chemists to ask new questions about biology. “A lot of the questions that we can answer are limited by the technology that’s available to answer those questions,” Ackerman said. “My research goal is to expand that technology in order to allow us to ask and answer those new questions.” Ackerman will be working under the direction of Dr. Christopher Chang, studying how copper is localized and transported within living organisms.

After Berkeley, she’d like to do postdoctoral work and, eventually, teach at a research university. Right now, she’s weighing the trade-offs that come with that kind of career. “It eats up the amount of time that you can actually be home—being with your family and investing your time in your church. You definitely have to know what you’re getting into. You just have to know if you’re willing to invest the time,” she said.

Ackerman wants more of a work-life balance: “In academics, a lot of people see their value in terms of, ‘How many awards have I won?’ ‘How many papers have I published?’ And I’m happy to know that my worth comes from who I am in God.”

She learned how to be an academic and a Christian from her Calvin professors: “And if I hadn’t gone to Calvin, I might not have learned it,” Ackerman said. “I can almost hear their words in my ear: ‘You are more than your work.’  That’s really what winning this fellowship is for me. It’s a spiritual journey as well as being an academic or career journey.”