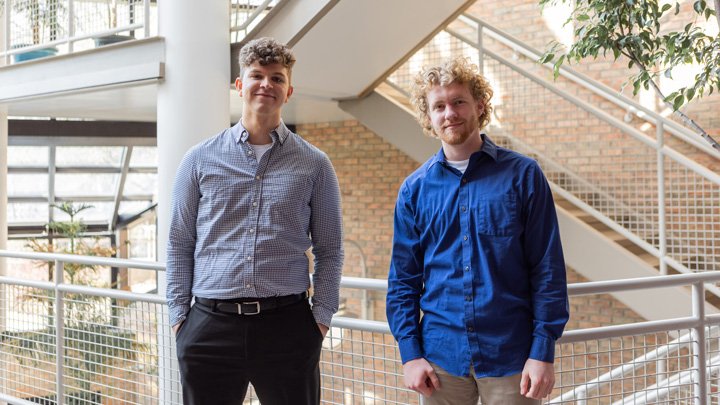 Calvin University juniors Fenton Lawler and Willem Hoogendam were recently named Goldwater Scholars, widely considered the most prestigious award for undergraduate students in the natural sciences, mathematics, and engineering in the United States.

“I left school after receiving the award and bought myself a cake,” said Lawler.

It truly is reason for celebration. After all, Lawler and Hoogendam are in elite company—only about 410 of these scholarships are given out each year nationwide, and only 11 were given out to students in the state of Michigan.

Their receiving the award is impressive, but so too is the path they took to get there.

Starting on the path

Coming out of high school, Hoogendam and Lawler both had ambitions of getting a PhD and doing research, but both needed convincing, Hoogendam a bit more than Lawler, that Calvin would be the initial stop on that journey. While their family was helping them make the decision, it really came down to their professors.

“I talked with a professor and got to know him well, he convinced me to come here,” said Lawler.

“I didn’t know undergraduate research was a thing before getting to Calvin,” said Hoogendam, a physics and mathematics major.

But the two would soon find out it was more than a thing, and that they didn’t have to wait long to dive right in. “My advisor said you should look at research, so I did it for a summer,” said Hoogendam.

He liked it so much, the next summer he was back at it again.

“I’m the only one who did research with Professor Smolinski both summers working with him. It was me and him, one-on-one,” said Hoogendam. “You have the professor’s full attention, so you’re not just some lab rat that does menial tasks. You are having important conversations, not just producing data or doing grunt work; you are invested in the discovery.”

For Lawler, it wasn’t the subject so much as the guide that drew him into research early on.

“I knew I wanted to do research, not sure who with, I talked with Professor Vander Griend, my advisor, and he told me about the research he does, which was out of my field,” said Lawler, an electrical engineering major at the time. “I just liked that professor so much that I started researching with him.”

Lawler’s experience in the lab didn’t disappoint and he continued in Vander Griend’s lab. While his research started with more of an engineering-related focus, it began to dip into more chemistry-related areas.

“I realized I liked chemistry, even though in high school I ruled it out,” said Lawler. “I think it was mostly the professor, he was a great teacher for me, and so chemistry became a little more of my focus.”

And so Lawler added a second major in biochemistry.

“This past summer I was the only person researching under Vander Griend, one-on-one, which I don’t think would happen anywhere else,” said Lawler.

Equipped for the terrain ahead

The research Lawler and Hoogendam have done has not only deepened their understanding of their research and their relationships with their professors, it has also led to greater possibilities, including opportunities to present their research at regional conferences, and for Lawler to get into the Beckman Scholars Program at Calvin.

And, their research experience at Calvin has equipped them for the terrain ahead.

“I have a position this summer at the University of Hawaii at the Institute for Astronomy doing research for them,” said Hoogendam. “That was definitely a door that opened because I did research at Calvin.”

“This research I’m doing is also going to allow me to publish papers which is most valuable when applying to grad schools,” said Fenton.

So too is striking gold. “This is a well-known award when it comes to grad schools,” said Fenton. “They know what a Goldwater is, and it’s a good indication of who Calvin is.”