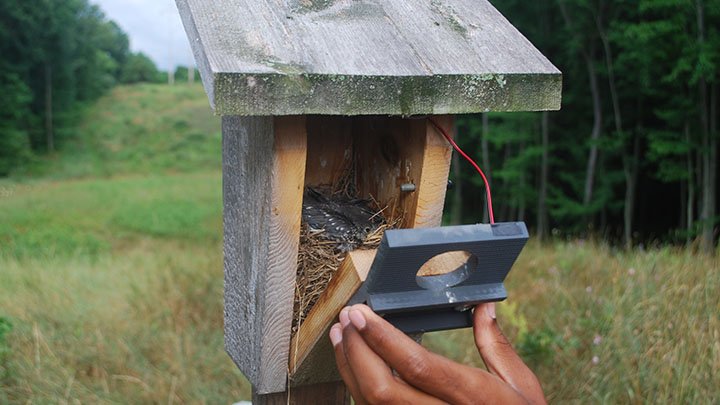 A hand opening up a bird feeder with a bird nesting inside.

The student researchers walked out of the woods into a power line clearing full of tall grass and wildflowers. It stretched from the road towards and past them, the lines running over a series of ridges until they passed out of sight.

As they approached the boxes, what seemed like the sound of a distant highway got increasingly louder, and Eapen pointed out a fake rock with a speaker connected to a pole-mounted solar panel apparatus. “That’s our noise generator,” he said, “it’s got the timer set to come on for six hours each morning.”

He then opened the box, revealing the nestling blue birds resting within, who were only two weeks old.

Over the next 15 minutes, Pineda and Eapen spread out their equipment in front of the box and carefully removed the young birds one by one, taking blood samples and a variety of measurements—wing length, lower leg length, and mass—before gently replacing them. Throughout, the nestlings remained still which Pineda noted was not always the case.

The one described above, with biology professor Darren Proppe, intends to evaluate the impact of human noise pollution on bluebird reproduction, health, feeding, survivorship, and nest selection. The other, with biology professor Dave Warners, tracks the flowering period of native prairie plants that grow at Flat Iron Lake Nature Preserve to determine how climate change has affected each species’ flowering behavior, as a shift in flowering time could endanger each population's reproductive relationship with their pollinators.

“To get an idea of which plants are most at risk for something like this to happen, we need a long-term data set that allows us to tease out variability caused by weather, so we can truly evaluate the longer term effects of climate change,” said Warners. “That’s what we’re doing at Flat Iron Lake.”

“I think one of the fun pieces of the project, but also one of the challenging pieces, is that there are so many different aspects,” said Proppe. “The amount of tools that they’re using is really broad,” he added, “which is a pretty unique component of the project.”

Collaboration, Proppe explained, has been a key part of the project, as the three organizations and the individual whose properties are being accessed are invested in the health of their bluebird populations.

“The collaborative effort has been fun because it means that what we’re doing is going to extend further—we have people that care and are waiting to see what will happen,” said Proppe.