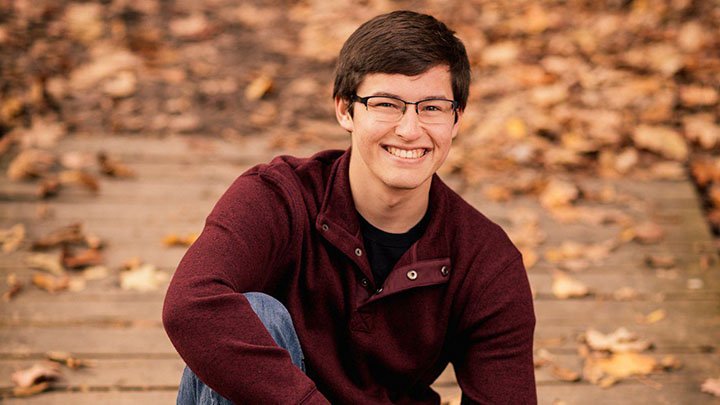 The power of a single voice.

Andrew Prezioso knew that well. And so he used his well.

To sing. To laugh. To encourage.

While Andrew’s voice can no longer be heard on this earth, he’s remembered as someone who used his to shape communities.

“He brought light to the people he was around and made them feel special,” said Jill Geyer, who led the Wilderness Orientation trip Andrew was on the summer before he started at Calvin.

Making a joyful noise to the Lord

“I can picture him on the beach of North Manitou Island at sunset, gleefully singing an assortment of musical numbers. On another day, I remember him leading our orientation group in worship with his eyes closed in his smooth strong voice,” said Geyer.

Andrew’s singing voice was something that caught everyone’s attention.

“He had a beautiful, wonderful, larger-than-life singing voice,” said Derek Ten Pas, an engineering major who lived in the same residence hall with Andrew freshman year.

His singing was enjoyed in Beets-Veenstra residence hall, where he led dorm worship as a Barnabas, in impromptu moments around campus, and in the university’s gospel choir.

“His voice was made to glorify God in the way that genre [gospel] of music provides,” said Ten Pas.

Certainly his singing voice will be remembered, but so will his “contagious laugh.”

“Many times at dorm events I remember knowing he was there before seeing him, just because of his laughter,” said Ten Pas. “It was the kind of laughter that prompted you to laugh, even if you just found something mildly funny.”

There was no denying that Andrew’s voice could carry in groups. But it wielded its greatest power in quieter, more intimate settings.

“He was a person I could talk to about anything and he would not just nod to anything I say but was willing to share his own views on the matter,” said Benedict Jojo Arthur, who met Andrew during the Engineering Summer Program in Germany.

“He was willing to help out classmates if they were having an issue with an assignment and worked well in team exercises,” said Phil Leerar, an adjunct professor in the engineering department.

“Working in the Rhetoric Center, he was eager to talk with writers about a lab report as much as a short story,” said Saupe.

Saupe also knew Andrew from working with him at Camp Mowana (an ELCA camp in Ohio): “He was a great teacher, wonderful with children, a good listener, generous with his time and talents.”

In short, Andrew cared about people. While his voice stood out in a crowd, he elevated and valued everyone else’s.

“It was evident that he had a passion for people, and a passion to learn more about God. He was a consistent attendee of our dorm floor Bible studies, and always asked thoughtful questions that pushed our conversations even deeper about our faith,” said Ten Pas. “He was quick to affirm people when they shared something in Bible study. He let them know that their voice mattered and was valued.”

The words penned by the Psalmist centuries ago seem to fit Andrew’s 20 years on this earth well … and for an eternity more.

“Praise the Lord! I will give thanks to the Lord with my whole heart.”

Andrew took his own life on Thursday, January 16, 2020, and the Calvin University community reminds anyone who is struggling with mental health issues to seek help. The National Suicide Prevention Hotline is 1-800-273-8255 and on-campus resources for students include the Center for Counseling and Wellness and Campus Ministries. Please pray for the family and friends of Andrew as they grieve this tragic loss.

Andrew is survived by his parents, Pam and Donald, his brother Michael, and his grandparents. A memorial service will be held at 11 a.m. on Saturday, Jan. 25 at Trinity Lutheran Church (508 Center Street) in Ashland, Ohio. Members of the family will receive relatives and friends at Trinity Lutheran Church from 5-8 p.m. on Friday, Jan. 24. An on-campus memorial service will be held in Calvin's Chapel at 4 p.m. on Monday, Feb. 10, with a reception to follow in the Spoelhof Atrium. 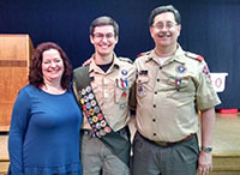 Andrew with his parents Pam and Donald 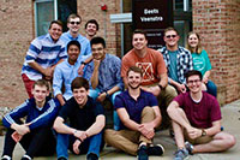 Andrew with his fellow Beets-Veenstra residents 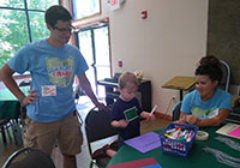 “I was with the Beets-Veenstra community last night, and I heard stories about Andrew’s distinctive laugh. They described it as loud and joy filled. Others said, as busy as his schedule kept him, when you talked with him face-to-face you felt like the most important person. He was intentional with his eye contact and made every effort to make people feel seen and important. One person mentioned how they called Andrew by the wrong name for half a semester before they realized their error, but Andrew responded each time as if ‘Joel’ was actually his name - his kindness and care extending to responding to whatever name people used for him.”

"Andrew was a student in my ENGR209B class in the Fall 2019 semester. Of course, professors remember students by their academic performance, and Andrew was one of the top performers in a very challenging sophomore course. But more than that, I remember his pleasant and cheerful presence in the classroom. I appreciated his smile when he entered. I appreciated his quizzical looks when I wasn’t explaining well. I appreciated his willingness to work hard and provide academic leadership on group projects and lab assignments.

However, Andrew was more than an engineering student. He served as a writing tutor at the Rhetoric Center. In that capacity, he interviewed me about writing by engineers, and it was clear that he was one of few students who understands that writing is vital for engineers. His questions were as refreshing as they were relevant to his work at the RC and his future career as a practicing engineer. I am confident that many peers benefitted from his gentle suggestions to improve their writing.

I will miss Andrew. I’ll miss his analytical abilities and his writing acumen. I’ll miss his smile and his roll-up-my-sleeves-and-get-it-done attitude. I grieve the fact that he won’t be helping his peers with their writing this coming semester and beyond. And I grieve the fact that I won’t see him develop into the engineer that he could have been."