The "rule of law" refers to the concept that no individual—ruler or private citizen—stands above the law. To safeguard that principle, modern democracies typically bind governmental authorities to written, publicly disclosed laws and procedures. The rule of law provides predictability: citizens can plan their lives because they have access to the rules of the game, and they know they can assert their rights under those rules if government acts arbitrarily. While those same laws and procedures can limit a citizen’s own freedom to some extent, the principle of rule of law suggests such limitations, if reasonable, are preferable to arbitrary government.

The Pruis Rule of Law Endowment was established at Calvin University in 2008 by Ed Zeilstra in honor of long-time Calvin Business professor Don Pruis to promote an appreciation for the rule of law—an essential cultural and legal arrangement of great interest to Pruis. The Henry Institute is working to generate activities that foster and promote a renewed appreciation among students, faculty, staff, and the broader West Michigan community for the concept.

The Pruis Rule of Law Lecture series has been sponsored by the Henry Institute at Calvin since 2010, and features speakers who are researching issues related to the rule of law or who have personally experienced issues surrounding the development of the rule of law in countries around the globe.

The 2021 Henry Institute Rule of Law Lecture featured Justin Giboney speaking on Faithful Christian Politics. In his lecture, Giboney discussed what a faithful Christian witness should look like in the public square today. He challenged Christians on both sides of the aisle to place Christian principles over partisanship as he detailed a Gospel-centered framework for civic engagement.

Giboney is an ordained minister, attorney and political strategist in Atlanta, GA. He is also the co-founder and president of the AND Campaign, a coalition of biblical Christians who are determined to address the sociopolitical arena with the compassion and conviction of the Gospel of Jesus Christ. He served as the co-chair of Obama for America’s Gen44-Atlanta initiative, and in 2012 and 2016 Georgia’s 5th congressional district elected him as a delegate for the Democratic National Convention. Giboney also served on the Urban League of Greater Atlanta Board of Directors and has written op-eds for publications such as Christianity Today and The Hill.

Watch a recording of the lecture here. 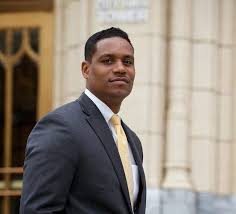