Yonker is Professor of the Year 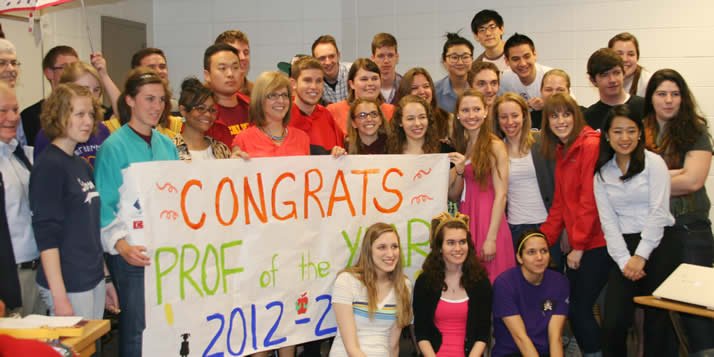 The ambush was planned for 12:07 p.m., moments after psychology professor Julie Yonker began teaching her “Developmental Psychology” class. At that point, a crowd of colleagues, family friends, a reporter from the Chimes and a horde of students began surging into the classroom. The students were clad in costumes and some of them holding a banner that read “Congrats Prof of the Year 2012–2013.”

The crowd begged for a speech, and Yonker kept it brief: “I love this work … ,” she said. “I really enjoy teaching all of you. For me, it’s not the work; it’s the joy … . I mean, this is like an out-of-body experience, but it’s you guys—and Betsy, what in the world are you wearing?”

Senior psychology major Betsy Baumann was dressed up as an order of McDonald’s French fries. “It’s because of you that I don’t have to work here,” quipped Baumann, one of Yonker’s student researchers. “She genuinely cares about all of her students, not just academically but in all areas of their lives,” Baumann described Yonker.

James Los, a senior psychology major dressed for the occasion as an Angry Bird, agreed: “I owe Julie a great debt with my application to grad school,” he said. “She helped me to find jobs that would be applicable to my job as a school psychologist, and she helped me with all of the other things advisors do.”

Psychology professor Scott Stehouwer affirmed the students’ praise. “I get very high marks for advising,” said Stehouwer, last year’s choice for Professor of the Year, “but I’m ashamed and embarrassed when I compare what I do with what she does … . She will work on your future plans, and she will help you to write a good resume … . You can’t know her very well without knowing her heartfelt desire to assist students in doing things God’s kingdom,” he said.

Yonker graduated from Calvin in 1982 with a bachelor’s of science in biology/chemistry. After earning a PhD in cognitive and experimental psychology from the University of Stockholm (she learned Swedish to do so), she completed a post-doctoral fellowship in substance abuse at the University of Cincinnati. Then Yonker returned to her alma mater, where she currently teaches psychology, “Lifespan Development" and “Adolescent and Adult Development” and leads the off-campus interim “The European Influence on the History of Psychology and Religion.”

She has researched faith and religious development in emerging adulthood, the long-term effects of the Dutch Hunger Winter and the biological contributors to cognitive function in adults. Through her teaching, Yonker works at expanding her students’ experience of the world beyond Calvin. For last year’s “Developmental Psychology II: Adolescence and Adulthood” class, she assigned students to write life histories of older adults living in a senior residential community.

Yonker also founded and supervises the Psych Ambassadors, a group of senior psychology students who mentor their younger classmates and assist at department functions. And every week, said Stehouwer, Yonker takes time out of her schedule to feed Alzheimer’s patients at a local care facility.

“She is virtually tireless,” he claimed. “Don’t try to keep up with her when she walks. Students have tried to do that on her interim in Europe, and she tires them out.”

The Professor of the Year award is awarded annually by Calvin’s senior class. This year, the process of selection started in March with nominations, which were winnowed by student leaders. Seniors then vote on a top-five list of candidates. “The nominating, the voting, the crashing—it’s all done by students. How many other awards crash a classroom and do goofy things?” said associate director for alumni relations Emily Dock, who helped plan the event, including bringing the traditional Krispy Kreme donuts.

Yonker’s daughter and son-in-law Cassie and Ross Wielard, both ’09 Calvin grads, and her husband Jeff Yonker ’82 were on hand for the occasion. All three confessed themselves proud of Yonker and relieved that they don’t have to keep the secret of her honor (they knew last Thursday) any longer.

Stehouwer confessed himself delighted at his successor. “She’s a marvelous pick … ,” he said, “and I’m just hoping for a three-peat.” 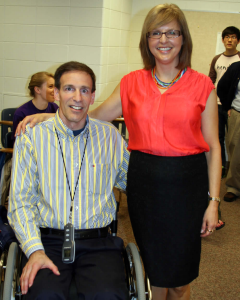 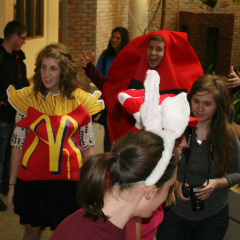 Previous Professors of the Year