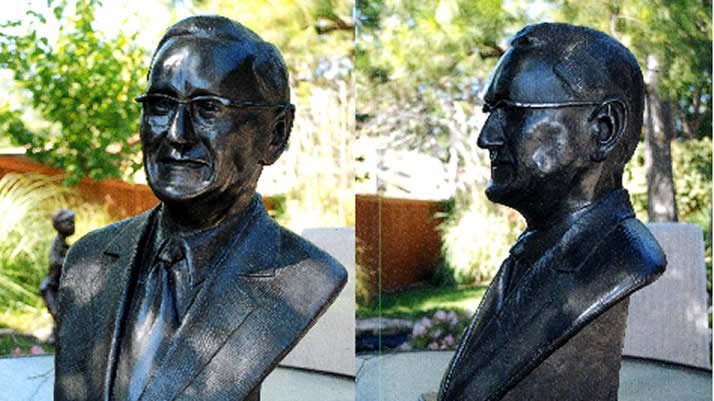 Late in October, Joel Zwart, the college’s director of exhibitions, took delivery of a bronze bust of Calvin emeritus president William Spoelhof. The bust, created by 1958 Calvin alumnus Ken Hoving now sits atop a pedestal created by the college’s physical plant staff in the remodeled atrium of the Spoelhof Center.

"Dr. Spoelhof is, unquestionably, one of the key leaders in the history of the college,” said Mike Van Denend, Calvin director of alumni, parent and community relations. “And to have students pause for a minute and read about him—think about him and who he was—that’s good for Calvin.”

Spoelhof died on Dec. 3, 2008, five days short of his 99th birthday, and the Heritage Chapter, those Calvin alumni who graduated 50 years ago, wanted to honor his legacy.

"They noted with gratitude the wonderful remodeling of the Spoelhof Center Atrium,” said Van Denend. "They noted how guests from the admissions office and others would come to that space. They said, ‘Might there be something we could do to that space to remind committee members about who Spoelhof was?’”

Hoving, whose Calvin degree was in psychology, retired in 1991 from his post as a graduate dean and the vice president of research at the University of Oklahoma. He said he was inspired to cast the bronze bust because of his regard for the late president.

"President Spoelhof had served as president when I was a student, and I admired him from a distance,” Hoving said. “And I heard over the years from friends that he maintained his friendships and that he had coffee with his friends on campus. And I admired that.”

Some of those coffee-drinking friends were present when Spoelhof’s bronze likeness was unveiled at a private reception on December 8. (The event was held on what would have been Spoelhof’s 100th birthday.) Also present were officers of the Heritage Chapter of the Calvin Alumni Association, the group that commissioned the work of art. Hoving spoke at the event, which was emceed by Calvin chaplain emeritus Dale Cooper.

The reception also recognized another Spoelhof likeness: a wood carving of the late president crafted by English professor emeritus Clarence Walhout. That memorial will take up its permanent home in the office of the president.

Zwart believes that the Spoelhof Center is an appropriate home for both likenesses, and not just because the building was named for Spoelhof: “It’s a building that exemplifies his idea of college buildings, something that combines academics with the business side of the college,” Zwart said.

Darlene Meyering, the executive associate to the current president, is grateful that  both the memorials and the facility that serves as their showcase honor the former president, her friend: “I think that the legacy of his leadership is so important to the college …” Meyering said. “He really searched out Reformed Christian scholars and made sure that they were the best. So that legacy put the college on a firm footing.”