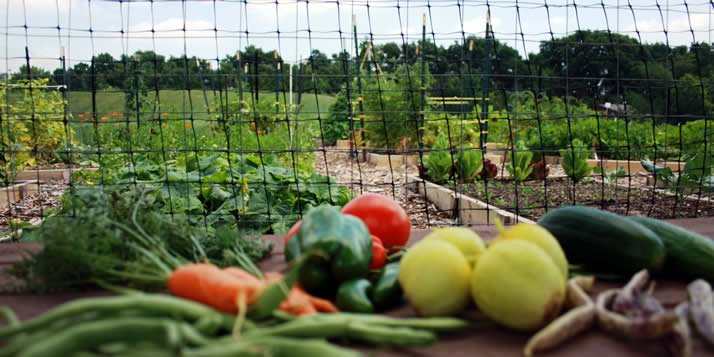 Vegetables from the community garden

In celebration of Earth Week, April 20–24, various Calvin student organizations will be hosting a discussion, a film screening, a wildflower rescue and the Mad Farmer Food Festival—an event featuring the groundbreaking of a new community garden.

Brian Schaap, a co-leader of the Environmental Stewardship Coalition (ESC), is heartened that the ESC, residence life, the Students for Compassionate Living (SCL), Democracy Matters and the Social Justice Coalition, have all planned events for the week:

"To see (participation) coming from all over campus is encouraging,” Schaap said. “Different student groups have different areas of expertise.”

The first Earth Week event is a panel discussion on student activism and political involvement held at 7 p.m., Monday April 20, in the Meeter Center Lecture Hall. Sponsored by all four student groups, the panel will feature Joan Mandle, executive director of the national organization Democracy Matters. The event will feature vegan treats.

Next up on the Earth Week calendar is a screening of “A Convenient Truth: Urban Solutions from Curitiba Brazil at 7 p.m. Tuesday, April 21 in the Commons Lecture Hall. The film showcases innovations in transportation, recycling, affordable housing and seasonal parks in one Brazilian community. “It’s a city that’s doing a lot of initiatives directed at sustainability in a lot of sectors,” said Schaap, “and it’s roughly the size of Grand Rapids—so we’re hopeful we can learn something from Curitiba.”

The following day, Wednesday, April 22, the ESC is sponsoring a wildflower rescue in the woody area on the west side of Spoelhof Center. The area will be torn out this summer when the department of art and art history undergoes renovation. “There’s a lot of wildflowers in there,” said Schaap of the area.

On Saturday, the residence life department will sponsor the Mad Farmer Food Festival, an event featuring a campus farmer’s market, live music, fresh local food catered by Marie Catrib’s and Gaia, and various breakout sessions and teach-ins. The event, held 10 a.m.–3 p.m. at the Knollcrest East apartments, will also include the groundbreaking for a new community garden located near the apartments.

"We’re just going to have a party where we turn over the sod, put some frames down and put in the topsoil,” said Schaap. “Planting will probably happen in a couple of weeks. The raised-bed garden is intended for use by students, faculty and staff and for teaching purposes. “It’s going to bring people together, hopefully,” Schaap said.

Earth Week is built around Earth Day, which falls on Wednesday, April 22. Schaap reflected on the importance of the celebration. “I think that it’s become more clear that it’s important to see the effect we’re having on non-human creation, but then also the effect our natural degradation is having on humans,” he said. “So many great events can be hosted on campus, so it’s good to spread them over a week, and enjoy a variety of activities,” he said.