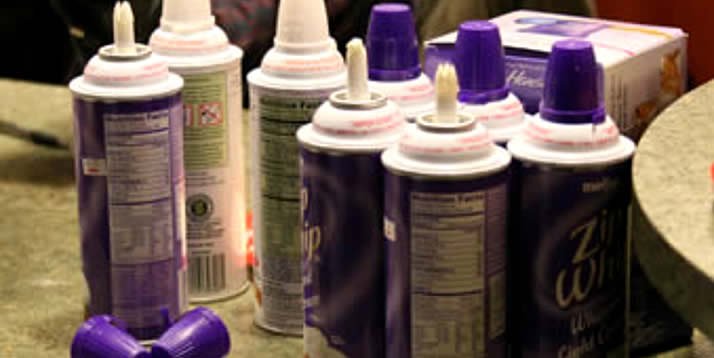 There’s a mess of whipped cream cans perched on the front desk of Nordewier-Vanderwerp Hall and no pumpkin pies in sight. This is a dorm service auction, and the whipped cream is meant for faces, not pies.

There’s a mess of whipped cream cans perched on the front desk of Nordewier-Vanderwerp Hall and no pumpkin pies in sight. This is a dorm service auction, and the whipped cream is meant for faces, not pies.

At this time each year, Calvin residence halls take part in service auctions much like the one NVW recently put on. Students pledge certain goods and services for sale during the auction—items range from sensible things like baked goods, dinner at a nice restaurant and paper editing to things like “a hug every day during the second semester” (sold for $20) and a promised reenactment of the Lion King “with costumes” (sold for $5). Fellow dorm students bid on these items until there is nothing more to sell. Along the way, certain fundraising landmarks are met with rewards like “the RAs will jump in the Sem Pond,” “extra hour of open house every Wednesday during interim,” and the ultimate reward, when the proceeds reach $2,000, “Jon, RA from 3rd Werp will shave his head.”

Fifty or 60 students from NVW crowd into their dorm’s front lobby. Some pay attention to the proceedings at the front of the room, others mill in and out of the auction that goes strong for at least three hours, aiming to raise at least $2,000 for Camp Fire USA’s Camelot Woods Kid’s Club. Whipped cream incidents punctuate the long evening, adding to the fun involved in raising the goal amount for the dorm’s community partnership.

For Joe Garbini, a sophomore from Germantown, Md., the enthusiasm students had for his dorm’s service auction in Beets-Veenstra wasn’t only about fun and games.

“Either because of the care for the partnership, the hilarious incentives of the dorm leadership for raising money or because of the variety of potentially useful services offered by their peers, the students were very excited and willing to donate money to the cause,” he said.

The money from these service auctions goes directly to dorm community partnerships, relationships developed by students in residence halls with community organizations over the course of the year. Most of the partnerships, like those with organizations like Grandville Avenue Public Library, Mosaic Life Church and Baxter Community Center, see students volunteering on a weekly basis at after-school programs for underserved children and teens. The students do everything from tutoring to teaching English as a Second Language and playing games with children.

NVW’s work at Camelot Woods Kid’s Club provides many benefits—many of them intangible—to the kids who attend the program, said Matt Gleason, a sophomore from Mundelein, Ill.

“Really, we’re there to get to know the kids, really getting to know their personalities, their passions, and learning about their lives,” he said.

“Their time with our kids building relationships is so critical,” she said. “They work with a population of kids who experience a lot of transience in their relationships. Their families are having some real struggles, even keeping food on the table. So when they can build relationships with college students (who are younger than our usual staff) it’s just priceless for them. … I know that they even visit the students back at Calvin, seeing the campus. And then the kids think, ‘Hmm, maybe that’s something I can do, maybe I can go to college someday!’”

The partnerships, facilitated by Calvin’s Service Learning Center and students who commit to being community partnership coordinators (CPCs) for their dorms, are designed, like the service auctions, to bring mutual benefit to the community and the student volunteers. Katherine Artz is a sophomore from Olney, Md. She serves as a CPC for Rooks-Van-Dellen Hall and sees the impact working in the community has on her fellow students:

“I have watched many students change from being hesitant to go to Baxter [Community Center] to being excited to see the kids, play with them and help them with their homework. It helps us remember that we live in a world that is not only composed of college students and that there are people whose days we can brighten just by being willing to spend a little time with them,” she said.

“Working with Roosevelt Park … allows students to participate in a community and culture that is different than what they may have experienced growing up,” Cousineau said. “We are faced with issues like underfunded education, immigration, differences in socio-economic status and cultural diversity. These issues are very real and it is good for us to have first-hand encounters with them.”

Auctions do more than raise money

The service auctions get more students, particularly those who don’t have time to participate in weekly volunteer work, involved in their dorm’s partnership. At Boer-Bennink, representatives from Grandville Avenue Public Library spoke to students about their organization before the auction began. “I think having them come was a great way to let [the students] know a little more about what we do at the library—and we’re hoping to get some more interest in it,” said Carissa Barents, a sophomore CPC from Tucson, Ariz.

For others who spend time volunteering at the organizations, the auctions are a way to expand the partnership to include financial support, said assistant dean for residence life, Jay Wise.

“It’s not like we’re writing a check and sending it off,” said Wise, “It’s local, and students are participating in service and seeing where the money is going—to things like books, pencils, snacks, field trips.”

The service auction in Kalsbeek-Huizenga-van-Reken brought students together from each wing of the dorm, including the newly-dedicated van Reken Hall with its three living-learning communities.

“Our partnership is helping to unite the dorm in a small way. It was definitely a transition this year adding a new wing and trying to incorporate it into a larger dorm. Things like the partnership help bring people from different sides of the dorm together who might not interact otherwise,” said junior Hayley Faber, a KHvR CPC from Elkhorn, Neb.

Over the years, Calvin students have raised thousands of dollars for local organizations by selling each other premium parking spaces, snow-scraping services and hugs in residence hall service auctions. And it’s not always the big dorms that raise the most, said Wise. “Beets-Veenstra is the smallest dorm, but consistently raises the most money,” he said, looking at a chart with proceeds from the past four years. There’s no pressure on dorms to raise certain amounts of money for their community partnerships, Wise added. “It’s more the thought, you know,” he said. “It’s a continuation of volunteer service.”

Orange from Camp Fire USA doesn’t like putting a monetary value on what Calvin students do for her organization either:

“The monetary contribution is great … because we can use that to do some special things. The site coordinators can plan a fieldtrip with students that they otherwise wouldn’t have had the funds to do. But even without those dollars, you just can’t put a price on the time Calvin students spend with the kids,” she said.

Note: the price tag to see a resident director whip creamed? A bid of $50 or more.