We Are Calvin: Ryan Struyk 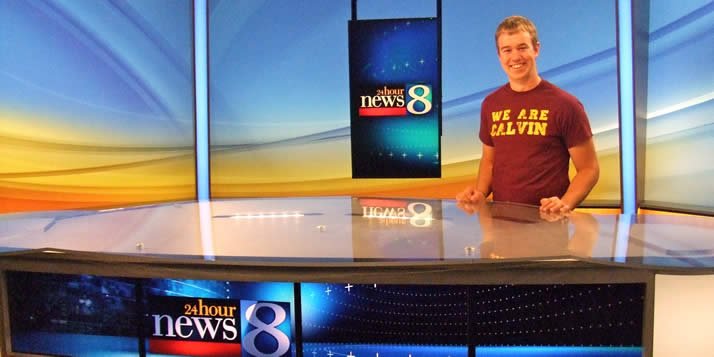 Every summer, hundreds of Calvin students scatter across the U.S. and around the world, researching, interning and exploring. This summer, some of these students are keeping us informed about their adventures. Next up: senior Ryan Struyk of Ada, Mich., a political science and mathematics double major at Calvin College. This summer, Ryan is interning at west Michigan's NBC affiliate.

My home base is the WOODTV newsroom near downtown Grand Rapids, but I've been everywhere from Kalamazoo to Muskegon on a given day.

I'm a newsroom intern with WOODTV this summer, getting some hands-on experience in journalism in general and also getting a taste of television news.

There's really no such thing, which is my favorite part of the job. Every day starts off with a news meeting where reporters and producers throw around story ideas and get assignments. Some days I'll go out with a reporter on a story; other days I'll stay in the newsroom and help with the noon show. There's an afternoon news meeting too, but I'm usually either out on a story or helping piece together clips and scripts for the five or six o'clock shows. The day ends watching our work hit the air, and we do it all over again the next day.

What (technically) are you doing?

I'm helping identify ideas for b-roll with photographers, piecing together vo-sots and choosing verbatims for packages. I'm writing scripts for some packages and some wire copy for the noon, five and six. I'm also helping write web copy from scripts and packages.

Helping produce the news. I make calls for stories, help our video guys edit stuff together, and write scripts for the anchors to say on the air. Also, I'll often watch a reporter's footage for TV and then write a web story based on their footage and interviews.

The most helpful thing Calvin has taught me is how to think well. A good journalist has to know a little bit about everything, and Calvin’s liberal arts education has given me a base of knowledge that a lot of other folks don’t have. I’ve actually never taken a video class in my life and I’ve taken only two journalism classes, so a lot of the other broadcasting majors have a leg up on me there. But when it comes to understanding a 70-page lawsuit or running a statistical test on our readership data, I’m glad I’ve got political science and math degrees up my sleeve.

I actually found a way to use my math major at my internship. We’ve been seeing some shifts in our online readership data over the last two years, and I crunched some numbers for our digital director and ran some tests to see whether the shifts were statistically significant. Who knew, there’s even a place for math geeks in journalism!

How do you see this shaping your future?

It’s given me a great taste of what television journalism is like. It’s a fast pace and it’s something new every day, which I love. It’s also given me great connections to some of the best in the business. I’m still undecided about whether television news is for me, but I think it’s given me all the information I need to make a good decision about it.

I left the newsroom around 11:30 one day to cover a preliminary hearing for a criminal sexual conduct case and the trial ended up going until 3:00. I hadn't had lunch yet and I was starving. We stopped at Subway at 3:30 and it was one of the best sandwiches I've tasted in my entire life.

Part of our internship is helping run Maranda's Park Parties each week, in which organizations and businesses set up booths and games at an event for the community to attend. McDonald's was one of the sponsors and I got my picture with Ronald McDonald. Best profile picture ever.

I was live-Tweeting a preliminary hearing for a guy charged with six counts of criminal sexual conduct. His last name is “Dengel.” About halfway through, I got mixed up and started tweeting “Dregel.” Meanwhile, folks back in the newsroom were following my live-Tweet and writing a web story from it. When I got back, I got several comments on how the “Dregel” trial went. It was actually the same day I didn’t eat lunch until 3:30, so I blame that.

The most memorable person I met was on my first day. The day before, a woman had been run over and killed while she was trying to help someone who was in a car accident. We went to talk with her husband and I’ll never forget that man sobbing while we talked with him on the porch about his wife. It was such a wake-up call to the real pain and hurt in the stories that we see almost every day, as well as the emotional stamina that reporters need to have.