We Are Calvin: Kelly Doles 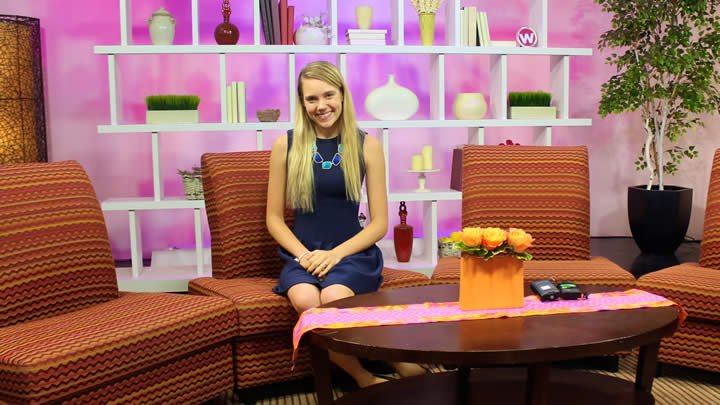 Kelly Doles on the set of eightWest

I am interning at WOODTV/WOTV for eightWest and Maranda Where You Live.

It usually begins with a meeting, then we tape eightWest at nine. Once eightWest is over, I go out on shoots with one of the hosts, or I help out in the office. After finishing my afternoon tasks, we tape Maranda Where You Live.

What are you doing?

I arrive at the studio at 8 a.m. Around 8:30 the producer goes over the rundown (the rundown is like a spark notes version of the show where the producers tells us about the order of the show and the guests who will be coming in). After the rundown, the secretary texts me every time a guest arrives, and I guide the guests through the building and bring them to the studio; once they are comfortable, I'll bring them coffee or chat with them, or I help them set up any props they bring in. I usually like to find ways to settle their nerves before they go on air, so I will ask them questions or encourage them. After each segment, I take a picture of the guests with the hosts, which can be used for WOODTV/WOTV's social media pages. Once the show wraps up, I help with the clean up process, and then I get to tag along on a shoot, or do some research for future packages.

Since I am used to doing a broad range of tasks and assignments for my liberal arts classes, I have picked up on many helpful bits of information from classes I normally wouldn't have signed up for. Calvin's liberal arts education has also given me the mindset that every job and every subject is important, so I approach every task I am handed with a positive attitude. I do everything from making appearances on air to sorting t-shirts, and I never feel like any of it is a task too small or insignificant. Calvin has also taught me a lot through classes that involve a lot of hands-on learning, and this has motivated me to learn through doing; Calvin has taught me how to be an active learner and how to engage every task and person I encounter.

To see how many things need to get done behind the scenes. When people watch eightWest and Maranda Where You Live, it's easy to focus on the beautiful hosts and the fun things they do in front of the camera. In reality, there are so many people who work really hard to make the shows happen.

How do you see this experience shaping your future?

This internship is such a blessing. I have definitely seen it influence me as a person and as a student. I have gained a new appreciation for people. Everyone works so hard, and it's so cool to see all of their efforts coming together to create the shows. I have learned the importance of carrying a gentle boldness; I have learned how to come out of my shell and assert myself in a kind way when I want to learn something new. I have learned a lot from one of the hosts, Maranda. Maranda goes out of her way to let everyone know that they are appreciated; she is always complementing people on the things they do and showing a genuine interest in them. Maranda's encouragement and attentiveness are contagious, and it's something that I want to take with me into the workplace. I have also learned how to work with so many different types of people, so I have gotten practice with tailoring my approach with those around me.

This one's for all "The Bachelorette" fans out there. Last week I played tour guide and greeter for Bradley Wisk, the opera singer from this season (and nervously prepared coffee for his publicist)

I've been known to trip over water coolers while attempting to engage in professional conversation with a few co-workers.