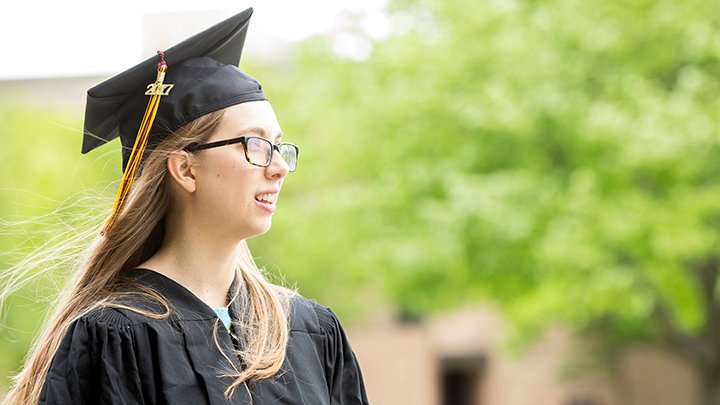 This summer, we’re following the class of 2017: Calvin graduates who are journeying around the corner and across the globe. Sarah Witt is studying veterinary medicine at the University of Edinburgh’s Royal (Dick) School of Veterinary Medicine.

What’s one class or professor that had a profound impact on your journey? How so?

My biochemistry classes were eye-opening for me. The minute we began diving into the material I knew I was in the right place. I was excited and engaged in the science in a way I had never been in any other class. A big reason for that was because of the amazing professors I had, Professors Larry Louters and Brendan Looyenga, who made the information exciting, accessible and challenging so that I wanted to put my best effort in.

I am about to move across the world, to a new culture and university, but also for the first time in my life to a school that is not predominantly Christian. Calvin has helped me become deeper in my faith and understand what it means to be a Christian scientist. I am nervous about this big change and will miss the security and community I experienced at Calvin, but also know that my time at Calvin has prepared me well both academically and spiritually.

What about Calvin specifically prepared you for this next step in your journey?

Without the opportunity to go abroad during interim, I don’t think I ever would have considered going abroad for veterinary school. My three weeks on London with my fellow students and Bud Bouma were instrumental in pushing me take this big step. Going abroad during interim was perfect, because it wasn’t as big of a commitment as a semester and also not as expensive, but still allowed me to experience a new culture enough that I want more.

What part of Calvin’s mission resonates with you, and why?

The first part of Calvin’s mission is what speaks to me the most—to think deeply. My ability to “think deeply” was fostered throughout my time at Calvin, not only in my major-specific classes but in my core classes. I actively sought out a liberal arts education, and Calvin was able to fulfill that. In all of my classes—from chemistry and biology courses to philosophy, women’s self-defense and literature—I found myself challenged in different ways that encouraged me to think deeply and make connections that I would not have on my own.

The success of Calvin grads goes beyond job titles, salaries, graduate degrees and employers as they pursue God's call on their lives. Still, the results are clear: Calvin grads get good jobs at places like Google, Pixar, National Geographic and Boeing, earn higher mid-career salaries than grads from other private colleges in Michigan (according to Payscale.com) and attend some of the best graduate schools in the country. Explore their stories.