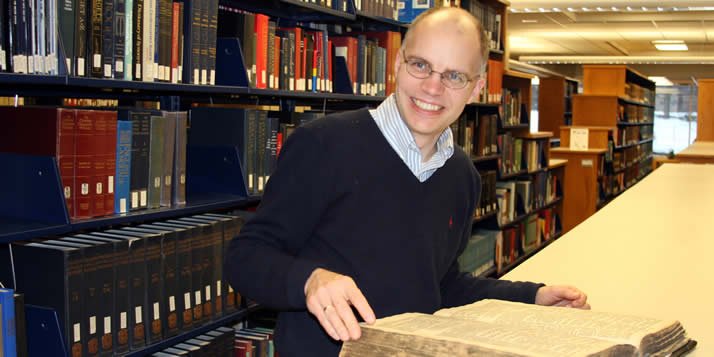 To understand the medieval Christian fascination with the Hebrew Bible, Frans van Liere will study where Einstein studied.

To get his hands on a Hebrew manuscript of the Old Testament, a monk living in the 12th century A.D. would need to visit his local synagogue, said Calvin history professor Frans van Liere. In pursuit of scriptural authenticity, many medieval monks did visit local synagogues, he added, and they ended up in debates with local rabbis:

“They got more than they bargained for,” Van Liere said.

From the medieval Christian fascination with the Hebrew Bible—and all that came of it—Van Liere has developed a scholarly enterprise. In pursuit of that enterprise, he’ll spend his fall sabbatical as a member of the Institute for Advanced Study at Princeton. He’ll be developing a book on the subject.

The medieval Christian fascination with Hebrew scriptures can be traced back to the fifth-century saint Jerome, Van Liere explained, whose Latin translation of the Old Testament was based on a Hebrew text. Prior to Jerome’s Vulgate, translators had drawn their Old Testament translation from the Septuagint—a Greek version based on the Hebrew original. Inspired by Jerome’s argument that authentic scriptural translations must be drawn from the original source materials, many medieval translators sought out Hebrew scriptural texts—and Jewish scholars who could elucidate them.

Medieval Christians faced myriad challenges in their quest for a more authentic word. The Hebrew Bible originally was written without vowels. Over time, a tradition had evolved about how to pronounce it: the Masorah. Eventually, the Masorah became the means of interpreting the written scripture as well. But even within that tradition, there was room for debate over how to translate certain words. To make sense of their scriptures, Jewish scholars relied on the Talmud, a vast collection of rabbinical discussions about the Torah (the first five books of the Hebrew Bible.)

Also, the Christian scholars who came seeking an authoritative version of the Hebrew Bible discovered that Christians and Jews had fundamentally different ideas about the historical context of that text: “Christians saw the Old Testament as a prophecy of the coming of Christ,” Van Liere said, “and Jews saw the Old Testament as a way to live according to the laws of Moses.”

Ultimately, the Christian scholars who searched in the Hebrew tradition for answers found more questions instead: “It led to debate between Christians and Jews, but it also led Christians to debate about their own position in salvation history,” Van Liere said. Eventually, the Christian anxiety about matters of faith expressed itself in hatred of Jews. In 1246, Christians put the Talmud on trial and found it blasphemous and burned it.

Van Liere’s sabbatical project is to study how the medieval Christians’ preoccupation with Hebrew scripture affected their relationships with Jews as well as their own Christian faith. He will be researching in a place notable for its alumni: “The Institute for Advanced Study is where Albert Einstein studied when he came to the United States—so there aren’t a lot of dummies who get invited there,” said Calvin history professor Bruce Berglund. (J. Robert Oppenheimer also studied at the institute.)

“In a way, I’m going back to an old stomping ground,” Van Liere said. When he first came from the Netherlands to America in 1994, he worked as a research assistant at the Institute. He and his wife Kate (whom he met at a manuscript library in Salamanca, Spain), spent their first year as a married couple in the college town. The fellowship provides half of his sabbatical salary and a subsidized apartment. “Princeton is not a bad place to be if you’re on sabbatical,” he said.

To study the texts that captivated both Christian and Jewish scholars requires a fair mastery of Latin and Hebrew, Van Liere said. “My Latin is okay, but my Hebrew is getting a bit rusty, I’m afraid,” he said, smiling. 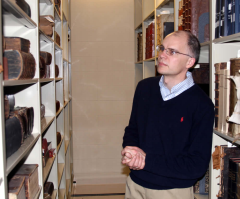