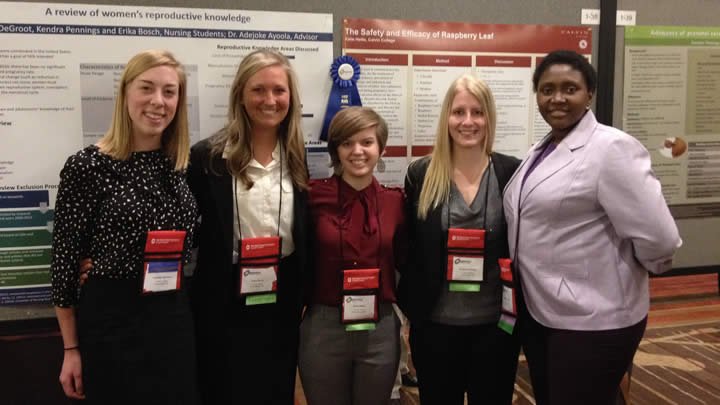 Three Calvin nursing majors received awards for their research at the Midwest Nursing Research Society (MNRS) conference—one of the biggest conferences of its kind in the country—over spring break.

For Calvin senior Kendra Pennings, who received the Women and Childbearing Section Undergraduate Student Award for her paper on prenatal care for low-income women, the honor came as a complete surprise.

“I actually had no idea my professor had submitted my research, so I was really surprised when I found out I was getting the award. But this conference is a big deal, so I was really excited,” Pennings said.

During the summer of her sophomore year, Pennings began looking at the healthcare options for African American women who wanted to start prenatal care early.

“These women would call in and ask for a doctor appointment, and the doctor would say that they couldn’t schedule anything for ten weeks, which caused a lot of frustration,” Pennings explained.

For her honors project, Pennings decided to continue researching healthcare options for women, this time with a focus on access to prenatal care among low-income women.

"I was interested in low-income women and their access to healthcare, especially prenatal care. I found transportation was an issue. Social support was also an issue. If a woman’s partner doesn’t think prenatal care is important, she won’t get any. Women who have children already are also less likely to seek care, so these are all factors in the decision to get prenatal care,” Pennings said.

While Pennings started researching prenatal care because Ayoola specializes in it, she has always been drawn to the social aspects of medicine.

“I’ve always been fascinated by people and people’s stories. I love listening to people’s stories. It amazes me how much a person’s story informs the health decisions they make. Sometimes we tend to think of the person and their health independently, but I think that’s a mistake,” she said.

Pennings, who will graduate from Calvin this spring, hopes to continue studying how life experiences and socioeconomic status impact health as a PhD student at Michigan State University. She says attending the MNRS conference got her even more excited about entering the field of nursing.

“I think the conference is a really good place for stimulating ideas. You sit there and think, ‘oh, I didn’t think about it that way!’ I actually e-mailed two of the professors I saw speak at the conference and said I was interested in knowing more about their work. Both e-mailed back within three days. It’s amazing to have access to all these really top quality researchers,” Pennings said.

Pennings noted that the conference was also a great opportunity to represent Calvin on a national stage.