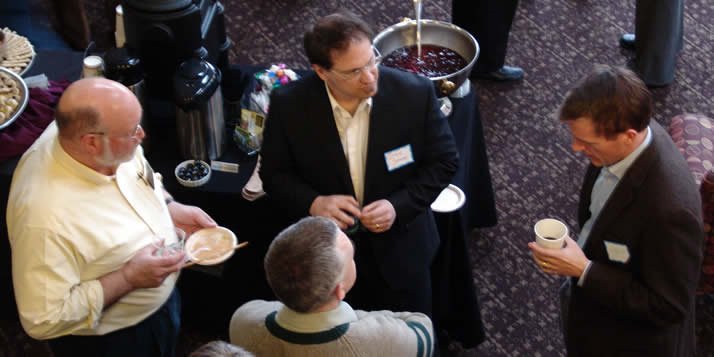 Scholars from many disciplines and many countries make Calvin a research home away from home.

On February 7th, the Calvin community came together in the Spoelhof Atrium to celebrate seven individuals who have come from as nearby as Tennessee and as far away as Nanjing, China. They also came from California, Norway, Scotland and Zimbabwe. The group is known as the Visiting Scholars, and they are spending their time at Calvin working on various professional projects.

“We have many fascinating visitors with us this year, so I want to invite you to make connections and have some good conversations,” Calvin provost Claudia Beversluis encouraged the group at the reception.

The scholars began by talking about the weather and their hometowns. For Richard Nenge, a theologian visiting from Harare, Zimbabwe, this was the first time he has seen snow. But for Rune and Vigdis Øystese, professors at NLA University College in Bergen, Norway, a few inches of snow is not much at all.

The scholars also talked about the research they were doing.

Three of them are being hosted by the Calvin Institute of Christian Worship: Andrew McCoy, Lisa De Boer and Steven Guthrie. Since 2010, McCoy, who holds a PhD in Theology from the University of St. Andrews, has been studying the Psalms with a specific focus on the theology of Christian worship amidst suffering. De Boer, an art historian from Westmont College in California, is researching the role of the visual arts in American churches over the last 60 years. Guthrie has come from Belmont University to research the theology and the cognitive science of music.

The Øysteses are guests of the Kuyers Institute. Rune is researching the collaboration between the church and the home in helping children develop a healthy and mature Christian identity, and Vigdis is working on her doctoral thesis, which focuses on imagery in hymns used by the Church of Norway.

The last two visitors are hosted by the Nagel Institute, one from China and the other from Zimbabwe. Lifeng Zhang is studying the metaphysics of modality and the philosophy of religion, and Richard Nenge is looking into the link between the impact of women’s roles in the Bible and the treatment of HIV/AIDS

The Visiting Scholars program allows different scholars from around the world to come to Calvin and conduct research—often in theological and Christian subjects. The scholars choose their own projects, and Calvin gives them the resources they need and a place to work.

“The program brings people to Calvin to collaborate with faculty who have similar interests,” said Matthew Walhout, dean of the office for research and scholarship, “and this turns out to be a great thing for the Calvin community and the visitor.

Calvin doesn’t pay the scholars; they are compensated by their original institutions. Many of the visitors are on sabbaticals or research trips, and, typically, they will be at the college for several months, even several years. Often, the visitors help out around Calvin by contributing to classes and aiding professors in their own research.

A big portion of the Visiting Scholars program is administrative operation; dealing with the nuts and bolts of moving a person to Calvin and helping them to settle in with resources needed for their research. With international visitors, dealing with travel visas can be especially complex. However, many different departments and institutes pitch in to make sure the program works without any bumps. Each visiting scholar requires a contact: someone at Calvin to help out with any questions and all the little details that come with moving and adjusting to a new place:

“The important thing is to figure out what they need, in terms of essential items, so as not to overwhelm them,” said Mary Bennett, the program coordinator for Seminars for Christian Scholarship who helped to get Nenge settled at Calvin. “Things like going to the grocery store, taking the bus, a campus tour, connecting with the library, connecting with people on campus to help them with different things, and teaching them to use appliances that they might not have in their home country.”

The relationships benefit both the visitor and Calvin: “Welcoming Rune and Vigdis Øystese to campus is an excellent opportunity to continue to strengthen relationships with the Norsk Laererakademie, a Christian college in Bergen, which has been gradually growing over the last few years,” said David Smith, Director of the Kuyers Institute and host to the Øysteses. “It gives our Norwegian colleagues a chance to learn more about how we do Christian education here.”

The Visiting Scholars program has been around since 2005, but in recent years, it has grown drastically. In the beginning, only two scholars at a time were allowed to visit Calvin, and they were hosted through the provost’s office. The CICW has facilitated much of this growth by bringing in more visitors, with other departments and groups at Calvin following suit.

“They bring new voices and fresh perspectives to our campus conversations,” said philosophy professor James Smith, host to De Boer and Guthrie, “and thus enliven the intellectual climate on campus.” 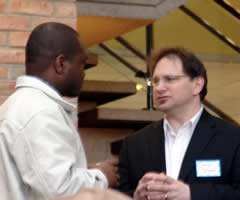 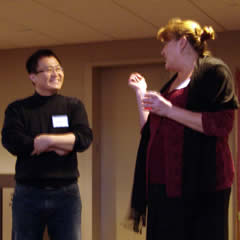