Study shows your media habits are linked to your voter participation 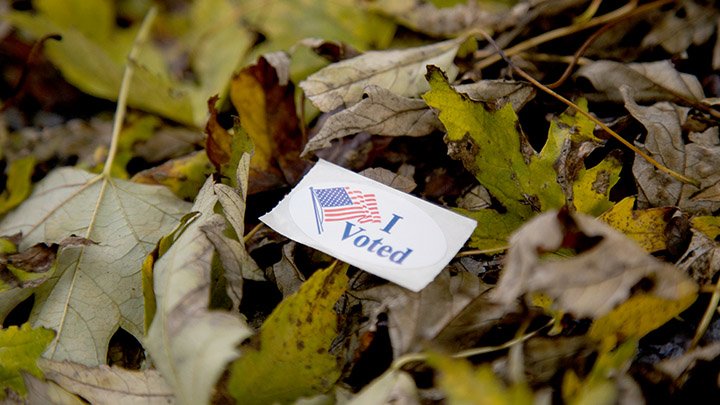 In 2016, 43-percent of the eligible voting population chose not to cast a ballot. That’s roughly 100 million adults who decided to stay home on election day.

The big question is why?

Jesse Holcomb, a professor of journalism and communication at Calvin University is determined to help discover the answer to that question.

Today, he and his co-investigators, Taylor Hartson ’19 a research specialist with the Center for Social Research at Calvin University and Matthew Bone ’20, published a report that digs deep into non-voters’ news diets to explore the role that the media plays in their views toward voting. It marks the third media-related research project that the three have worked on together in recent years.

“This report was using data from the bigger 100 million project,” said Holcomb, “so we took another bite out of the apple.”

The 100 million project was commissioned by the John S. and James L. Knight Foundation, a premier American philanthropic organization dedicated to journalism and civic life. The project surveyed 12,000 American non-voters to understand why they don’t vote. It was an attempt to understand their behaviors and attitudes.

Using the data from this broader project, Holcomb and his team made some key discoveries.

Holcomb’s team also found that non-voters whose main sources of news is social media are less likely to vote in the future and also less likely to think that voting is going to make a difference. While Holcomb says the data doesn’t reveal with certainty the “why,” he offers some informed speculation.

“We do know from other research that social media lends itself to be very casual information, grazing. People who read newspapers will be civically engaged and are more likely to vote. They’re getting a more concentrated dose of public affairs reporting,” said Holcomb. “On the other hand, in social media you have an ambient news experience, it’s a lean back experience as opposed to a lean forward, you don’t seek news, you happen to bump into news there.”

“Another reason is that we know that social media is like a hall of mirrors, it’s hard to know what is true, what is not, and social media platforms tend to amplify misinformation in ways other news sources don’t always do. So, a negative news experience, might be a turn off. Again, the data from this study isn’t crystal clear on this, though other research supports these explanations.”

But what is crystal clear is having a deeper understanding of news media habits of non-voters can and should provide insight into how to create a path for more non-voters to get to the ballot box in 2020 and beyond.

“The fact is fewer than 1 in 10 non-voters prefer newspaper content, either online or in print. More and more non-voters are spending time with social media and I don’t see that changing anytime soon,” said Holcomb. “I would suggest news editors, publishers, and reporters use their efforts to meet non-voters where they are at. Rather than try to get them to their traditional platforms, it is important for them to inhabit social platforms and try to make them healthier information environments.”

Founded in 1876, Calvin University is a top-ranked, liberal arts university that equips its nearly 3,300 students from 46 U.S. states, 66 countries, and four Canadian provinces to think deeply, to act justly, and to live wholeheartedly as Christ’s agents of renewal in the world. Calvin offers 100+ majors and programs, including graduate-level offerings in accounting, education, geographic information science, media and strategic communication, speech pathology and audiology. Calvin students engage in intensive internships, community-based service learning, and significant research that results in publishing and presenting alongside world-class faculty. The university’s 400-acre campus is located in the vibrant city of Grand Rapids, Michigan. Discover more at calvin.edu.