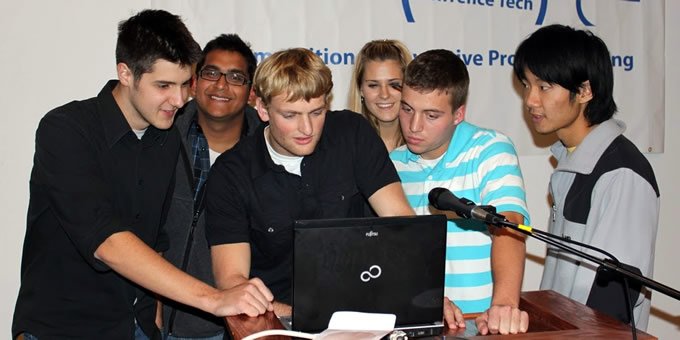 Senior Megan Odegaard, along with her classmates Peter Kraker, Tyler Helmus, Andrew Dykhuis, Meng “Lake” Chen and Gabe Adhikary, competed against five other schools to develop an application that would allow a user to control a car through a smartphone or an iPad. Each team also came up with a business plan and marketing strategy for their product.

The Calvin team took first place and returned home with $1000.

“When they called our name, our jaws dropped,” Odegaard said. “We were competing against technological schools. We didn’t think there was any way we could beat them. But we really came up with the best business plan—we were the only group that had both short-term and long-term marketing solutions.”

Engineering professor Randall Brouwer started recruiting students for Innovation Encounter from the business, computer science and engineering departments during the spring 2010 semester. Both he and Odegaard believe that the main reason Calvin took first place was because its team was so diverse.

“Most other teams only had maybe one business person—all the others were engineers,” Odegaard said, “but we had an accounting major, a business major, a computer scientist and three engineers.”

Brouwer also credits the team’s organization. “I had one of the judges come up to me after the competition and say that our students were more efficient and worked better together than the other schools’ teams,” he said.

Odegaard agreed. “I think we were the most organized team,” she said. “The night before the competition, we made a timeline of what we wanted to have accomplished by what time. We only had five hours to put our project together, and five hours goes by fast!”

In the months before the competition took place, Lawrence Technological University hosted several webinars to prepare all of the competing students for the challenge they were going to face. “Even back then,” Brouwer recalled, “our team was always on time, and our technology was always up and running. The other schools wouldn’t always have their whole team there, or they would struggle to use the technology.”

“When we were figuring out how to organize our team, that definitely brought the liberal arts education together for me,” Odegaard said. “When we were learning how to cooperate, I got to know the value of appreciating and understanding other thought processes.” 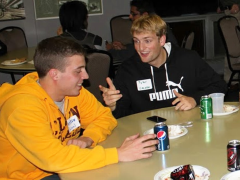