From the field to the lab

Growing up on an Iowa farm, Calvin College professor of chemistry Ron Blankespoor was sure he'd become a farmer someday, perhaps taking over his dad Henry's 240-acre homestead.

He remembers taking biology as a sophomore at Western Christian High School in Hull, Iowa, and filling out a form that included a question about career aspirations. "I remember putting down farmer," he says with a smile some 35 years later. By his junior year however, his aspirations had changed. Taking part in a high school chemistry class, he thought "hey, this is for me."

That change of heart ultimately led Blankespoor to a bachelor's degree (with a major in chemistry) at Dordt College in Iowa and a Ph.D. (with a major in organic chemistry) at Iowa State and then teaching jobs at Wisconsin-Oshkosh and Wake Forest in North Carolina before his arrival at Calvin in 1977, where he's been ever since.

Although he's been away from the farm for over 30 years, many of the lessons of the land are responsible for shaping the man who will be announced tonight (February 8) as the 1995-96 recipient of the Calvin College Presidential Award for Exemplary Teaching, an award that was instituted in 1993 as a way to honor outstanding teaching and service to the college.

The Presidential Award for Exemplary Teaching does not mark the first time Blankespoor has been honored for his achievements in the classroom. In 1977 he was honored with Wake Forest's Award for Excellence in Teaching, an award that took him by surprise.

"I remember I was at work, dressed pretty casually," he says. "There was an honor's convocation that day and I hadn't planned to go, but the chair of our department kept coming by telling me I should attend, the speaker was going to be excellent, that sort of thing. So finally he said 'I'll get you a robe; let's go' and I agreed. I threw my robe over my jeans and that's how I got the award. I was stunned and a little embarrassed."

Blankespoor will receive the Calvin award with a little more forewarning. He was told of the honor about two weeks ago. That doesn't make the event any less heady, however.

"When think about the many professors here at Calvin who are deserving of the award, it makes me feel humbled," he says. "There are many excellent teachers at this school. To be selected to receive this award is quite an honor."

Many of Blankespoor's colleagues referred to his dedication in writing letters of recommendation and testimony for him. That quality is part of what Blankespoor recalls as a pretty good education as a farm kid, when he learned about perseverance and hard work.

The lessons of the farm included a good dose of humility as well, a quality that also has stuck with Blankespoor. An incident when he was just a young boy is still fresh in his mind.

"I remember getting my first ticket when I was 12," Blankespoor says. "When you're a farm kid you're always driving vehicles, it's no big deal. Well this one day a friend of my sister was out at the farm and needed a ride home but she couldn't drive a stick. Nobody else was around, so I ended up giving her a ride. Well I had a tail light out on the pickup and driving by this little town a cop pulled me over. When he came to the front of the vehicle and saw a small boy at the wheel, he started laughing, but oh was I scared. The worst thing about the incident was that it was the first month that the local paper published traffic citations, so there it appeared the next week that Ron Blankespoor was given a ticket for failure to have an operator's license."

Other lessons were less embarrassing and more significant.

"You grow up early on the farm," Blankespoor says. "When you were 15 or 16 years of age you were in there with the adults doing the heavy work. I guess you develop a pretty good work ethic in that kind of situation. My mother (Della) was a real inspiration to me growing up. She would get up at 5 or 6 in the morning and work until she went to bed at night. I think I–and my five siblings–all learned that lesson pretty well."

Blankespoor credits his two brothers, both older, for inspiring him not only to work hard, but also to dream of a career in the sciences. That turning point between his sophomore and junior year, he feels, came largely because his brothers were both in college studying the sciences and would come home excited about the careers they envisioned for themselves.

Interestingly enough, the oldest Blankespoor, Gilbert, is a Calvin graduate who now teaches biology at Augustana, S.D., (where he received a Teaching Excellence and Campus Leadership Award) while the second-oldest Blankespoor boy, Harvey, went to Dordt and Westmar in Iowa, and now teaches biology at Hope College (where he was honored as National Professor of the Year).

Taking joy in the work

Blankespoor's philosophy of teaching is pretty simple. "Teaching must always be first and foremost," he says, "but there also should be research. And indeed for us in the sciences, research is an important learning experience for our students who work with us in the laboratory. Teaching and research really are synergistic -- each one supports the other. The beauty of a place like Calvin is not only that one is able and encouraged to do both of these, but also that one can do them within a Christian community."

The child-like excitement with chemistry, that enthusiasm that first began to percolate back in 11th grade, permeates all that Blankespoor does and, in fact, is a big part of why he is such a loved and respected teacher and colleague.

Visiting with him in one of Calvin's labs is all the proof one needs to know that Calvin made the right choice in honoring him with the 1996 Exemplary Teaching Award. As he leads a guest around the room he stops short.

"You may know something about the technology used in this instrument," he tells the visitor. "Have you ever heard of an MRI that they use in hospitals? It uses the same technology." Blankespoor hustles to a control panel and brings the instrument to life, sending a slim glass tube into the heart of a large magnet. "It's about 450 degrees below zero in there," he says. He's asked if the temperature is that of liquid nitrogen. "Nope," he answers with a grin. He leans closer to his visitor as though unloading the punchline to a great joke. "Liquid helium," he says simply and then repeats it for emphasis. "Liquid helium."

Sizing up the pure joy in Blankespoor's face it's clear he would have made a pretty good farmer. It's even clearer that where he ended up is where he belongs. And that farming's loss was Calvin's gain. 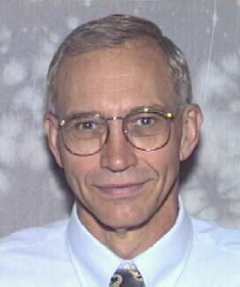