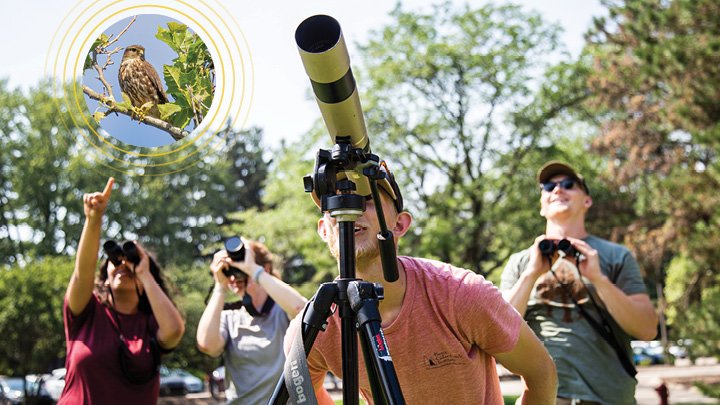 A group of student researchers look for the rare falcons on Calvin's campus.

Stop by Calvin’s campus and you may notice that people are looking to the skies a bit more often than usual. A pair of rare merlin falcons and their three now fledged babies have taken residence on Calvin’s campus, and they are captivating both community birders and researchers alike.

Biology professor William Miller and his team of student researchers first noticed the pair of merlins in June and realized that this was a unique opportunity to observe and gather data on their behaviors. Merlins, a medium-sized falcon roughly the size of a blue jay, are rarely found south of the Upper Peninsula in the summer months.

“It surprised us,” said Miller. “We don’t expect to find a bird like that on campus—so far south of their typical summer range. Merlins usually breed up north in Canada and northern Michigan. Many field guides list them as ‘scarce sightings’ in the Grand Rapids area. To see them here during the summer months is rare, and to have a residential pair on campus is really special!”

The environmental health and conservation student researchers, Andre Kapteyn, Abigail Liebetreu, Emilia Shokoohi, and Andrew Vander Tuig, have enjoyed being able to directly apply the skills they have learned in their courses to this project.

“We go out and we observe the birds for about 30 minutes after the first spotting,” said Shokoohi of their observation process. “If we see it or hear its call, we start the timer. We then watch the movements, listen for its call, and see how it interacts with other birds. We take notes on its behavior like if it is perched, flying, or calling. How dispersed are the calls? How many do we see?”

A wildlife goldmine in an urban setting

Studying wildlife on an urban campus may seem limiting at first thought, but Miller argues that it actually is quite the opposite.

“We have a gem of natural spaces in an urban matrix at Calvin. It’s really one of the things that drew me here as a professor,” said Miller. “The Ecosystem Preserve alone is a really cool natural lab for environmental health and conservation students and other biology programs.”

Every semester, Miller takes his animal ecology class out for a night lab at the Ecosystem Preserve and Native Gardens. Deer, frogs, owls, racoons, salamanders, and squirrels are just a sampling of the wildlife that is available for students to study at Calvin.

“We have a number of vernal pools, little ephemeral wetlands that dry up at certain times of the year that breeding salamanders use,” said Miller, “They breed in these explosive breeding events. If you take your spotlights out on the right night, you can see all these surface-active salamanders that are about a couple inches long just crawling across the ground. You can see things that you don’t usually get to see and experience in an urban environment. Or hundreds and hundreds of wood frogs and chorus frogs making all kinds of a racket in the middle of the night.”

From firsthand study of creatures like frogs, salamanders, and merlins, environmental health and conservation students at Calvin quickly learn about the interconnectedness among all of God’s creations.

“The more I learned about the natural environment, the more I understood the idea of how everything is connected. Each ecosystem is so interconnected that the smallest creatures have an impact on the largest creatures,” said Vander Tuig.

Calvin’s students and professors are not the only ones following their curiosity about the merlins. Real-time data reported on eBird, an online database of bird observations, indicates that many community bird watchers are visiting Calvin’s campus to spy the merlins themselves.

“It has brought me so much joy to see this bird bringing happiness to people,” said Shokoohi. “It makes people’s days to see it. It’s really cool to witness that.”

And it’s in her own backyard. 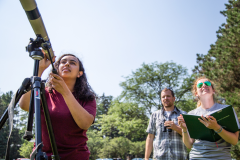 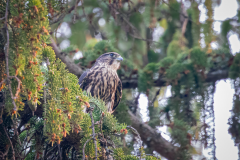 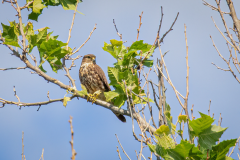