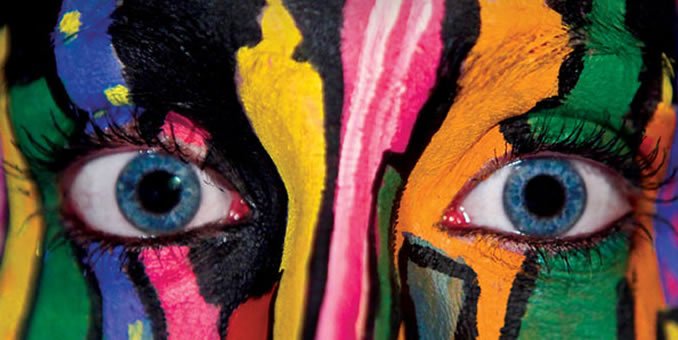 A detail from the Poetic Justice poster

Deep in conversation, Jasmine Riley and Amanda Armour sit at a small table in the basement of Heyns Hall, Riley's home at Calvin. Then Riley arises, moves away from the table several paces, turns and faces Armour, adjusts the hem of her aqua-blue, hooded sweatshirt, looks out onto an imagined audience and begins to speak.

“It says blessed I will be, as one who fears the Lord,” she proclaims. “And, yes, I delight in his commands/ Well—some days I cringe—most days I delight/ because some days I want to fight with these kids/ take them by the shoulders and get it in their head/ that they're worth something./ 'Cause no one else told them that they wouldn’t be better off dead.”

In front of her, Armour nods her head, almost imperceptibly, in rhythm with the words—her words—brought to life by Riley.

And Riley continues: "Uh uh they say, uh uh, no way I’m gonna pass that test/ and in the streets and the violence they find a release/ but even in darkness I see grace and compassion and peace/ Because they keep me coming back every day/ sometimes it only takes one smile or a thank you or some progress/and they've hooked me for awhile."

Armour is smiling as Riley goes on, slowly walking back-and-forth and gesturing now and then while she speaks until she comes to her final words.

"The God of heaven and earth knows they're searching for something/ And I’ll help them find it/ And I’ll walk through metal detectors and I’ll sit with the ones labeled defective and helpless/ And keep me humble in the fight, ’cause they are not the only ones prone to stumble/ And help me to help them, seventeen years old, to write their letters/ You see, there's no fear of bad news and there's no giving up/ There's only hoping for better."

When she is done, she drops her head for just a moment, and then returns to the table. There she and Armour resume their conversation.

"The way you sway, ‘It’s like: Yes! It's so good," Armour, a Calvin senior from Germantown, Wis., says, “and I really like that you added that gesture on ’hooked for a while.’” Laughing, Riley responds: “It just sort of came to me.” Their conversation continues, and together the two work at fine-tuning the words and movements and emotions, figuring out ways to make it all better.

It's a scene they repeated weekly in late October and early November. It's a scene that Riley, playing Saint Jordan, an inner-city teacher, will repeat on Friday and Saturday, November 19 and 20, in the Chapel at Calvin as part of a performance titled Poetic Justice: A Play on Words.

For Armour, hearing her words, sprung from her imagination and written for her characters, brought to life and interpreted by the actors, was a revelatory experience.

“Jasmine brings to Saint Jordan things I could not have predicted,” she said, “things I didn't expect. I wrote the words, but the people like Jasmine breathe some of who they are into the words, and they become something different when they are spoken.”

Riley said the first time she read her part, based on Psalm 112, she had a picture in her mind: someone her character reminded her of.

“Mrs. Harris,” she said, “at Creston High School. She was like Saint Jordan. She was going to make sure we learned what we needed to learn. I thought about her right away when I got my script.”

This is Riley's first foray into performance poetry. A sophomore at Calvin, she transferred this year from Michigan State. She has done some acting before but not this sort of poetry. Armour, on the other hand, has been a poet since first grade, including writing performance poetry in high school. But this production, she admitted, was ambitious even by her standards.

“I knew when I came to Calvin that I wanted to do something like this, but I wasn't sure I could pull it off or how I would do it.”

An interdisciplinary major in English, communication arts and sciences and some religion, Armour decided to make her senior honors project for English 399 an experiment in slam poetry—something she describes as a hybrid of a poetry reading and rap—by recasting the Psalms with an emphasis on themes of urban justice.

So Poetic Justice features Saint Edgar, an old man in a nursing home who offers an adaptation of Psalm 116; Saint Candy, a prostitute rapping about Psalm 22; Saint Alayna, a female prisoner whose words come from Psalm 51; and Saint Jordan, plus four others.

Altogether there are eight different scenes in the play, each somewhere between two and seven minutes, with a final scene that brings all of the characters together on stage for a poem based on Psalm 107.

Armour's honors project advisor, English professor Linda Naranjo-Heubl, agrees that the project is ambitious, but said that Armour has what it takes to pull it off.

“Amanda is an extraordinarily gifted and focused student,” she said. “Her interest and involvement with spoken word poetry took root a few years ago … and the call for justice that is central to her poetry comes out of her education and involvement with the communities that are the subject of her creative work. Consistent with this tradition of poetry, Amanda's honors project must be heard, not read. Quite fittingly, she has produced a performance that is communal in nature: diverse perspectives given voice by diverse performers.”

Armour said that, while the project has been a ton of work, its been worth it.

"It's the kind of homework you always want to do," she said. "It's what you get up in the morning for." 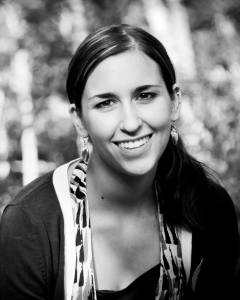 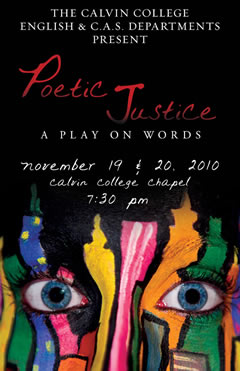 Poetic Justice: A Play on Words is presented by Amanda Armour and her eight-person cast in conjunction with the Calvin departments of English and communication arts and sciences. It will be performed at 7:30 p.m. on November 19 and November 20, 2010 in the Calvin Chapel. Both performances are free and open to the public.