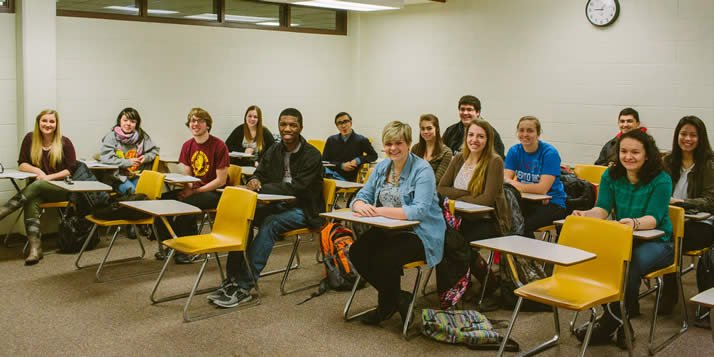 Like many Calvin students, Emily Lawson, Mariana Perez and Ana Ramos are getting ready to head south for spring break. But they are not just taking a trip to escape the frigid Michigan weather. The three freshmen are part of the new John M. Perkins Leadership Fellows program—a program for first-generation college students. The program offers a two-year renewable $2,500 scholarship.

The program is named after John M. Perkins, a sharecropper’s son who grew up in Mississippi amidst dire poverty. After converting to Christianity he established the John M. Perkins Foundation for Reconciliation & Development, Inc. The foundation’s sole purpose: advancing the principles of Christian community development and racial reconciliation throughout the world.

As part of the program at Calvin, all the Perkins Fellows will travel down to Jackson, Miss., during spring break. The trip, one of 10 different service-oriented spring break trips involving 140 Calvin students this year, will focus on servant leadership and community development. The fellows will be working with the Spencer Perkins Center, a branch of the John M. Perkins Foundation devoted to serving youth.

Sarah Stripp, a senior at Calvin and the student leader of the trip, worked at the Spencer Perkins Center last summer and plans to return after graduation. She says, “the students will be learning about the Civil Rights history in Jackson, as well as different ways to approach community development in general, especially asset-based community development, which is essentially looking at a community’s strengths, and focusing on those to improve the community.”

The students will also get the chance to spend time with John Perkins, the founder of the Spencer Perkins Center and inspiration for the Perkins Fellowship program. Jeff Bouman, the director of Calvin’s service-learning center helped start the program at Calvin and will be traveling along as a mentor on the trip. He says he believes meeting with Perkins will be a highlight for the students.

“They are going to have the opportunity to sit literally at John Perkins feet,” Bouman said. “Here’s a living legend—someone who knows scripture, and knows how it applies to leadership and social justice issues.”

“I’m really excited about just spending time with Dr. Perkins,” said Lawson. “Because the whole Perkins program is modeled after him, he has kind of become a role model.”

As a first-generation college student, Perez reflected on how his story reminded her of her parents:

“It’s not like he’s this person who went to college. He dropped out in the third grade, so he kind of reminds me of my own parents. His story shows how much difference someone can make with or without an education.”

Despite only having a third grade education, Perkins has played a major part in the Civil Rights movement, the fight against poverty and evangelical efforts. Ramos hopes to learn from his wisdom.

“Every time [Perkins] speaks we’re all listening for nuggets of wisdom,” Ramos said.

In addition to getting to know Perkins, Ramos is looking forward to strengthening her relationships with the other Perkins Fellows during the trip.

“We all know each other, but this will be a chance to grow deeper into our friendships,” she said.

The Perkins Fellows first got to know each other when they took their first year seminar and Developing a Christian Mind (DCM) courses together this past fall. And they will continue to get to know each other through a book club this coming fall. Then, next spring, the fellows will take another class focused on leadership and attend a leadership conference through the Christian Community Development Association.

After that, Bouman says the goal is to launch the fellows into leadership positions all around campus. Some of the students are already taking on leadership roles in the Calvin community. For example, one of the students in the program, Cameron Kritikos, started the Food Recovery Network, which distributes extra food from the dining halls to those in need in the Grand Rapids area.

While the program is still only in its first year, Bouman is optimistic about the impact it’s having on those who are a part of it and excited about what the Perkins Fellows can bring to the Calvin community:

“The program is reciprocal,” said Bouman. “And the fellows bring a different appreciation for the opportunity to learn at Calvin that many of us take for granted.”