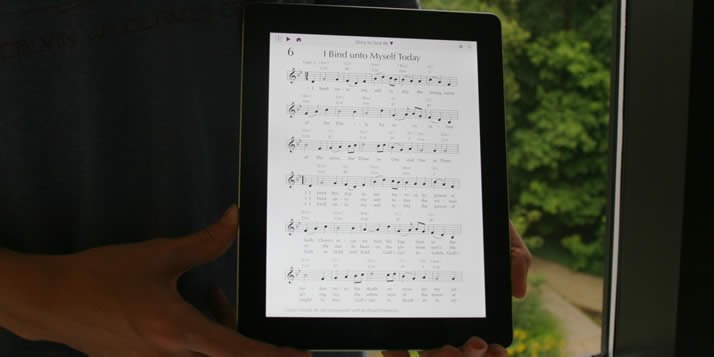 “[The app] is basically a digital version of a hymnal,” explained sophomore computer science major Tyler Dougherty, who has done most of the programming for the app.

But the app is more than just an electronic version of grandma’s hymnal.

A new kind of hymnal

“[Using the app], you can play music along with hymns, find information about the hymn’s history and search through the hymns,” Dougherty noted, adding, “There’s also a tool called flexscore, which allows you to make the hymn text bigger, change the size of the music and change the key of a song for different instruments. “

The app’s blend of classic hymns and new technology builds on the efforts of both Hymnary.org and CCEL to bring hymns and theological classics to the masses through modern technology.

Classics in the digital age

Founded by computer science professor Harry Plantinga in 1993, the CCEL website offers free access to over 1,000 religious classics. CCEL also sells the classics in a number of other formats. Like Hymnary.org, its most recent focus has been on the iPad market.

Launched by CCEL in 2007, Hymnary.org is a searchable hymn database of more than a million songs. The site features not only the text and music, but also composer information, alternate versions of texts and extensive historical information on many hymns.

In addition to the iPad app, the five student employees at CCEL and Hymnary.org this summer are working to make both of these sites more user-friendly and efficient.

Calvin senior Will Groenendyk is modifying the search process on the CCEL website so information about authors is more accessible.

“What’s cool about the new author pages is that if you enter the author’s ID, everything about them automatically pops up,” he said.

Groenendyk, who hopes to pursue a career in software programming when he graduates, feels working at CCEL this summer has helped prepare him for that career.

“I’ve learned so much,” he said. “You learn a lot of theory in the classroom, but I learned a lot of practical stuff [working at CCEL]."

While Dougherty is less sure of his career plans, he appreciated the experience as well.

“I think I have a better grasp of what a real world job in day-to-day programming is like,” he said. “It’s a lot different than classes.”

Groenendyk also enjoyed being able to use his skills for a Christian cause.

“It’s been amazing,” Groenendyk reflected. “The last few summers I’ve worked at public schools, so to be able to work in a Christian setting with all Christian people is awesome.”

While CCEL and Hymnary.org depend on computer science students like Dougherty and Groenendyk for technological help, students from different majors have helped CCEL expand its ministry in other ways.

When CCEL started offering Kindle versions of their books, they needed someone who was familiar with the texts to write book descriptions. So they hired philosophy majors. CCEL has also worked with theatre majors, using them as voice actors when they added audiobooks to their offerings.